As Fast As Words Could Fly

was selected by the Screen Actors Guild Foundation for its latest read aloud on Storyline Online, an interactive literacy website where well-known actors read popular, award-winning children’s books to help students fall in love with reading.

As Fast As Words Could Fly was written by Pamela M. Tuck, illustrated by Eric Velasquez, and read by actor Dulé Hill now on Storyline Online.

END_OF_DOCUMENT_TOKEN_TO_BE_REPLACED

Today is International Day of the World’s Indigenous Peoples! According to the United Nations, the theme this year is “Indigenous Media, Empowering Indigenous Voices.” It’s nice to see indigenous groups being recognized not as ancient civilizations or oppressed minorities, but as powerful, modern communities actively working to shape their futures. To that end, I came across this video from the BBC and thought it was pretty cool:

END_OF_DOCUMENT_TOKEN_TO_BE_REPLACED

From time to time, race issues pop up in advertising. Race is a tricky subject in advertising because common approaches tend to reinforce racial stereotypes and rub people the wrong way if not handled with care.

Sensibilities vary from city to city and from country to country. Since the United States went through the civil rights movement, many Americans are aware of race issues and may recognize on their own when people of color are depicted in an unfavorable light.

In 2010, a KFC ad ran in Australia depicting a lone white fan at a cricket game, surrounded by a rowdy bunch of black West Indians. To restore order, the white cricket fan placates the entire crowd with a bucket of fried chicken. I’ve read commentary from Australians rejecting claims that the ad perpetuates racial stereotypes, but the controversy raised enough public ire that KFC eventually pulled the ad. 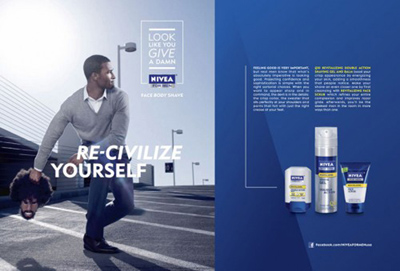 END_OF_DOCUMENT_TOKEN_TO_BE_REPLACED

I love comedy. Not doing comedy, but watching comedy, either in film or stand-up. Laughter is good for the spirit.

I like all kinds of comedians—from early Bill Cosby to Jon Stewart. I especially enjoy comedy that makes you think. Comedy can broach taboo topics like racism and stereotypes and make them fair game for open commentary. If done well, these comedic monologues on race can reveal the absurdity of people’s belief systems.

I searched YouTube for examples of race-based comedy that strikes a nerve and found a wide gamut. Will some of these clips offend some people? Maybe. But if you can push yourself outside your comfort level, looking past the profanity and at times crude subject matter, seriously (or humorously) consider what the comedians are trying to do. Are their jokes healing, even when they point out painful truths? Does a line exist, even for comedians, that should never be crossed, or can anything be made fun of in the context of comedy? Is it easier for a comedian who is a person of color to incorporate race in his/her act?

END_OF_DOCUMENT_TOKEN_TO_BE_REPLACED

A centenarian, chief of his indigenous village on the South Pacific island of Vanuatu, speaks about culture, his life, dying, and changing times:

END_OF_DOCUMENT_TOKEN_TO_BE_REPLACED

Swedish doctor and statistician Hans Rosling illustrates and explains the progression of world health and wealth around the world, tracking 200 countries over 200 years. Disparities between the colonizers and the colonized, the effect of wars, emerging economies—it’s all here:

END_OF_DOCUMENT_TOKEN_TO_BE_REPLACED

This week, we have a moving documentary about the distinction made based on skin color, even within a single culture or ethnic group. It’s long, but it’s worth watching the whole thing, from the interview with a four-year-old girl to the academic perspectives of professors.

END_OF_DOCUMENT_TOKEN_TO_BE_REPLACED

Via Laughing Squid, our video of the week celebrates a playful love of books:

END_OF_DOCUMENT_TOKEN_TO_BE_REPLACED

We know we’ve done something right when readers share their excitement for our books with the entire Internet. Amy Cheney, librarian at Alameda County Juvenile Justice Center, is one of those excited readers: she made a video with other staff at the ACJJC, all explaining why they love Yummy and why it’s great for the kids they work with every day.

END_OF_DOCUMENT_TOKEN_TO_BE_REPLACED

Who We Are
Requesting Review Copies
Lee & Low Books
END_OF_DOCUMENT_TOKEN_TO_BE_REPLACED