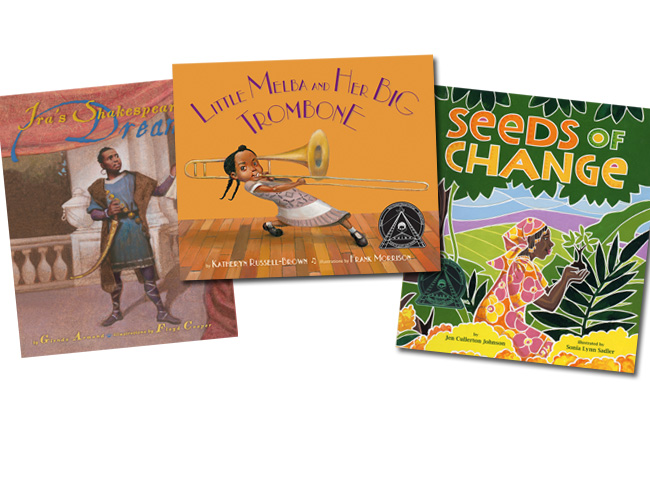 February is Black History Month, which was created to remember the important people and events in the history of the African diaspora and to honor the too-often neglected accomplishments of black Americans in every area of endeavor throughout our history. While ethnic heritage months can be problematic, they are also a good reminder to highlight the achievements of particular cultures, and can make people from those cultures feel acknowledged and appreciated. In this blog post, we’ve rounded up some of our best Black History Month resources.  END_OF_DOCUMENT_TOKEN_TO_BE_REPLACED

February is almost upon us! At Lee & Low, we believe that Black history is American history and should be celebrated and taught all year long. But February can be a great time to shine a spotlight on favorite books or freshen up a dated collection with new titles. Here are eight of our favorite Black History Month Books for kindergarten through second grade: END_OF_DOCUMENT_TOKEN_TO_BE_REPLACED

Today on the blog we are honored to be able to interview Joseph McGill, Founder of the Slave Dwelling Project, which works to preserve extant slave dwellings and organizes overnight stays in them to bring attention to the history and experiences of enslaved people. Welcome, Mr. McGill! END_OF_DOCUMENT_TOKEN_TO_BE_REPLACED

The month of February is a time when many communities pause and celebrate the great contributions made by African Americans in history. At Lee & Low we like to not only highlight African Americans who have made a difference, but also explore the diverse experiences of black culture throughout history, from the struggle for freedom in the South and the fight for civil rights to the lively rhythms of New Orleans jazz and the cultural explosion of the Harlem Renaissance.

END_OF_DOCUMENT_TOKEN_TO_BE_REPLACED

Today, heritage months can be a double-edged sword. On one hand, relegating culturally diverse books to specific months of the year can mean these books are overlooked the rest of the year. It can also separate Black history from American history, when in fact black history is American history. END_OF_DOCUMENT_TOKEN_TO_BE_REPLACED

It’s baseball season again. It’s also the 10th anniversary of Catching the Moon: The Story of a Young Girl’s Baseball Dream written by Crystal Hubbard and illustrated by Randy DuBurke. How can you celebrate both?

END_OF_DOCUMENT_TOKEN_TO_BE_REPLACED

In this guest post, Dr. Henrietta M. Smith, Professor Emerita and the first African-American professor at the University of South Florida, School of Information shares her memories of how the Coretta Scott King Award began:

The news of the damage sustained by the boardwalk in Atlantic City during Hurricane Sandy brought back memories of where the Coretta Scott King Award started. This writer’s mind went back to an earlier time, to an American Library Association annual meeting in Atlantic City.

The year was 1969. Two librarians walking through the exhibit hall stopped by a booth where a poster of the late Martin Luther King Jr. was on display. This was the start of a genial conversation that evolved into the observation that never since the inception of the Newbery Medal in 1922 and the Caldecott Medal in 1938 had any award committee recognized the work of a person of color.

John Carroll, a publisher from a small company in New York, overheard the conversation. It was reported that he said, rather matter of factly, “Then why don’t you ladies establish your own award?” The seed was planted. Before the conference ended, in an informal meeting on the boardwalk in Atlantic City under the leadership of Glyndon Greer and Mabel McKissick, the idea of a award for African American authors was shared with a group of African American librarians, including Augusta Baker, Charlemae Rollins, Ella Mae Yates, and Virginia Lacy Jones, to name a few. At this seaside gathering, the struggle for recognition began.

END_OF_DOCUMENT_TOKEN_TO_BE_REPLACED

Everyone knows Frederick Douglass and Martin Luther King, Jr., but there are many other African Americans who have contributed to the rich fabric of our country but whose names have fallen through the cracks of history.

We’ve asked some of our authors who chose to write biographies of these talented leaders why we should remember them. We’ll feature their answers throughout Black History Month.

END_OF_DOCUMENT_TOKEN_TO_BE_REPLACED

Who We Are
Requesting Review Copies
Lee & Low Books
END_OF_DOCUMENT_TOKEN_TO_BE_REPLACED