Out last fall from LEE & LOW BOOKS, Ira’s Shakespeare Dream is a picture book biography that tells the story of Ira Aldridge, an African-American actor who defied convention and prejudice to become one of the most celebrated Shakespearean performers of his century. While much has changed since Ira’s time, the conversation around diversity at the Oscars reminds us that actors of color still struggle to find ample opportunities to practice their art.

We interviewed author Glenda Armand about why she chose to write a book on Ira Aldridge and how far we’ve come when it comes to diversity in the arts. END_OF_DOCUMENT_TOKEN_TO_BE_REPLACED

In August we wrote to you about the death of Michael Brown in Ferguson, Missouri. Our publisher said then that the matter of representation was urgent; now, four months later, we see that urgency for what it is: a matter of life or death. Michael Brown’s name now sits alongside new names like Eric Garner, Tamir Rice, and Akai Gurley. How many more names will need to be added before things change?

END_OF_DOCUMENT_TOKEN_TO_BE_REPLACED

The following is a note from our Publisher, Jason Low, published in this month’s e-newsletter:

It’s been a hard few weeks for those of us following the news out of Ferguson, Missouri. While the exact details of Michael Brown’s death remain unknown, we can already see how this latest incident fits into a larger narrative in this country in which people of color are routinely discriminated against and subject to violence based on the color of their skin. Healing and change cannot begin until we as a country acknowledge the role racism plays not just in events like Michael Brown’s death, but in the everyday lived experiences of the 37% of America that is not white.

END_OF_DOCUMENT_TOKEN_TO_BE_REPLACED

Guest blogger Howey McAuley graduated with a BFA in Surface Design from East Carolina University. The best job she ever had was managing school book fairs for an independent bookstore. These days most of her artwork centers around crafts with her children. You can find her on Twitter at @23catsinaroom.

Several weeks ago my daughter Boogie (who just turned 5) had a Barbie doll eaten by one of our dogs. Normally this would lead to a meltdown of epic proportions. This time, however, she shrugged nonchalantly and said, “She’s just the Black one.” Keeping my voice calm (while internally freaking out) I asked her if that made the Barbie less important. She said yes. YES. What?

END_OF_DOCUMENT_TOKEN_TO_BE_REPLACED

A couple of years ago I wrote a post about being called a racial slur in my hometown. The post generated a lively discussion. As a follow-up, we decided to put together a flow chart that illustrates possible courses of action a person might take when an unfortunate incident like this occurs. While choosing to turn and walk away is always an option, those on the receiving end of racism are fully aware that these incidents are upsetting, and sometimes it makes sense to stand up for yourself and others.

You will notice after viewing the flowchart that one of the scenarios suggests you unleash a comeback that is so brilliant it literally freezes the provoker in his or her tracks. We left this scenario up to your imagination, but we thought it might be productive (and fun) to post our best comebacks in the comments section below. That way we can all benefit from one another’s collective wisdom.

END_OF_DOCUMENT_TOKEN_TO_BE_REPLACED

This past weekend some guy called me a gook. What was surprising is it happened right in my hometown. I have lived in my town for five years now and have never had any problems with racism. This came out of the blue and was totally unprovoked. I was on my way to pick up Indian takeout for my family’s dinner. 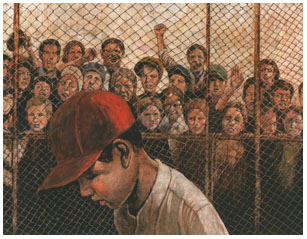 There were so many things out of the ordinary about this incident. The man who called me a gook was with his girlfriend and didn’t appear to be drunk. In the past, racist insults usually have come from groups of young men, late at night, after consuming 6+ beers each. It wasn’t late; it was around seven o’clock in the evening. And the part about the guy being with his girlfriend is significant because usually a person tries to conceal the less than desirable parts of his or her personality, like being racist, at least until after the third date.

END_OF_DOCUMENT_TOKEN_TO_BE_REPLACED

Who We Are
Requesting Review Copies
Lee & Low Books
END_OF_DOCUMENT_TOKEN_TO_BE_REPLACED