Allie Jane Bruce is Children’s Librarian at the Bank Street College of Education. She

began her career as a bookseller at Politics and Prose bookstore in Washington, DC, and earned her library degree from Pratt Institute. She tweets from @alliejanebruce and blogs for Bank Street College.

Part 1 | Part 2
In my first year as Children’s Librarian at Bank Street, I worked with two teachers on a project that allowed sixth-graders to explore implicit and explicit biases in publishing. Using book covers as a starting point for discussion, we engaged in conversations about identity, race, ethnicity, sexual orientation, gender, body image, class, and ability as they relate to books and beyond.

It started when my co-worker, Jamie Steinfeld, asked me to booktalk some realistic fiction for her sixth-grade Humanities class. A girl asked a question about Return To Sender—“Why is there a bird on the cover?”—and we were off. Good question! Yes, the hardcover does have a bird. And does anyone notice anything about the paperback? See how the boy has his face turned toward us, and we can see his blond hair, but the girl from Mexico has her back to us and we can’t tell what race she is? What’s up with that?

We talked. And talked. “It could be hurtful,” one kid said. Why? “Because they won’t put a dark-skinned person on the cover.” Why not? “Maybe they think it won’t sell as well.” Is that OK? “No!” We went ninety minutes over our allotted time (this is borderline psychotic when you work in a school), and immediately scheduled more meetings for the following weeks. We also enlisted the help of our school’s Diversity Director, Anshu Wahi. 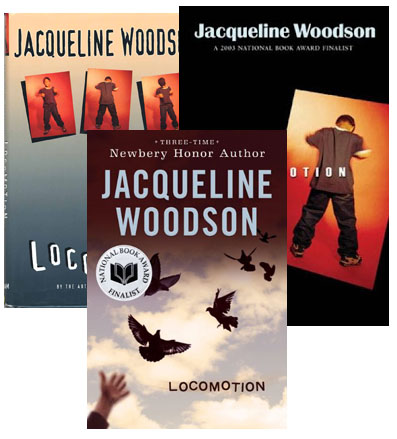 I put together two slideshows that highlighted some of my major concerns with covers (the first focused on race, the second gender). We talked more, and went over our available time again. I showed the students all the iterations of Locomotion by Jacqueline Woodson and we discussed how, on each cover, it’s difficult to tell that the main character is black. “Do illustrators think that if a person of color is fully shown, it won’t sell as many copies?” one frustrated kid later wrote.

Another student noticed that silhouettes can disguise a character’s race and features: “One thing I didn’t like about the cover [of Chains, by Laurie Halse Anderson] was how they didn’t show the features of the girl on the cover.” Another girl expanded: “I felt a little uncomfortable looking at the covers of Same Sun Here, Bird in a Box, and Chains. I wouldn’t go to extremes and say I was mad at the publishers, but I was definitely a little shocked when I first saw the books and then later realized that all of the characters in the books were people of color. I didn’t really understand why they thought it was okay to do that, like people wouldn’t notice. I mean, I guess you wouldn’t really notice unless you read the books, and by that time, you would have already bought the books.”

We talked about hair. Why do you so rarely see detailed, textured hair in illustrations of black characters? “They’re sending a message that black hair is not as nice to look at.” Kids of color and white kids seemed equally bothered and excited. One white kid wrote: “The cover of Locomotion caught my attention. . . . It just stuck with me. It just seemed so wrong.” 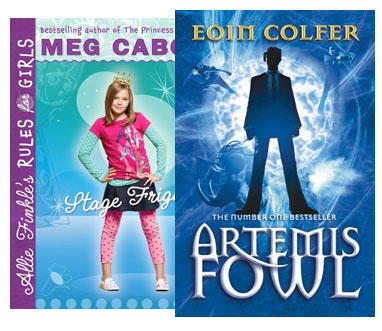 The conversation about gender in covers was just as rich. We talked about pretty white girls who are extremely put-together in outfits that clearly took a lot of thought (Fancy Nancy and Allie Finkle generated a fair amount of disgust). “It seems like the girls really care about how they look. . . . You don’t see clothes like that on covers with boys.” “Not all girls like to think about clothes and fashion!” “Yeah, and some boys DO!” We talked about covers that paint boys as adventurous and “in charge,” such as Artemis Fowl and Silverfin, and the pressure such images put on boys to be miniature James Bonds.

When it was time to talk body image, I brought out an old Hardy Boys book and together we examined the descriptions of Chet (the Hardys’ “stout chum”) and how those stereotypes are still prominent (the kids related them to current books, TV shows, and movies). One girl noted: “Obese people are rarely the heroes. They are either lazy or just act disadvantaged. People underestimate them.” By year’s end, we’d talked about LGTBQ issues, banning books, Native portrayals, how a book is made, and more.

The teachers who worked with me on this project observed the kids’ remarkable growth and development over the course of the project. Jamie Steinfeld, their Humanities teacher, says, “When it comes to paying attention to and talking about books and their subtle messages, the kids changed completely.” Diversity Director Anshu Wahi adds, “We didn’t spoon-feed them opinions, so they developed their own.”

Not content to limit the project to classroom discussions, we arranged a trip to Barnes and Noble in February. The experience proved to be a turning point in the project—and you can read all about it in Part 2.

20 thoughts on “Whitewashing Book Covers: What Do Kids Think? Part I”

Who We Are
Requesting Review Copies
Lee & Low Books
END_OF_DOCUMENT_TOKEN_TO_BE_REPLACED