Today, we’re launching a Kickstarter campaign to help bring this special book to even more readers, which will run for thirty days. And we’re excited that it’s already been designated one of Kickstarter’s Projects We Love! 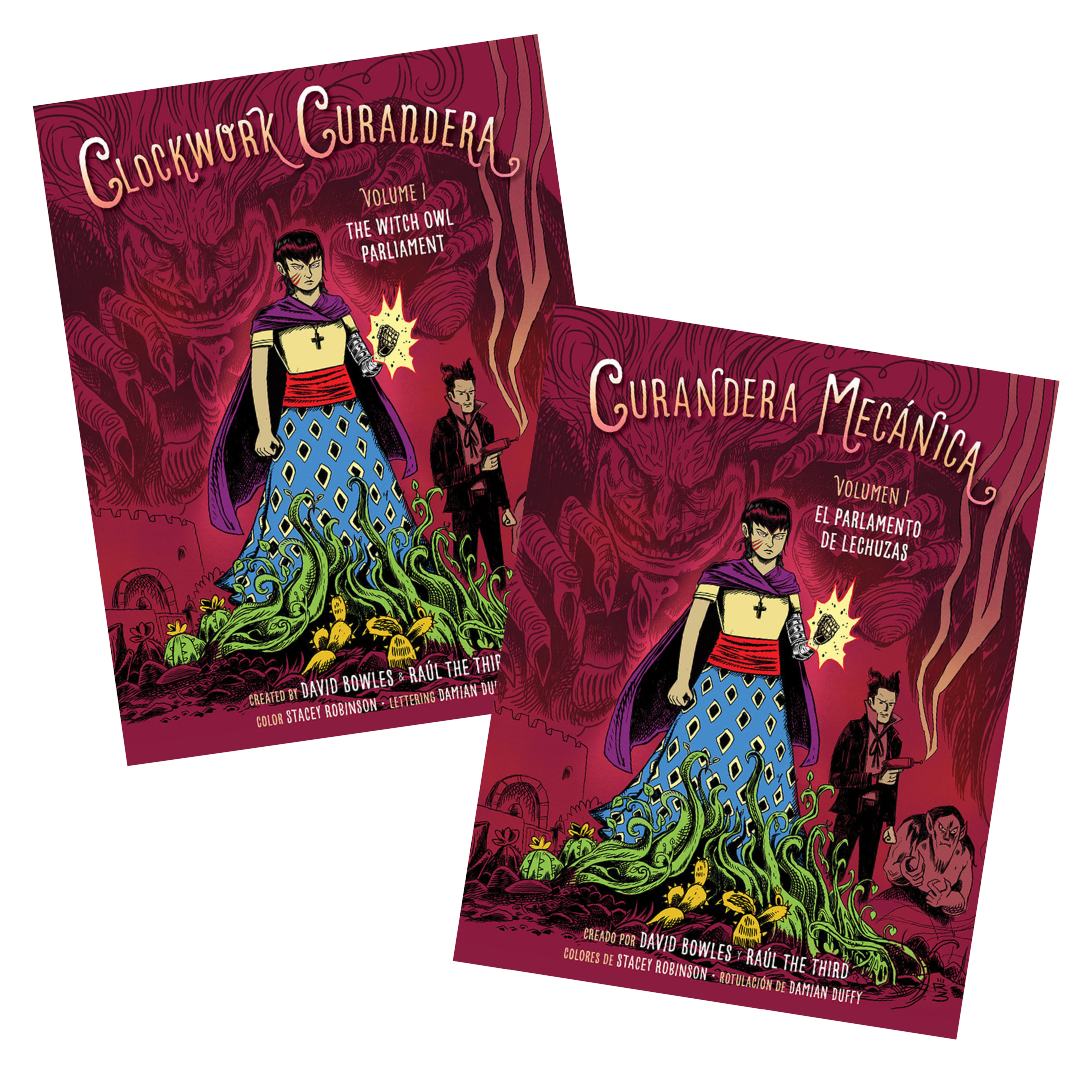 We believe strongly that this project is not only a gorgeous read, but also desperately needed—it offers a diverse twist on a classic; it centers Mexican and Indigenous peoples and lifeways; it’s by a talented Latinx team; it will be available in simultaneous English and Spanish editions. While we would be able to fund the printing of this book on our own, partnering with Kickstarter will allow us to greatly expand our reach, giving it the best possible shot at finding its audience. By partnering with readers on Kickstarter,  we can:

A successful Kickstarter run will also help us publish more diverse graphic novels by BIPOC creators in the future!

A diverse twist on Frankenstein…

In the Republic of Santander, non-Christian magic is frowned upon, if not outright prohibited. But when Cristina Franco, an apprentice shaman, is killed by witch owls, her brother Enrique cannot let her go. With forbidden alchemy and engineering, Enrique brings her back to life: part human, part machine. Though her very existence is an abomination to Santander’s citizens, Cristina vows to use her new abilities to protect her country from attack.

With help from a handsome skinwalker named Mateo, Cristina and Enrique track down the witch owl coven and uncover a sinister plot to bring Santander under the rule of the Witch Owl Parliament, whose legendary cruelty would dismantle the country’s hard-won freedoms. At the same time, Indigenous folks and immigrants are disappearing from Santander–including Enrique’s beloved, Gaspar. Could the attacks and the disappearances be related? As the witch owls attack more trains and more refugees go missing, the trio must uncover the witch owls’ origins to understand their weakness.

The Witch Owl Parliament is already fully completed and will be a 112-page paperback. The art will be full color limited palette, with both red and green and a 4-color paper background. And it will be available simultaneously in both English and Spanish editions—author David Bowles is a professional translator, and did the translation himself! Here’s a peek at some of the artwork:

David Bowles (creator, translator) is a Mexican American author from south Texas, where he teaches at the University of Texas Río Grande Valley. He has written several award-winning titles, most notably The Smoking Mirror and They Call Me Güero. His work has also been published in multiple anthologies, plus venues such as The New York Times and Strange Horizons. He is also one of the activists behind Dignidad Literaria, a grassroots campaign for greater Latinx inclusion in the U.S. publishing industry. In 2017, David was inducted into the Texas Institute of Letters. He is online at  and on Twitter.

Raúl the Third (creator) is the two-time Pura Belpré award-winning author/illustrator of Lowriders to the Center of the Earth and Vamos! Let’s Go to the Market. His work centers the contemporary Mexican American experience and his memories of growing up in El Paso, Texas, and Ciudad Juarez, Mexico. Find him online and on Instagram.

Stacey Robinson (colorist) is an assistant professor of graphic design at the University of Illinois and an Arthur Schomburg Fellow with an MFA from the University at Buffalo. His graphic novels include I Am Alfonso Jones, named one of the Ten Best Graphic Novels of 2017 by Forbes. As part of the team “Black Kirby,” he works with fellow artist John Jennings to create graphic novels, gallery exhibitions, and lectures that deconstruct the work of comic book legend Jack Kirby into re-imagined Black resistance spaces inspired by hip-hop, religion, the arts, and sciences. Robinson lives in Illinois and can be found on Twitter and Instagram.

Purchase your copy of Clockwork Curandera Volume 1: The Witch Owl Parliament through Kickstarter.

Spread the Word! Share this link with graphic novel fans you know!

Who We Are
Requesting Review Copies
Lee & Low Books
END_OF_DOCUMENT_TOKEN_TO_BE_REPLACED