Six years ago, we released Summer of the Mariposas from our Tu Books imprint. Set in Texas, Summer of the Mariposas is a Mexican retelling of the Odyssey, but it’s also a celebration of sisterhood and maternal love. It went on to win numerous awards, including the Andre Norton Award for Young Adult Science Fiction and Fantasy Finalist, Lone Star Reading List, and the Amelia Bloomer Project – Feminist Task Force.

Now, we’re excited to say that this beautiful story has been translated into Spanish! We’re releasing El verano de las mariposas this May, and it will be our first young adult novel to be translated into Spanish. We interviewed author Guadalupe García McCall and translator David Bowles on the translation process, what it was like working together, and their upcoming projects. 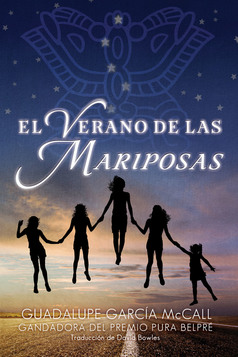 El verano de las mariposas is our first young adult title that has been translated into Spanish. David, what was the translation process like? Did you go page by page?

David Bowles: I’m such a huge fan of the book, which I actually teach as part of a college course on children’s and adolescent literature. Since I’ve read it so many times, I first talked to Guadalupe about some global issues (more below). Then, yes, it was pretty much a matter of translating a page at a time. I kept two windows open on my screen: a PDF of the English original and a Word document into which I typed the Spanish translation as I re-read the book.

Within the Spanish language, there are several different dialects. David, did you and Guadalupe talk about certain phrases or words that are specific to Mexico?

DB: Before I even began translating, Guadalupe and I talked extensively about the voice she wanted for Odilia. The trick was to capture the rhythms and nuances of Border Spanish (as spoken in Eagle Pass/Piedras Negras) while also retaining the literary flair of the English original. Odilia is a well-read young woman, and her English sparkles with poetry as well as adolescent angst. That was the balance I had to strike with the translation. Now, as a Mexican-American from the border, I’ve been bilingual all my life, and both Guadalupe and I are conversant in the Standard Spanish of Mexico as well. But the Texas-Mexico border is quite long, you may have noticed, and where I’m from, we use some terms differently from Guadalupe’s bend of the river. So the revision and editing process became a fine-tuning of Odilia and her sisters’ voices, making sure that the words I put in their mouths would naturally be there. It was a delightful if delicate process, complicated and enriched by the work of our copy-editor.

Guadalupe García McCall: David and I had a lot of conversations regarding word choice. One of them came when he had to decide what to call the “girls” in the book. Odilia just calls them girls, but we have several words for that. The top contenders were “niñas” and “muchachas” both of which could apply. However, “niñas” is too young, more like “tweens,” but the girls range in age between 10-15, so had to go with “muchachas” because that is more like “teens” and, except for Pita, the term fits most of the girls’ personalities (if not age range). There were other funny moments when David would ask me about specific words that I considered too “street-smart” for the girls, who are, in my opinion, naïve to the ways of the world. Their odyssey into Mexico and the past changes that, and although their delicate, sensitive way of looking at the world changes, they never truly become hardened. If anything, they are “refined” by their quest. David was very sensitive about that. He would send me little messages on FB asking advice about specific words and phrases. What was one of the biggest challenges with translating El verano de las mariposas? Were there any passages that were particularly hard to translate?

DB: Other than finding the right voice for Odilia, the toughest part was translating jokes that involved wordplay (and there are many). I was constantly popping onto social media to message Guadalupe with questions and ideas. She’s a great collaborator, and luckily doesn’t appear to sleep, so she was usually available! Along these lines, we also had to find amusing equivalents for the twins’ quasi-vulgarities, where they’ll almost say a bad word before shifting into some idiosyncratic silliness. I think we made some good choices. At the very least, they cracked me up!

GGM: I want to add here that I think David’s rendition of Summer of the Mariposas is quite lovely. I have to applaud him for always checking in with me on the nuances of the language and my writer’s purpose and intent as he translated. He did a fantastic job of capturing the beauty of the landscape and the layers of meaning in the text. As I was looking it over, before it went back to Stacy Whitman, I kept reading it out loud and sobbing. It is momentous to hear my work translated into the language of my heart.

Guadalupe, do you plan on having any of your other books translated into Spanish as well?

GGM: I would love to have all of my books translated into Spanish. David and I have talked about having him translate Shame the Stars and [the forthcoming] All the Stars Denied someday. However, I think I want to attempt to translate Under the Mesquite myself. There is something about translating poetry that really appeals to me, and I want to see if I can capture the rhythms of Lupita’s voice in Spanish. Maybe, if I do it justice, Lee & Low can put it out for the 10th anniversary edition in 2021.

What new projects are coming up for both of you?

DB: I’ve got a book on Mexican mythology and a collection of middle-grade poetry coming out this year. I’m also super stoked that next year Tu Books will be publishing the YA graphic novel I’ve been working on with Raúl “the Third” González: Clockwork Curandera. Featuring an awesome Latina protagonist, it’s a riff on the Frankenstein story, set in an alternate 19th-century Mexico where Mesoamerican magic and steampunk tech exist side-by-side.

GGM: Well, I actually took on the task that everyone I know has been wanting me to attempt for years. I wrote a picture book. It’s out on submission right now with my agent, Jill Corcoran, so we’ll see what happens. I think this year has been all about growing for me. My first short story to ever be published, “Rancho Nido,” is coming out next month—a Kaiju origin story I wrote for Kaiju Rising, Age of Monsters II. I’m very excited about it. I have Alana Joli Abbott to thank for that. She asked me to write it for her, and I took it on because it was something that wasn’t in my radar, and, well, I love a good challenge. Attempting a Kaiju story actually spawned a YA work-in-progress I’m labelling my “Borderlands Kaiju Novel.” Although, I have no idea if it’s any good. I’ll find out as I continue working on it. Lately, though, I’ve been experimenting with a creative non-fiction writing piece based on the Texas flood of 1954. But that’s a super sensitive and personal project. I’m taking it slow, see where it leads me.

What would you say to someone who claims that we don’t need books in Spanish? DB: They are wrong on so many levels. Spanish is a beautiful, deeply lyrical language. Some of the greatest masterpieces in world literature were penned in that tongue. Given the number of Latinx readers in the US, especially Mexican American young people, it makes sense to have translations of popular, culturally relevant titles. For lots of US students, English is their second language, and having great books available in Spanish supports their education and success. Finally, many communities are recognizing the value of dual language education, so publishers do well to have offerings in multiple versions.

GGM: I think it’s so important to talk about this. We need books in Spanish because we have a lot of Latino parents in our country who want to read the books their children are reading in school, but the language is intimidating. Some speak it but don’t necessarily read it. Others, like my own parents, are monolingual. They would love nothing more than to have a copy of the books their children love in Spanish. I’ve visited schools where I’ve talked to parents who want to share Under the Mesquite with their own parents (the student’s grandparents), but they can’t, and that breaks my heart. Nobody should be deprived of reading a good book because they aren’t fluent in English.

Guadalupe Garcia McCall was born in Mexico and moved to Texas as a young girl, keeping close ties with family on both sides of the border. Trained in Theater Arts and English, she now teaches English/Language Arts at a junior high school. McCall lives with her husband and their three sons in the San Antonio, Texas, area. You can find her online at guadalupegarciamccall.com.

David Bowles is a product of a Mexican-American family, and has lived most of his life in deep South Texas, where he teaches at the University of Texas Río Grande Valley. Recipient of awards from the American Library Association, Texas Institute of Letters and Texas Associated Press, he has written several books, most significantly the Pura Belpré Honor Book The Smoking Mirror.

One thought on “Interview: David Bowles + Guadalupe García McCall on Translating a Novel Into Spanish”

Who We Are
Requesting Review Copies
Lee & Low Books
END_OF_DOCUMENT_TOKEN_TO_BE_REPLACED