Other books illustrated by the Charlotte, NC, artist include David Adler’s Campy: The Story of Roy Campanella and several titles in the Scraps of Time series by Newbery Honor author Patricia McKissack. He also has illustrated greeting cards for Hallmark, among other projects.

Peoples-Riley is the author and illustrator of This Is It, a picture book celebrating individuality, self-expression and dance, inspired by her daughter. The Las Vegas artist has planned a companion book for  release in 2019. She also is the illustrator of the forthcoming What Gloria Heard, a picture book biography about the life and work of Gloria Steinem, by Jessica Rinker. 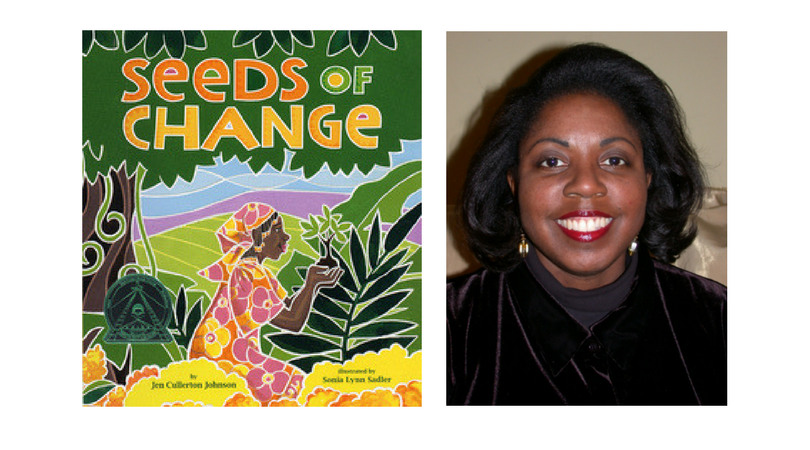 Sonia Lynn Sadler was the illustrator of Seeds of Change (2011), a seminal work promoting environmental stewardship for children. While she died of cancer in 2013, her work continues to inspire many illustrators to explore diversity, social justice and the environment.

The award is given annually in Sonia Lynn Sadler’s honor to illustrators of diverse backgrounds who are starting out in children’s books and addresses social justice themes in ways that engage young audiences. It was initiated by Seeds of Change author Jen Cullerton Johnson, who invited Salisbury University to work with her to launch it.

Sadler’s parents, Wellington and Inez Sadler, presented the awards to James and Peoples-Riley.

For more information about the Sonia Lynn Sadler Award or to nominate a children’s book illustration, go to www.SLSAward.com or contact Jen Cullerton Johnson at www.jencullertonjohnson.com.

Who We Are
Requesting Review Copies
Lee & Low Books
END_OF_DOCUMENT_TOKEN_TO_BE_REPLACED