Summer is here in full force. It’s the perfect time to curl up pool- or beachside with a good book! Look no further than our new spring and fall releases!

When Reyna accidentally breaks her abuelito’s old vihuela, she travels around her neighborhood trying to figure out how to repair it. In the process, she discovers her grandfather’s legacy. Written by Jennifer Torres and illustrated by Renato Alarcão. 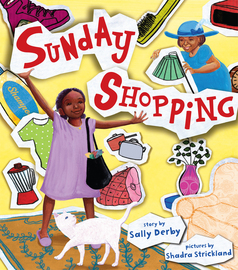 Evie and her grandma go shopping every Sunday. They put on their nightgowns, open up the newspapers,  and turn on their imaginations. Written by Sally Derby and illustrated by Shadra Strickland.

Poems In The Attic A young girl finds her mother’s poems written when her mother traveled around in a military family. The young girl writes her own related poems. Written by Nikki Grimes and illustrated by Elizabeth Zunon.

Ira Aldridge dreamed of acting in Shakespeare’s plays. Because of a lack of opportunity in the United States, Ira journeys to England to pursue his dream of becoming an actor. Written by Glenda Armand and illustrated by Floyd Cooper.

Maya has a blanket stitched by her Grandma. The blanket later becomes a dress, a skirt, a shawl, a skirt and a headband. This story is inspired by the Yiddish folk song “Hob Ikh Mir a Mantl” (“I Had a Little Coat”). Written by Monica Brown and illustrated by David Diaz.

New from the Tu Books imprint:

Claire Takata discovers her deceased father’s connection to the yakuza, the Japanese mafia, and puts her and her family’s lives in danger. Written by Valynne E. Maetani.

Trail of the Dead

In this sequel to the award-winning Killer of Enemies, Lozen and her family, on the run from the tyrants who once held them hostage, embark on a journey along a perilous trail once followed by her ancestors, where they meet friends and foes alike. Written by Joseph Bruchac.

Who We Are
Requesting Review Copies
Lee & Low Books
END_OF_DOCUMENT_TOKEN_TO_BE_REPLACED