We’re getting close to the release of Awakening, the upcoming sequel to the YA science fiction dystopia Tankborn from our Tu Books imprint! Awakening continues the story of Kayla and Mishalla, two teen GENs (genetically engineered nonhumans) fighting for freedom and equality: 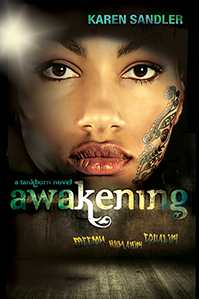 Last week, we were lucky to get some help revealing the cover of Awakening from some great book blogs:

A Reader of Fictions 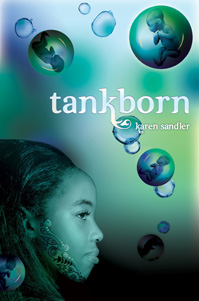 But let’s start from the beginning. First, talking about Awakening will require a few Tankborn spoilers, so those who are spoiler-averse: beware!

As you can see from the early proposed concepts, we had a few possibilities to choose from:

But which one best represented the book? To make a decision, we had to dig into the essence of Awakening.

In Tankborn, Kayla was recruited by a group of trueborns and lowborns quietly working against GEN oppression. In Awakening, Kayla starts to chafe at the slightly more gentle bonds this organization puts upon her—she wants to control her own destiny. But while she works towards freedom (and a chance at love with Devak, a trueborn), a deadly disease is spreading among GENs–which is especially curious considering that GENs are people who are genetically engineered not to get sick. On her travels for the Kinship–while also avoiding bombs set in GEN housing and warehouses by a mysterious group that only identifies themselves with the grafitti “F.H.E.”–Kayla meets a couple other GEN girls who are connected to this disease, one of whom is rumored to be able to heal whomever she touches.

Some early concepts, like the ones above, included one piece of Awakening or another, but a couple looked too modern-day urban or romance genre (didn’t quite set themselves apart as futuristic science fiction); another didn’t get the full message of the book across in a way I felt the other concepts did; another felt like it was actually better held back for the cover of Revolution, the third book in this trilogy (so now you have a hint as to what book 3 may look like!).

In combining the concepts, the designer, Einav Aviram, did a great job of showing what this book is all about in one great cover: the grafitti (Freedom, Humanity, Equality), the mysterious GEN girl who can heal whoever she touches, the dawning of Kayla’s stand for her rights–all coming together.

I should also say, of course, that we were happy for another chance to put a person of color on a cover. Whitewashing of YA covers is still, unfortunately, a common occurrence, and one of the things we try to do at Tu Books is showcase our characters of color on the cover whenever possible, whenever the design allows it.

So there you go, dear readers. What do you think?

Design 101: How a Book Cover Gets Made, Part II

3 thoughts on “Cover Design 101: The cover of Awakening”

Who We Are
Requesting Review Copies
Lee & Low Books
END_OF_DOCUMENT_TOKEN_TO_BE_REPLACED