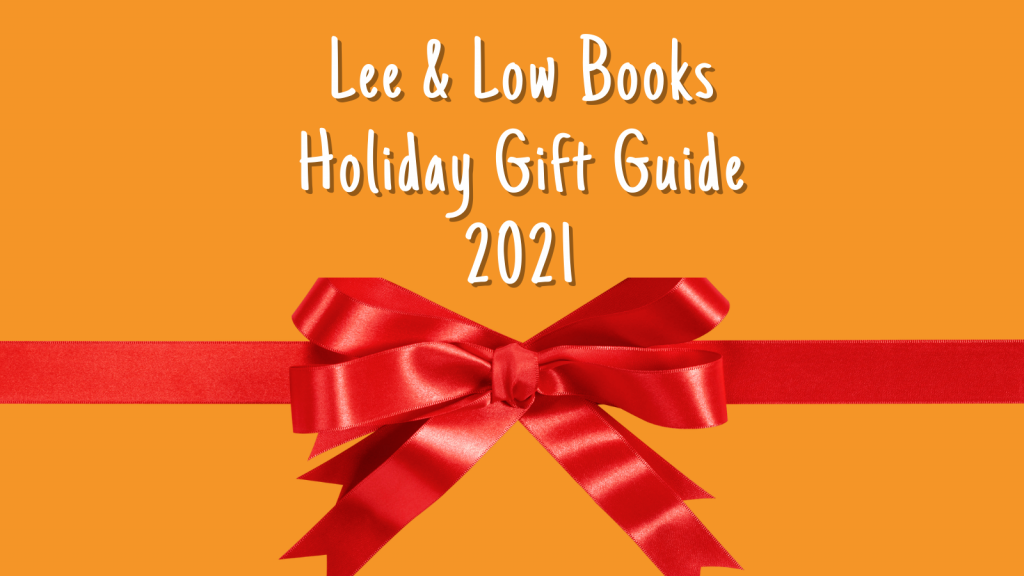 We’re so excited to present our holiday gift guide for this year! If you are in the position to give gifts this year, this list has everything you could possibly be looking for. 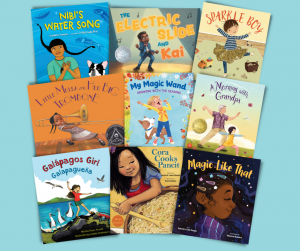 Nibi’s Water Song by Sunshine Tenasco, illus. by Chief Lady Bird: This bright and vivacious book from two Indigenous creators celebrates the energy, moxie, and determination of water activists of all ages.

The Electric Slide and Kai by Kelly J. Baptist, illus. by Darnell Johnson: Kai is the only member of his family who can’t get the dance steps to the Electric Slide right. But Kai is determined to bust a move in this fun and sweet celebration of African American families.

Sparkle Boy by Lesléa Newman, illus. by Maria Mola: Young Casey loves sparkly things, just like his older sister, who does not approve until an encounter with teasing bullies helps her learn to accept and respect Casey for who he is.

Little Melba and Her Big Trombone by Katheryn Russell-Brown, illus. by Frank Morrison: A biography of African American jazz virtuoso Melba Doretta Liston, a pioneering twentieth-century trombone player, composer, and music arranger at a time when few women, of any race, played brass instruments and were part of the jazz scene.

My Magic Wand: Growing with the Seasons by Pat Mora, illus. by Amber Alvarez: From bestselling Latina author Pat Mora comes a collection of poems celebrating a young child’s growth and everyday experiences throughout the seasons of a year.

A Morning with Grandpa by Sylvia Liu, illus. by Christina Forshay: In this sweet, slice-of-life story, a curious and active Asian American girl spends the day learning tai chi from her grandfather, and in turn tries to teach him how to do yoga.

Galápagos Girl/Galapagueña by Diane Arnold, illus. by Angela Dominguez: This charming picture book from the illustrator of Mango, Abuela, and Me introduces the fascinating creatures of the Galápagos Islands through the life of one very lucky girl.

Cora Cooks Pancit by Dorina K. Lazo Gilmore, illus. by Kristi Valiant: Cora and Mama work together to cook up pancit for the family in this celebration of Filipino heritage and foods.

Magic Like That by Samara Cole Doyon, illus. by Geneva Bowers: In this celebration of Black Girl Magic, a young girl finds confidence and excitement in the versatility of her natural hair and the way her different hairstyles reflect the natural world. 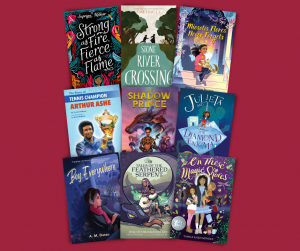 Strong as Fire, Fierce as Flame by Supriya Kelkar: In 1857 India, thirteen-year-old Meera escapes a life she has no say in–and certain death on her husband’s funeral pyre–only to end up a servant to a British general in the East India Company. When a rebellion against British colonizers spreads, she must choose between relative safety in a British household or standing up for herself and her people.

Stone River Crossing by Tim Tingle: From the award-winning author of How I Became a Ghost, a tale of unlikely friendship and miracles. When Martha Tom helps Lil Mo and his family escape from the plantation across the river, it’s just the beginning of a Choctaw adventure of a lifetime.

Miosotis Flores Never Forgets by Hilda Eunice Burgos: Perfect for fans of Meg Medina and Barbara O’Connor, this heartfelt novel about family, pets, and other things we hold close is one that you’ll never forget.

The Story of Tennis Champion Arthur Ashe by Crystal Hubbard, illus. by Kevin Belford: The “Story of” chapter-book line debuted with this action-packed tribute to Arthur Ashe, one of the most compelling athletes and humanitarians of the twentieth century.

The Shadow Prince by David Anthony Durham: In this middle grade solarpunk novel set in an alternate Egyptian universe, twelve-year-old Ash must compete and survive to become the shadow–and protector–of the prince.

Julieta and the Diamond Enigma by Luisana Duarte Armendáriz: From the Mixed-Up Files of Mrs. Basil E. Frankweiler meets Merci Suarez in this smart young middle-grade mystery about a diamond gone missing from the Louvre and the sweet and spunky girl who cracks the case.

Boy, Everywhere by A.M. Dassu: What turns citizens into refugees and then immigrants? In this powerful middle-grade debut, Sami and his family embark on a harrowing journey to save themselves from the Syrian civil war.

Rise of the Halfling King (Tales of the Feathered Serpent #1) by David Bowles, illus. by Charlene Bowles: A middle grade graphic novel follows the adventures of a magical boy from Maya mythology. The first of a series based on ancient Mesoamerican myths and legends.

On These Magic Shores by Yamile Saied Méndez: Minerva must take care of her sisters after her mother’s disappearance in this magical middle grade story that pairs perfectly with Peter Pan. 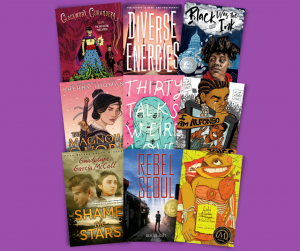 The Witch Owl Parliament (Clockwork Curandera Vol. I) created by David Bowles & Raúl the Third, coloring by Stacey Robinson and lettering by Damian Duffy: Discover a graphic novel unlike any other–a brilliant steampunk reimagining of Frankenstein set in colonial Mexico.

Black Was the Ink by Michelle Coles: Through the help of a ghostly ancestor, sixteen-year-old Malcolm is sent on a journey through Reconstruction-era America to find his place in modern-day Black progress.

Thirty Talks Weird Love by Alessandra Narváez Varela: A thirteen-year-old girl growing up in Mexico is visited by her thirty-year-old future self in this powerful YA novel in verse about handling depression.

I Am Alfonso Jones by Tony Medina, with illustrations by Stacey Robinson & John Jennings: An unflinching graphic novel about the afterlife of a young man killed by an off-duty police officer, co-illustrated by New York Times bestselling artist John Jennings.

Shame the Stars by Guadalupe García McCall: In the midst of racial conflict and at the edges of a war at the Texas-Mexico border in 1915, Joaquín and Dulceña attempt to maintain a secret romance in this young adult reimagining of Romeo and Juliet.

Gabi, A Girl in Pieces by Isabel Quintero: Gabi’s life is a mess–her family, her friends, her attempts at a love life–but writing helps, especially since it turns out she’s pretty good at poetry.

We’re so thankful for your support and look forward to bringing you even more diverse books about everyone, for everyone in 2022!

Who We Are
Requesting Review Copies
Lee & Low Books
END_OF_DOCUMENT_TOKEN_TO_BE_REPLACED