Today we are celebrating the release of two heart-stopping young adult titles—Black Was the Ink written by Michelle Coles with illustrations by Justin Johnson and Thirty Talks Weird Love by Alessandra Narváez Varela!

Black Was the Ink

A story of history, heroism, and home, Black Was the Ink by Michelle Coles is the perfect twist on a coming-of-age story that also tells the essential history of Black Americans and the Civil Rights Movement. 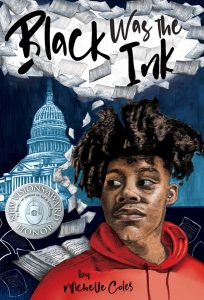 Praise for Black Was the Ink:

“A dynamic look at how the past informs the future.” —Kirkus Reviews

“A clear-eyed novel of youthful challenges and precariousness buoyed by ancestral spirits and a history fraught with struggle and purpose.” —Tony Medina, author of I Am Alfonso Jones

Order your copy of Black Was the Ink:

Check our tips on teaching United States Reconstruction with Black Was the Ink.

Michelle Coles is an accomplished civil rights attorney and a proud alumna of the University of Virginia and Howard University School of Law. As a ninth-generation Louisianan, she is highly attuned to the struggles African Americans have faced in overcoming the legacy of slavery and the periods of government-sanctioned discrimination that followed. She hopes that by revealing oft-hidden Black history, her debut novel will empower young people with tools to shape their destiny. Find her on the web at michellecoles.com.

Justin Johnson credits his mother and grandmother, both teachers, with inspiring his love of picture books and storytelling. He studied children’s book illustration as well as animation at the Rhode Island School of Design, and now works as an illustrator, GIF animator, and aspiring art teacher. Justin lives in Washington, D.C. Find him on the web at justinjohnson.work or on Instagram as @the.k.in.cmyk.

Told in verse and written with sincerity, Thirty Talks Weird Love succeeds in its ability to provide hope even through times of hardship. It’s a coming-of-age story that masterfully explores mental health and gives YA (and older) readers something to relate to no matter their life experiences. 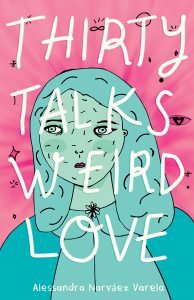 Out of nowhere, a lady comes up to Anamaria and says she’s her, from the future. But Anamaria’s thirteen, she knows better than to talk to a stranger. Girls need to be careful, especially in Ciudad Juárez, Mexico–it’s the 90’s and fear is overtaking her beloved city as cases of kidnapped girls and women become alarmingly common. This thirty-year-old “future” lady doesn’t seem to be dangerous but she won’t stop bothering her, switching between cheesy Hallmark advice about being kind to yourself, and some mysterious talk about saving a girl.

Anamaria definitely doesn’t need any saving, she’s doing just fine. She works hard at her strict, grade-obsessed middle school–so hard that she hardly gets any sleep; so hard that the stress makes her snap not just at mean girls but even her own (few) friends; so hard that when she does sleep she dreams about dying–but she just wants to do the best she can so she can grow up to be successful. Maybe Thirty’s right, maybe she’s not supposed to be so exhausted with her life, but how can she ask for help when her city is mourning the much bigger tragedy of its stolen girls?

This thought-provoking, moving verse novel will lead adult and young adult readers alike to vital discussions on important topics–like dealing with depression and how to recognize this in yourself and others–through the accessible voice of a thirteen-year-old girl.

★ “Fans of The House on Mango Street and The House of the Spirits will be riveted.” —Booklist, starred review

★ “A must for every library given its timely themes, international setting, and authentic protagonist voice.” —School Library Journal, starred review

“Much like plumbing the contents of a poet’s composition notebook, this layered story rewards multiple reads.” —Publishers Weekly

“A gritty and absorbing tale of learning to love oneself and one’s roots, warts and all.” —Kirkus Reviews

“In bold and gorgeous verse, Varela crafts a deeply moving and evocative story that grapples unflinchingly with issues of mental health. This is a book our young people need.” —Jasmine Warga, Newbery Honor-winning author of Other Words For Home

Alessandra Narváez Varela was born and raised in Ciudad Juárez, México. She earned a B.S. in Biology and a Bilingual M.F.A. in Creative Writing from the University of Texas at El Paso, where she now teaches. Thirty Talks Weird Love is her debut novel. She lives in El Paso, Texas. Visit her website at alessandranarvaezvarela.com.

Who We Are
Requesting Review Copies
Lee & Low Books
END_OF_DOCUMENT_TOKEN_TO_BE_REPLACED