New York, NY (June 28, 2021)—In major news for independent publishing, diversity-focused publisher Lee & Low Books has acquired the assets of El Paso-based Cinco Puntos Press. The acquisition brings together the lists of two award-winning independent publishers who are deeply respected for their commitment to a wide range of voices, and adds more than 130 titles to Lee & Low’s list. Lee & Low Books will become the publisher and primary distributor of all Cinco Puntos Press titles, which previously were distributed by Consortium.

Founded in 1985 by husband-and-wife team Bobby and Lee Byrd, Cinco Puntos Press began with a focus on local stories and voices. “When we first started, we looked to our friends and our neighborhood, El Paso and the U.S./Mexico Border,” says Bobby Byrd. Over time, he says, “our neighborhood expanded to include the cultural diversity of all human experience, but our books always have the picante taste of the border, its politics and rasquache ways.”

Over the course of its 36 years, Cinco Puntos Press published close to 130 books and received many awards and accolades, including the American Book Award for Excellence in Publishing, several publishing grants from the National Endowment for the Arts, and an induction into the Latino Literary Hall of Fame. Their list includes many beloved and award-winning titles, from Joe Hayes’s classic bilingual storybook La Llorona/The Weeping Woman, to PEN/Faulkner Award winner Everything Begins and Ends at the Kentucky Club by Benjamin Alire Sáenz, to Morris Award winner Gabi, a Girl in Pieces by Isabel Quintero.

The acquisition marks a new stage of growth for Lee & Low Books, which this year celebrates its 30th anniversary. Founded in 1991,  the company publishes diverse children’s books that are “about everyone, for everyone”–the company motto. Lee & Low Books is the largest multicultural children’s book publisher in the country, as well as one of the very few publishing companies in the United States owned by people of color. With the acquisition of Cinco Puntos Press, Lee & Low Books will expand its list to include its first adult titles, as well as significantly enlarging its collection of bilingual, Chicanx, and border literature. 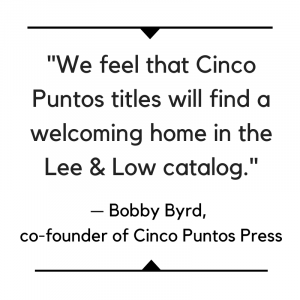 Lee & Low plans to maintain Cinco Puntos Press titles under their own imprint, with the possibility of acquiring new titles under the imprint that align with Cinco Puntos’s mission and aesthetic. In addition, Lee & Low will become the publisher of several forthcoming Cinco Puntos Press titles, including Thirty Talks Weird Love by Alessandra Narváez Varela, which received a starred review from Booklist and will be released in October 2021; Where Wonder Grows, the follow-up picture book to the award-winning All Around Us by Xelena González and illustrated by Adriana M. Garcia, which received starred reviews from Kirkus Reviews and Publishers Weekly and will be published in January 2022 in both English and Spanish editions; and the adult literary thriller Nobody’s Pilgrims by award-winning author Sergio Troncoso, which will be published in May 2022.

Lee & Low also plans to reissue many Cinco Puntos Press books that are currently out of print, reflecting the company’s ongoing commitment to keeping diverse books in print for new generations of readers. “It is critical that a collection of strong diverse books like the ones that Cinco Puntos Press has published remain in print, and that is why these books were so important to us,” said Jason Low, publisher and co-owner of Lee & Low Books. Lee & Low Books previously acquired diverse children’s book publisher Children’s Book Press (CBP) in 2012 and Asia-focused publisher Shen’s Books in 2013, and has since brought nearly all of their titles back into print.

“We feel that Cinco Puntos titles will find a welcoming home in the Lee & Low catalog,” says Bobby Byrd. “For a long time now, we’ve admired how Lee & Low have developed a business model that competes in this changing environment, while maintaining their commitments to diversity and good books. We applaud their work and are delighted that the Cinco Puntos legacy will continue as a Lee & Low imprint.” 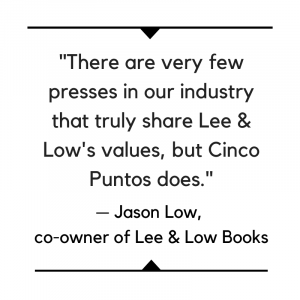 Jason Low agrees. “We have always held the books that Cinco Puntos Press published in high regard. There are very few presses in our industry that truly share Lee & Low’s values, but Cinco Puntos does. The books that Lee and Bobby Byrd have chosen to publish amplify marginalized voices and reflect the ideal of a truly inclusive publishing industry.”

Upon learning the news, many Cinco Puntos Press authors were delighted that their titles had found a second home with a company that shared their values. “Lee & Low has been amplifying unheard voices long before it became the trendy thing to do in publishing,” said Xelena González, author of the picture books All Around Us and the upcoming Where Wonder Grows. “We could not have hoped for a better home for our new book.”

Cynthia Weill, the Director of the Center for Children’s Literature at the Bank Street College of Education and author of several Cinco Puntos Press board books, called Lee & Low a “kindred spirit” of Cinco Puntos Press. “As part of my job, I read hundreds of books every year.  So many of my favorites come from Lee & Low’s lists, many which are industry firsts in terms of perspective and content. I could not be happier with where Cinco Puntos has landed.”

ABOUT LEE & LOW BOOKS: Established in 1991, Lee & Low Books is the largest children’s book publisher in the United States specializing in diversity and has been a leader in the movement for diversity in children’s publishing for 30 years. Visit leeandlow.com to learn more.

ABOUT CINCO PUNTOS PRESS: Lee and Bobby Byrd founded Cinco Puntos Press out of their home in the Five Points neighborhood of El Paso, TX. Earning early recognition for being pioneers in publishing bilingual books for children, it’s now grown to become nationally renowned for championing diversity in their award-winning children’s, YA, and adult books. Cinco Puntos itself has received numerous awards over the years, including the prestigious Lannan Fellowship for Cultural Freedom for Lee and Bobby Byrd’s courage and excellence in publishing.

Who We Are
Requesting Review Copies
Lee & Low Books
END_OF_DOCUMENT_TOKEN_TO_BE_REPLACED