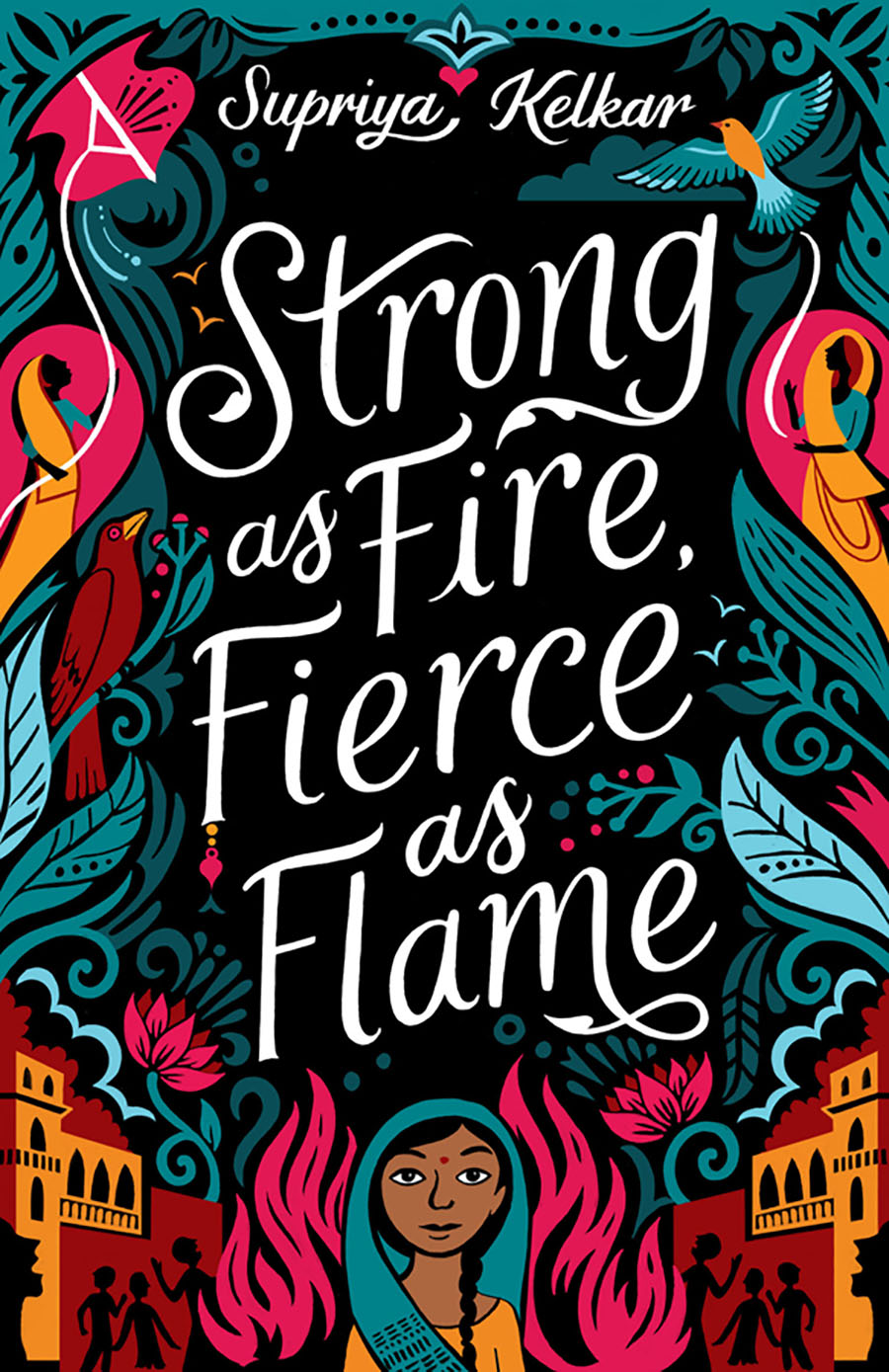 In this guest blog post, author Supriya Kelkar writes about the story behind her latest middle grade novel Strong as Fire, Fierce as Flame as well as the need to have conversations surrounding the atrocities committed in the name of colonialism and whose story is routinely told and whose story is left out.

I remember one day in third grade, our teacher read us a bit of The Secret Garden. I sat up a little taller, recognizing Indian characters, finally in a book! But I quickly realized they weren’t though of as equals by colonizers in their land. They were thought of as less than, just there to serve the white characters the story was centering. Just there to be part of the background in their own land.

The story was Mary’s even when it took place in India. Indians were described as “not people” but “servants who must salaam you.” I was overcome with a feeling of embarrassment and deep shame. Books like The Secret Garden and work by Rudyard Kipling, like The Jungle Book, are just a few examples of how racist many “classics” from this time period can be. Native people are viewed through a colonial gaze. Their lands serve as exotic, thrilling backdrops to stories, but their people are rarely even treated like people. Their stories are in the background, unseen, forgotten, not important enough to be told on the page, while the colonizers’ stories are prioritized.

When the inherent racism in these stories is pointed out, the idea is sometimes met with pushback. Excuses are made, saying it doesn’t matter if someone finds something racist in these stories, because these books were written a long time ago, and that’s just the way people thought back then. But that isn’t the way everyone thought back then. That excuse is once again only thinking about the people colonizing, not the people whose lives were forever changed from being colonized.

I was inspired, in part, to write Strong as Fire, Fierce as Flame to challenge these notions. I wanted to tell the stories that weren’t considered important, because they are important, and they shouldn’t be hidden or overlooked. I peppered this book with several real-life incidents I found in my research to paint a more accurate portrait of what was going on in lands and nations where colonial powers had taken over. 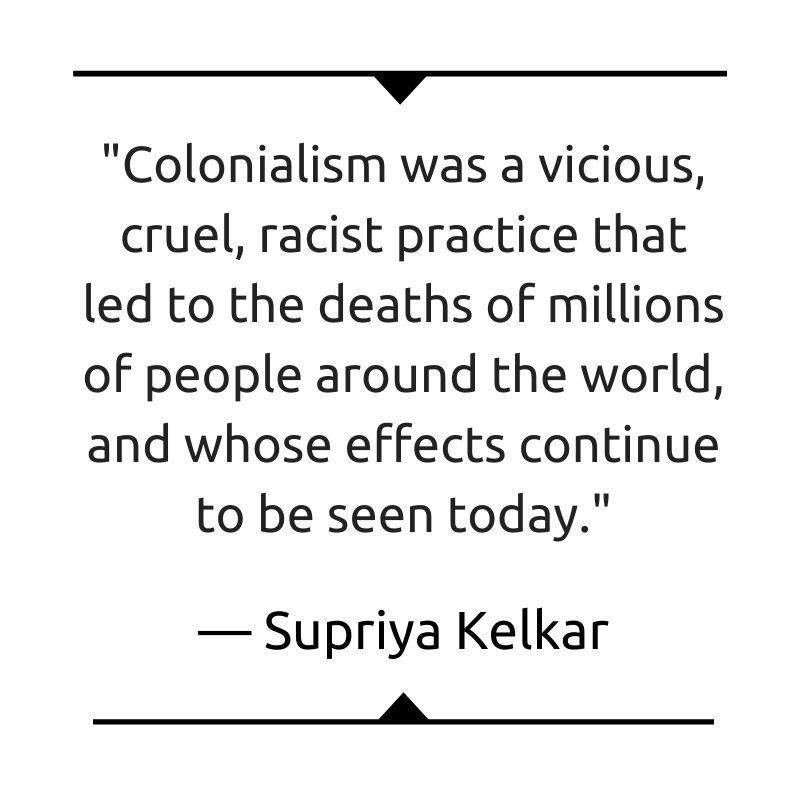 The journals and diaries the British memsahibs write in this story are based on real journals and travel books. I based Memsahib’s observation of the British dancing in the Taj Mahal on an excerpt from Fanny Parkes’s writing. She was a memsahib who spoke fluent Hindi and described British ladies and gentlemen having a band play on the marble terrace of the Taj Mahal, as they danced “quadrilles in front of the tomb.” Travel books written by memsahibs in India were widely read and passed around in the United Kingdom. They were one of the main ways people in the UK learned about the European experience in India. These books were many times filled with derogatory, racist observations. They used words like indolent, cunning, devious, scum, and servile to describe the Indian population whose land they had invaded. They pointed out problems in the land they were in without acknowledging their colonial interference was also a problem. And they viewed the traditions, cultures, and religions of India through a prejudiced, colonial gaze, in which the native ways were looked down upon, ridiculed, and considered backward or morally inferior.

According to author and historian William Darlymple, during the Victorian era, much of British colonial history was rewritten to take out the looting and plundering and reframe the brutality as an exchange of ideas, art, and railways from the West to the East.[1]

The toast Captain Keene gives “to the corpse of India” in the book is one I borrowed from not a memsahib but the British governor-general of Bengal, Lord Wellesley, who said it in one of his toasts. The story the collector tells about buying an Indian baby for a few coins is also a true story from the early 1800s, as was the remark the collector makes, referring to Indian children as “swarms of little, naked bronze children,” a quote which came from a magistrate stationed at Meerut.

I thought these true stories and quotes were necessary to accurately portray a colonizer’s mindset, since many journals and books have been published glorifying colonialism.

In reality, colonialism was a vicious, cruel, racist practice that led to the deaths of millions of people around the world, and whose effects continue to be seen today.

I hope this book serves as a reminder of what the experience of colonialism was for those who were colonized. I hope this book tells just one small part of a much bigger story that has largely been erased in our lifetime. And I hope this book encourages readers to question who is being centered in colonial stories and in all stories from fictional books to social studies textbooks, to find out who is telling the story, and to remember who is being left out. Because that matters.

Supriya Kelkar grew up in the Midwest, where she learned Hindi as a child by watching three Hindi movies a week. Winner of the New Visions Award for Ahimsa, Supriya is a screenwriter who has worked on the writing teams for several Hindi films and one Hollywood feature. Supriya’s books include Ahimsa; Strong as Fire, Fierce as Flame; American as Paneer Pie; and That Thing About Bollywood, among others. Visit her online at supriyakelkar.com.

Who We Are
Requesting Review Copies
Lee & Low Books
END_OF_DOCUMENT_TOKEN_TO_BE_REPLACED