This fall we released a new graphic novel by Coretta Scott King award-winning author G. Neri called Grand Theft Horse, which retells the life of his cousin Gail, a pioneer who challenged the horse racing world for the sake of one extraordinary horse. The graphic

“The graphic novel world isn’t full of true stories about nearly sixty-year-old, women of color who refuse to back down from wealthy, white men exploiting (and further corrupting) a corrupt system. Grand Theft Horse feels all the more timely and urgent because of it.” —Booklist starred review

In this blog post, author G. Neri shares some of the inspiration behind his newest graphic novel.

Why did you write Grand Theft Horse? I’m always saying to kids that everyone has a story worth telling. Sometimes you can find an amazing tale in your very own family history. Grand Theft Horse came about because of a Christmas party at my parents’ house back in 2010. Gail, a cousin of mine who I’d only met once when I was a kid was there. She was from the Texas side of the family, where everything was bigger than life. When I asked her what she’d been up to over the last 25 years, she looked around and whispered, “You know I’m a wanted woman, right?” Then she proceeded to tell me the jaw-dropping story of her life over the past 7 years. It was a whopper of a tale that I knew was a book right then and there.
So what was the tale? Horse racing is a brutal sport where far too many horses die. There was one injured thoroughbred that Gail had trained named Urgent Envoy, who was basically being raced to death. On Christmas Eve in 2004, at Hollywood race track in California, Gail stole that horse to save its life and rode off into the hills. She was charged with Grand Theft Horse, had her license to train racehorses taken away and was living in a van, homeless—all to save this one horse. She refused to give it back.
So on that description, she sounds a bit reckless. But that’s not exactly what happened, is it? No. She didn’t steal the horse—she rescued it. She was part owner and just wanted to rest the horse because it was injured. But the other owner overruled her and kept racing the horse until it got so bad that if it ran one more race, it’d have to be put down. She did everything in her powers to stop him, appealed to the racing association and animal rights groups, but to no avail. So barring a Christmas miracle, she took the matter in her own hands—and liberated the horse! 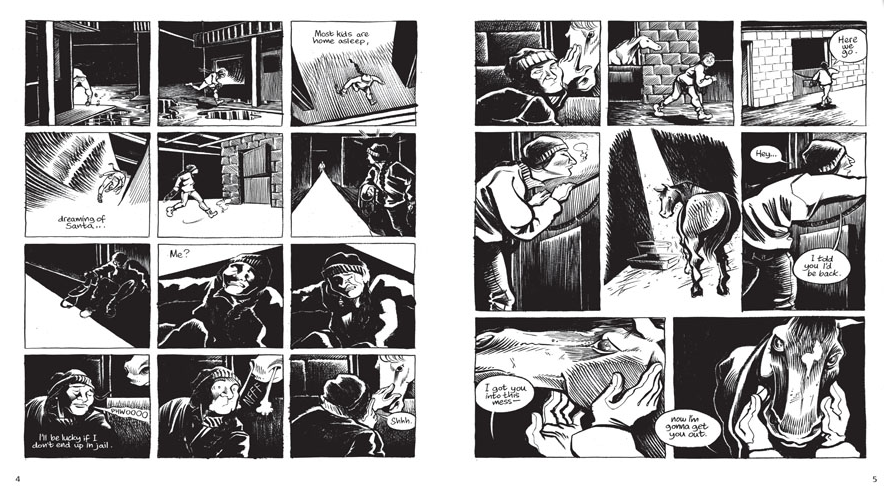 She sounds like a modern-day outlaw. She is tough as nails, but with a heart of gold. The other owner was a big city attorney who was used to getting his way. He pushed the DA to bring the grand theft horse charge—first time in 150 years! She faced 3-5 years in prison but the charges would have been dropped if she returned the horse. She won the case instead. The attorney brought civil charges. Gail, who had no money, decided to learn the law herself at night and defended her case all the way to the California Supreme Court. She was followed by P.I.s and had her livelihood taken from her. It took years but she won it all back—and never gave up the horse!
What happened to Urgent Envoy? He’s alive and well in his old age and maybe in the best shape of its life. Totally fit to race—except no place would race a 16 year old horse! He’s still laying low tho’.
So why did Gail do it—sacrifice everything in her life to save one animal? Gail stands up for those who can’t defend themselves. This horse came from an abusive life—it had many trainers who tried to beat it into submission. But Gail has a way with dangerous horses. She sees their life-force, the hurt and suffering. She connects, one being to another. Has ever since she was a teen. She connected with Envoy and became the first to ride it. Gail doesn’t think about herself in these situations—she’s totally selfless. She’s a superhero to me, which is why I wanted to tell her story in a graphic novel. I was wondering about that. You could have easily done it like one of those inspiring non-fiction books—a woman and an animal against the world. Yeah, but that seemed too obvious to me. I wanted to do something different that might reach a different—and younger audience. Like I said, I saw her as a superhero and now she is one, in her own comic book.
I was particularly touched by some of her teenage adventures, particularly with her horse named Spice. I remember that horse. She’d wanted one her whole life but her parents never had the space for a horse until they moved to the ranch. But instead, her dad bought a horse for her mother, not her! Luckily, the horse owner brought along a spare colt and her dad said, if she could catch it, she could have it. She spent the whole summer trying to run that thing down and failing. Then she figured she had to take a different tack: study the horse to understand its ways and come to it on its terms, not hers. That was the beginning.
What do you and her hope for this book? I hope it inspires young people to help change how horses are being treated in racing. I see it as an act of resistance and civil disobedience, something that seems to be going around these days. She’s a great example of what it takes to BE an example— discipline, sacrifice and a willingness to stand up for what’s right, no matter what the cost. Gail’s hope is to stop 2-year-olds from racing. It’s a big reason so many die—their bone and muscle structure can’t support the blunt force of racing so young. She is also against the doping of horses—a practice so ingrained that the drugs they’re on are listed next to the horse’s name in the Racing Forum. To me, Gail’s the Erin Brockovich of horses. I hope her story becomes a movie to see that idea come full circle.
Purchase a copy of the book here, and catch G. Neri  on Wednesday, November 7, 2018 at School Library Journal’s LibraryCon Live! Virtual Event!

G. Neri is the Eisner-nominated, Coretta Scott King Honor-winning author of Yummy: the Last Days of a Southside Shorty, which Flavorwire hailed as one of the top 25 essential graphic novels of all time. He has written ten books for young people, including the Lee Bennett Hopkins Promising Poet Award-winner, Chess Rumble, and his books have been translated into multiple languages in more than 25 countries. Mr. Neri lives on the Gulf coast of Florida with his wife and daughter. For more information, visit his website at gneri.com.

Who We Are
Requesting Review Copies
Lee & Low Books
END_OF_DOCUMENT_TOKEN_TO_BE_REPLACED