In this guest post, writer Rebecca En-Szu Hu-Van Wright compiles a list of 9 books to read with your loved ones for Valentine’s Day.

With Valentine’s Day right around the corner, there’s going to be a lot of talk about love…and there’s no better time to remember that family is often the first place children learn about love. Whether it is with a grandparent, a sibling, or an adopted parent, each relationship is special in its own way. To pay tribute to all the wonderful, different kinds of familial love, we’ve put together a book list of titles that celebrate and explore these unique bonds. 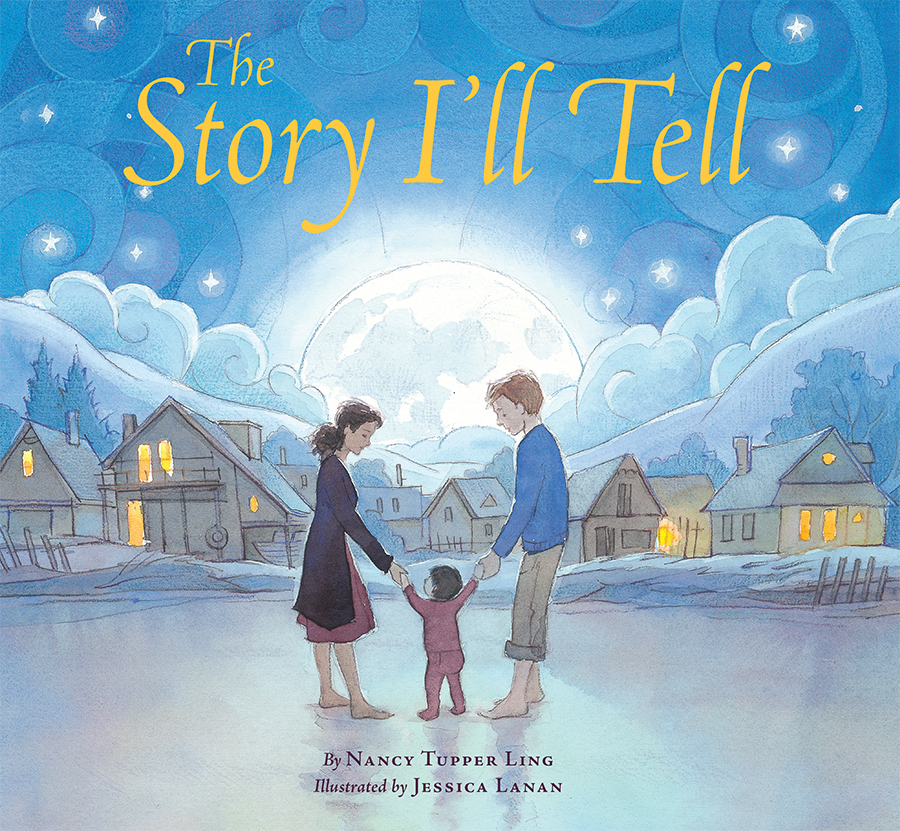 In this sweet ode to the relationship between an adoptive parent and child, a mother sets about telling her son the story of where he came from. Each of these fantastical tales, ranging from a hot air balloon drop-off to a dragon rescue, contains a small kernel of truth that pieces together the baby’s real journey from across the wide ocean into his new mother’s arms. 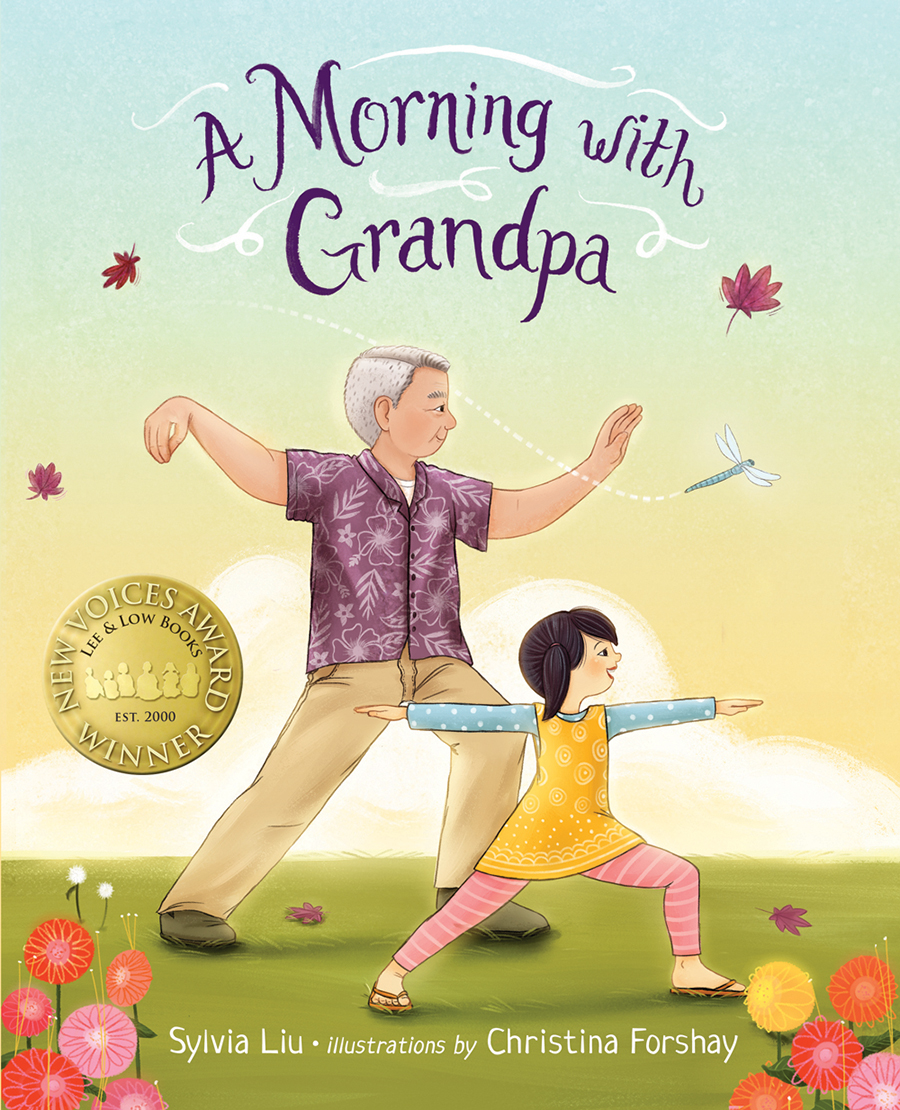 A Morning with Grandpa, by Sylvia Liu, illus. by Christina Forshay

Mei Mei wants to join her grandpa as he practices tai chi in the garden—and with her boundless energy, she can’t wait to learn the martial art…she’s so ready for high kicks and slicing chops! But tai chi isn’t that kind of martial art, Gong Gong tells her. Gong Gong teaches Mei Mei how to do each slow and graceful movement (though she can’t help but add her own flair). In return, Mei Mei tries teaching her grandfather the yoga she learned in school. This fun and spirited book not only celebrates the special bond between grandparent and grandchild, it also gets readers excited to try out some tai chi and yoga for themselves! 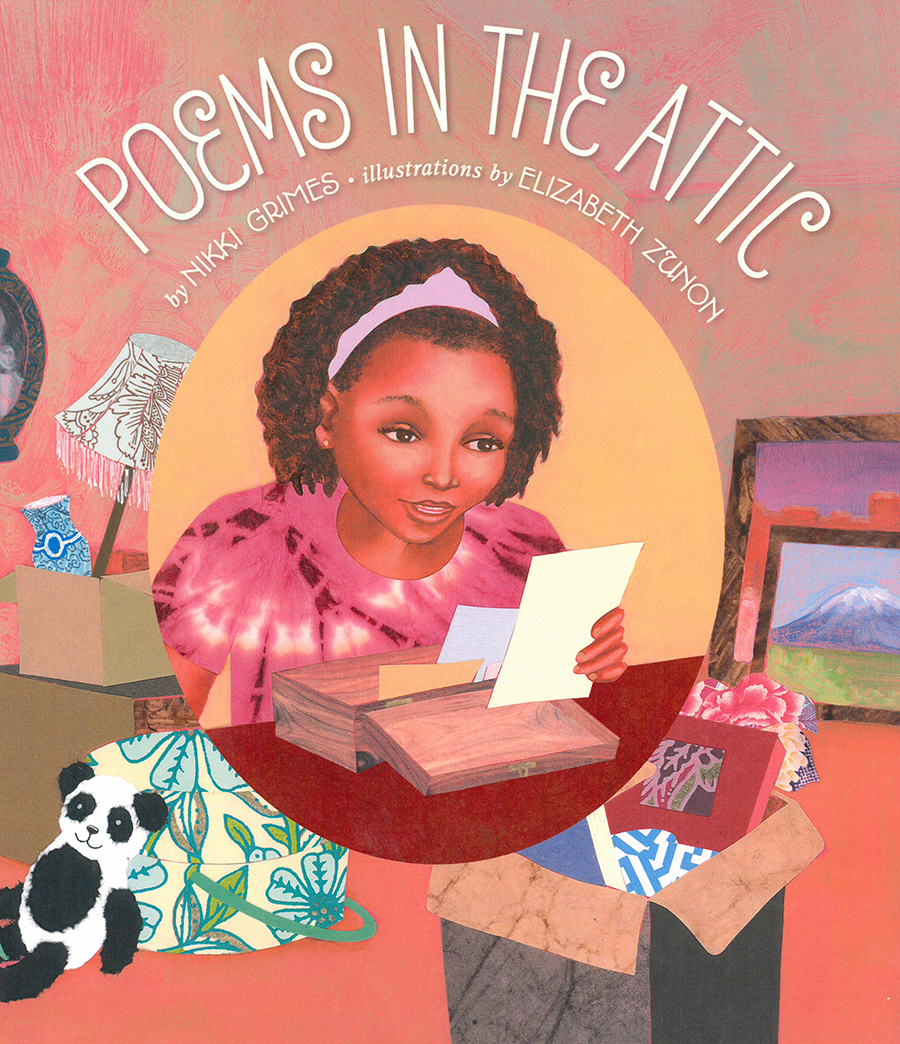 Poems in the Attic, by Nikki Grimes, illus. by Elizabeth Zunon

A young girl discovers a box of poems written by her mother in her grandmother’s attic. Through reading the poems, the girl learns more about her mother’s own childhood spent traveling across the United States and abroad with her family to follow her father in the Air Force. Feeling closer than ever to her mother after reading the poems, the young girl creates a book of her own poems and copies of her mother’s poems as a gift. This tender intergenerational story will speaks to every child’s need to hold onto special memories of home, no matter where that place might be. 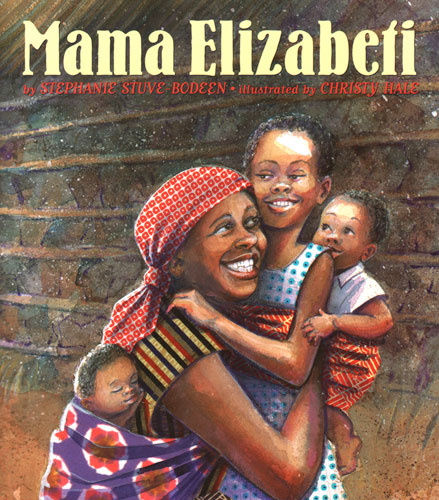 When Elizabeti gets a new baby sister, Elizabeti has to help take care of her younger brother, Obedi. But Elizabeti’s had a lot of practice: she’s been taking care of Eva, a rock doll, since Obedi was born! How much harder could caring for a real baby be? Apparently, a LOT. Obedi is kind of a pest…but Elizabeti is going to learn a very unexpected lesson on the special bond between brother and sister. 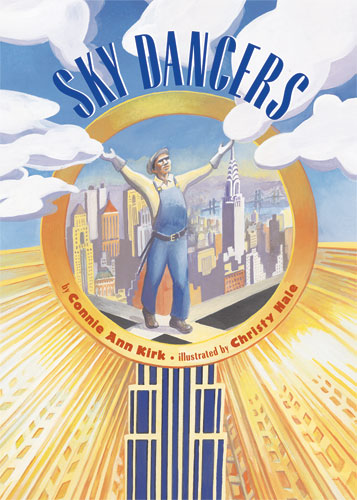 John Cloud lives on the Mohawk reservation with his family. His father, a steelworker, works in New York City building skyscrapers. He doesn’t get to come home much, and John Cloud misses him when he’s away. One day, his mother agrees to take him to see his father in the city. The hustle and bustle of the city are nothing like his hometown, but what really astonishes John Cloud is seeing his father on a high cross beam of the Empire State Building, the tallest skyscraper in the world. John Cloud feels as if his heart will burst with pride and amazement as he watches his father dance across the sky. 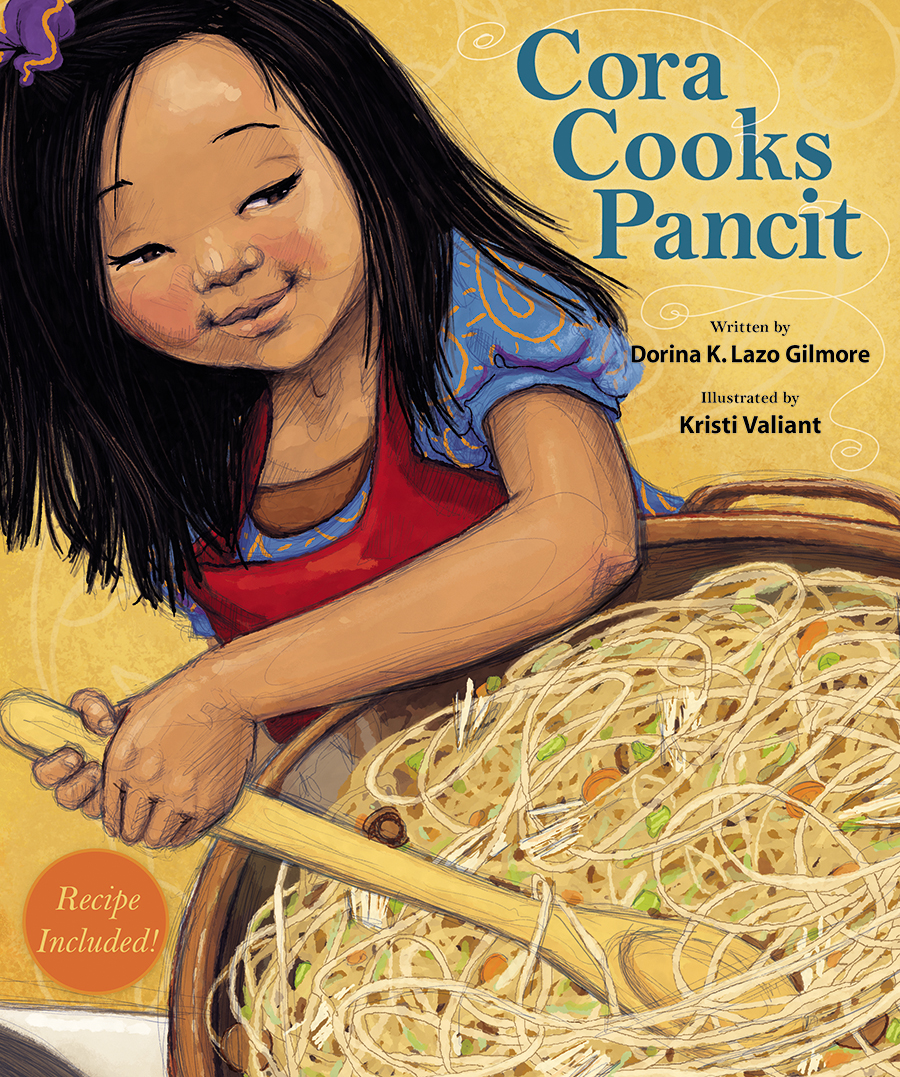 Cora loves helping out in the kitchen, but as the baby of the family, she always gets stuck with kid jobs like licking the spoon. When her brother and sister go out one day, however, she finally gets the chance to be Mama’s assistant chef. Luckily for Cora, they’re going to be cooking her favorite noodle dish: pancit. With a little help from Mama, Cora does the grown-up jobs like shredding the chicken and stirring the noodles. When dinner is finally served, Cora waits anxiously to see what everyone thinks of her cooking! This lovely book delightfully captures the warmth between mother and daughter as they share a piece of their Filipino heritage. 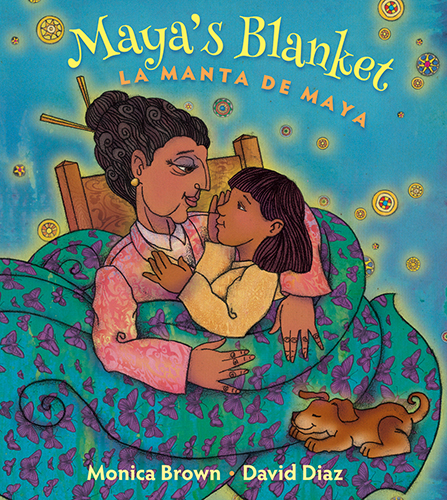 Inspired by the traditional Yiddish folk song “Hob Ikh Mir a Mantl” (“I Had a Little Coat”), this delightful bilingual story puts a child-focused, Latino spin on the tale of an item that is made into smaller and smaller items. Little Maya has a special blanket stitched for her by her grandmother. As Maya grows and the blanket becomes worn and frayed, her grandmother helps her to turn the blanket into a dress, a skirt, a shawl, a hair ribbon…and finally a bookmark. When Maya loses the bookmark, she decides to write a book about all the different lives her blanket has lived. 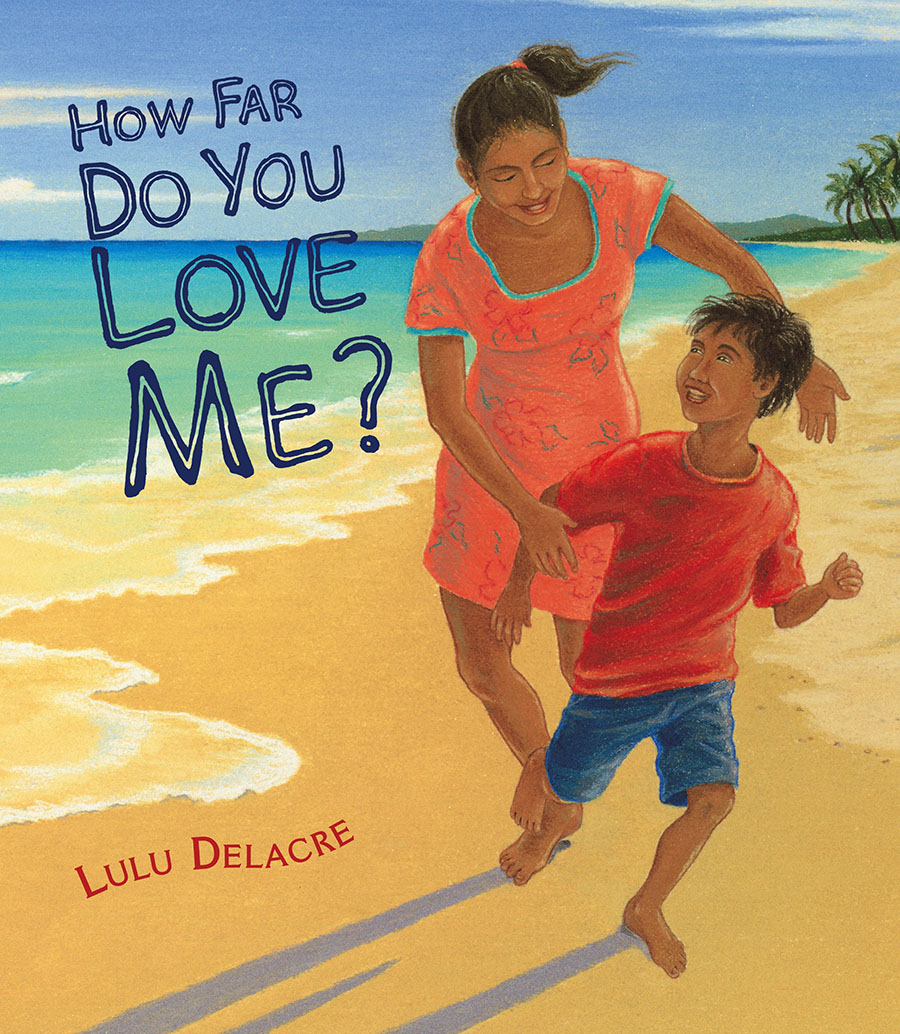 How Far Do You Love Me?, written and illus. by Lulu Delacre

A celebration of both love between parent and child and between humans and nature, this charming book will take readers on a visual adventure exploring thirteen different beautiful locations around the world. A bedtime favorite, How Far Do You Love Me offers a delightful twist on the traditional “I love you” book. 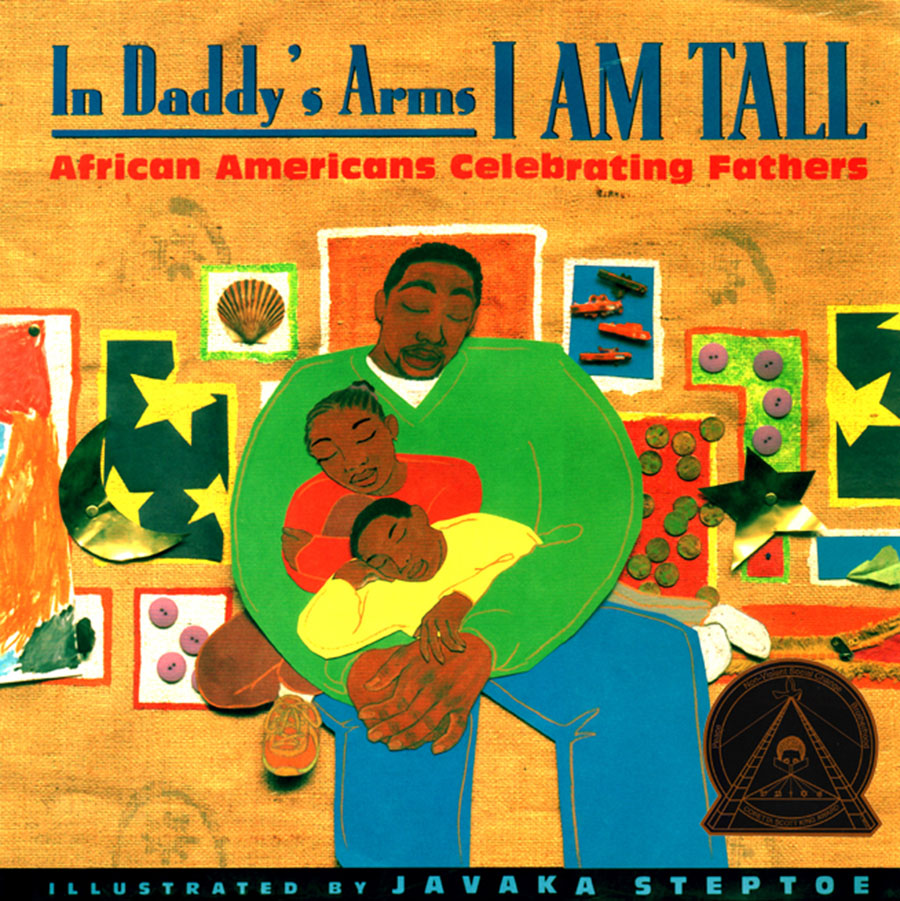 In Daddy’s Arms I Am Tall, by various poets, illus. by Javaka Steptoe

This collection of poems celebrates fathers and fatherhood in ways funny, gracious, and reverent. Featuring works by a range of prominent African-Amerian poets and writers, this book features striking and inventive illustrations by Caldecott Award winner Javaka Steptoe that bring each piece to life.

Rebecca En-Szu Hu-Van Wright was born and raised in New York City. She grew up with a great love for books, words, and people. After graduating with a degree in English Language and Literature, she moved back to NYC to dive headfirst into the world of children’s book publishing. Her interest and investment in children’s literature stems from the belief that every child deserves to fall in love with a book, which also inspired her to write two books of her own. In her spare time she’s writing more books, writing about her love of all things books, trying out new writing mediums, traveling around the country (and world), and following her imagination wherever it leads.

Who We Are
Requesting Review Copies
Lee & Low Books
END_OF_DOCUMENT_TOKEN_TO_BE_REPLACED