Today we are highlighting Summoning the Phoenix: Poems and Prose About Chinese Musical Instruments, an award-winning title from our Shen’s Books imprint, written by Emily Jiang and illustrated by April Chu. In 2013, we acquired the California-based Shen’s Books, which emphasizes cultural diversity and tolerance, with a focus on introducing children to the cultures of Asia.

Synopsis: Every musician knows that learning to play an instrument has its challenges and its rewards. There’s the embarrassing first day of rehearsal, but also the joy of making friends in the orchestra. 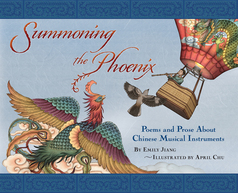 There’s dealing with slippery concert dress, or simply getting swept up in the music. The twelve children in this book are just like any other musicians practicing their instruments and preparing for a concert. But what sets these music lovers apart is that they all play traditional Chinese musical instruments in a Chinese orchestra.

Including both flights of fancy and practical considerations, lively poems capture each child’s musical experience with a different Chinese instrument, while sidebars provide more information about each one.

Resources for teaching with Summoning the Phoenix:

Additional collections including Summoning the Phoenix:

How have you used Summoning the Phoenix? Let us know!

Who We Are
Requesting Review Copies
Lee & Low Books
END_OF_DOCUMENT_TOKEN_TO_BE_REPLACED