“Having to sing in public. I don’t have a great voice and I can’t carry a tune.”

“Not having the courage to speak up when it counts. Also, since I was a kid, I’ve had this fear that someone living in the mirror would reach through the threshold and grab me while I’m brushing my teeth, which is a very vulnerable position if you think about it.”

“I have a huge fear of clowns. I think it’s because I watched Stephen King’s “It” when I was young with my cousins and it scarred me for life.”

“I have a fear of ghosts. I think there is one (or more) that lives in my parent’s house in the Hudson Valley. They tend to make themselves known when I’m home by myself.”

“I actually had a very strange phobia when I was growing up: I was afraid of buttons. I would not let my parents dress me in any clothes with buttons, did not like to touch buttons myself, hated sitting on chairs with buttons, and even avoided hugging people who were wearing button-down shirts. For most of my childhood, I thought it was just a weird thing that only I had. But thanks to the Internet, I’ve actually learned that there is a name for this phobia: Koumpounophobia. It’s pretty rare, but it’s estimated that nearly one in every 75,000 people experiences it. Most famously, Steve Jobs admitted that he has koumpounophobia and some speculate that his fear of buttons may have led to the invention of the iPhone and other buttonless devices. My phobia is fairly mild now but I still hate wearing button-down shirts, avoid button-up duvet covers, and prefer not to touch buttons (especially the small plastic ones) if I don’t have to!”

“My greatest fear is the darkness; especially when I have to sleep in a place where there’s absolutely no light.”

“My biggest fear is running out of poke balls during a hunt.”

Win a Copy of the Whole Marisol Series! 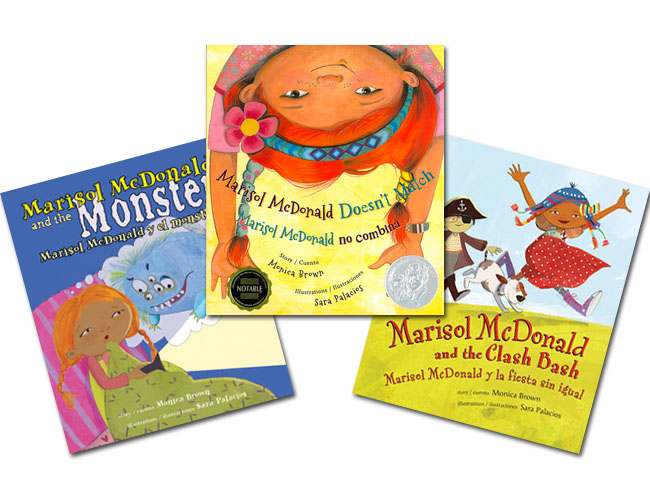 Enter below for a chance to win a signed set of the whole Marisol McDonald series! Open to US addresses only.
a Rafflecopter giveaway

Who We Are
Requesting Review Copies
Lee & Low Books
END_OF_DOCUMENT_TOKEN_TO_BE_REPLACED