What inspired you to write A Morning with Grandpa? Did you write it specifically for New Voices, or was it something you were working on already?

I was inspired by my dad, who was doing qi gong (a mind-body practice involving moving “qi,” or energy, around one’s body through breathing techniques), while we were vacationing together. He taught my daughters his breathing techniques, and that inspired the story of a grandfather teaching his granddaughter both qi gong and tai chi.

I wrote the draft as part of a year-long challenge, 12×12, where the goal is to write 12 picture book drafts in 12 months. After I wrote this story, I realized it was a great fit for the New Voices contest.

What did you do to prepare your manuscript for submitting to the New Voices Award?

My critique group gave me excellent feedback that improved my story. I also got invaluable feedback from an agent as part of a critique that came with a Writer’s Digest course.

While writing your story did you encounter writer’s block? What did you do to overcome it?

This was one of the few stories I’ve written where I didn’t experience writer’s block. The initial story came to me very quickly, though it was different than the final form. The first draft was told mainly in dialogue, and one of my critique mates encouraged me to incorporate more lyrical language. 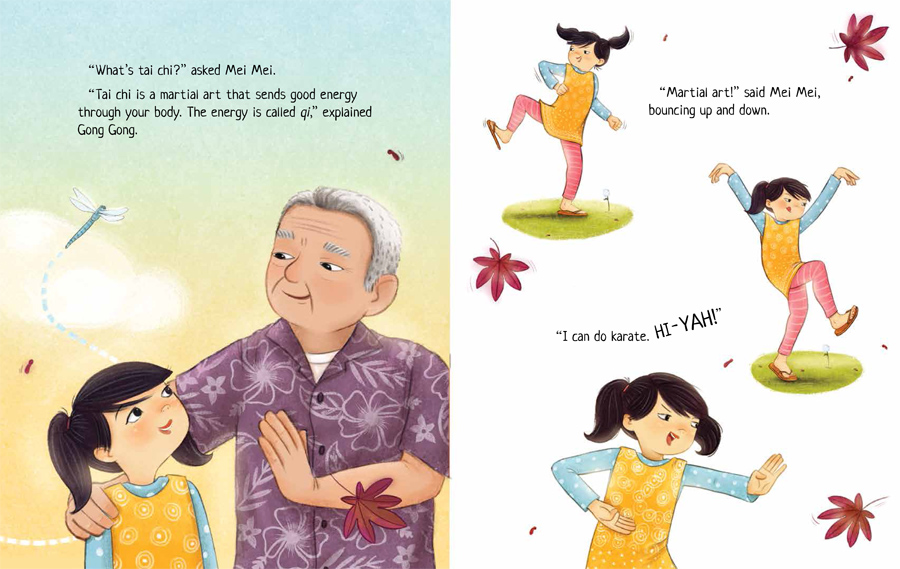 A Morning with Grandpa is a story about trying new things. When was a time you tried something new and how did it turn out?

About seven years ago, some friends and I took a women’s surf camp. It was so much fun that we kept going back for several years. At some point, I realized that surfing was not my sport, but my friends and I still occasionally get our boards and go out into the water. Last summer, our beach had several shark sightings so I stayed out of the water for the most part.

Who were some of your favorite writers growing up? Are there any books or writers that inspire you now?

Nowadays, I’m inspired by author-illustrators who tell stories in intriguing and beautiful ways, like Shaun Tan and Gene Luen Yang.

Finally, what advice would you give new writers interested in writing children’s books?

Read as much as you can, both in and outside the genre you are writing in, and read recently published books. As the head of my daughters’ school recently said, good readers make good writers; great readers make great writers. And knowing what is being published today will help you gauge where you are on your writing journey.

Take the time to learn the craft of writing, connect with other authors, and have fun.

Sylvia Liu was inspired to write this story by the playful and loving relationship between her children and their Gong Gong. Before devoting herself to writing and illustrating children’s books, she worked as an environmental lawyer at the US Department of Justice and the nonprofit group Oceana. She lives in Virginia Beach, Virginia, with her husband and their two daughters. This is Sylvia’s debut picture book.

Who We Are
Requesting Review Copies
Lee & Low Books
END_OF_DOCUMENT_TOKEN_TO_BE_REPLACED