From the US presidential candidates to the current situation in Europe, immigration is a hot topic. In our last blog post, we looked at the battle that’s currently going on in the Library of Congress over the term “illegal alien.” Many activists argue that the term is outdated, yet the Library of Congress chose to let it stand. In this guest post, Children’s Book Press author René Colato Laínez talks about his own experiences coming to the US from El Salvador and the label “illegal alien.”

At the 2016 American Library Association Midwinter Meeting, librarians passed a resolution urging the Library of Congress to change the subject heading from “Illegal Aliens” to “Undocumented Immigrants.” As the author of the new picture book, Mamá the Alien/ Mamá la extraterrestre, I totally agree. Undocumented Immigrants is a better subject to describe the people who arrived from other countries to live and work in the United States. They are undocumented because they don’t have the right papers to come to this country via an airport or through a border checkpoint entrance. They are also immigrants because they were born in another country. So the term Undocumented Immigrant fits the status of this group of people. 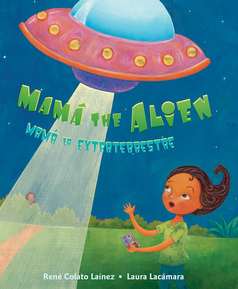 The term “Illegal Aliens” definitely is confusing to many, just like it was to me. Yes, I was an Undocumented Immigrant, and when I arrived in this country, I was called an “Illegal Alien.”

Since I was a small child in my native country of El Salvador, I was taught by my family and teachers that I needed to be a good boy. Especially during that time! There was a civil war in my country. Teachers and priests had been killed and many people would disappear from one day to the next. It was a scary time to grow up, and I always tried to be a good boy.

One afternoon, my fifth grade teacher said, “Soon, you will be teenagers and you have to know that ‘illegal acts’ only take people to jail or the cemetery. You need to do only ‘legal things’ in order to be safe.” Then he asked the class to make a list of “illegal acts” and to write a promise that we would be good citizens to have a better society. In my list I included among other things that using drugs, stealing, and not following the rules were illegal acts. Then I proudly promised never to do anything illegal.

As a result of the civil war in the 1980’s, many Salvadoran families left the country looking for a better life and opportunities. My family was not the exception. My mother left the country at the beginning of the war. In 1985 it was my turn to come the United States.

Soon after I arrived, some children in my new school called all the children who only spoke Spanish “illegals.” I did not understand why they were calling us “illegals.” I asked my father and he explained to me that they called us that because we did not have the right papers to come in an airplane or through the bridge in Tijuana.

I began to understand the term, but it did not make sense to me. In my country only people who had money were able to get papers to come to the United States. Poor people like my family did not have the privilege to get these documents. I did not understand why it was illegal to escape a civil war to look for a better life and opportunities in a country that was safe from war.

As I learned English, I remember our social studies teacher asked us to read the newspapers to write class reports. It was there when I first encountered the term “Illegal Aliens.” I kept reading the article and discovered that people who arrived to this country without the right papers were not only illegals, but were aliens too.

Every night, after I saw the movie E.T. the Extra-Terrestrial, I remember looking at the stars wondering if there was life on another planet. It was the 1980’s and, like everyone, I loved that little alien who wanted to go home. When I saw the stars, I wondered if there were aliens like E.T. and how it would feel to be lost on another planet.

Imagine my surprise to learn that I was also an “alien” and that “aliens” were not only from outer space, but from other countries, too. The word “alien” could have more than one meaning—it was also a synonym for foreigner. But when I looked at both words, even though foreigner was a longer word and harder to pronounce in English, it sounded much better to me than alien. I touched my hands and looked at my face in the mirror. Yes, I spoke another language but I had a face, arms and body just like the other children at school. I did not look like a strange creature from out of space. But being an alien implied that I could not be like other “normal” persons, because I was so different from them.

Years later, thanks to the Amnesty Program in 1989, my family had the opportunity to obtain the right papers to live and work in the United States. When I got my pink resident card, I read the blue words at the top of the card: “RESIDENT ALIEN.” “Wow,” I said to myself, “I am now a resident, but I am still an alien!”

I became a teacher and I was assigned to a bilingual kindergarten/first grade classroom. All of my students spoke Spanish. Many of them were born in the United States and others were like me, from other countries. My goal as a teacher was to teach them to read and write, but also to teach them to be smart children who are proud to be bilingual. In the country where I grew up— and almost everywhere around the world!—speaking other languages and being bilingual is nothing to be ashamed of. Instead, it is a wonderful achievement. 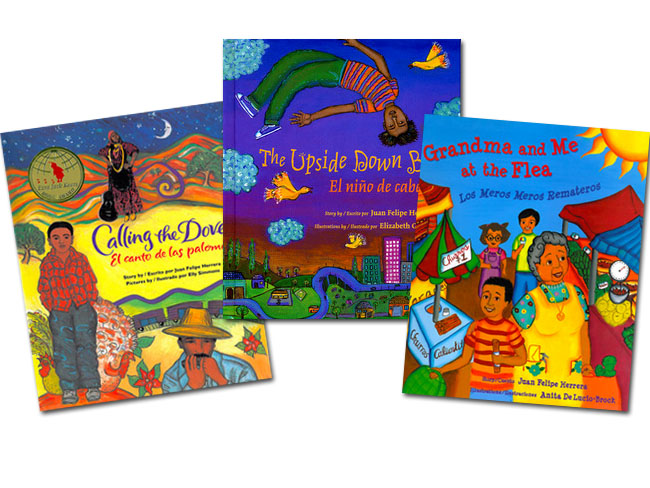 I began to read bilingual books to my students, especially Friends from the Other side/ Amigos del otro lado by Gloria Anzaldua, The Upside Down Boy/ El niño de cabeza and Super Cilantro Girl/ La Super niña del cilantro by Juan Felipe Herrera, My Diary from Here to There/ Mi diario de aquí hasta allá by Amada Irma Pérez, A Movie in My Pillow by Jorge Argueta and the poetry collection such us Laughing Tomatoes: And Other Spring Poems / Jitomates Risueños: Y Otros Poemas de Primavera by Francisco X Alarcón. My students loved these books because they were able to see their faces, lives, language and culture in the pages of these books. I began to write stories myself and my students began calling me, “The Teacher Full of Stories.” At the turn of the new century, I decided to follow the advice of children’s book authors like Alma Flor Ada, F. Isabel Campoy and Amada Irma Pérez who suggested that it was time to submit my work for publication. Since the first moment that I typed the words of my first book, Waiting for Papá/ Esperando a Papá, I knew I wanted to write books about children of color. My first book was published in 2004 by Piñata Books, an imprint of Arte Público Press.

My goal as a children’s books author is to produce strong multicultural children’s literature; stories where minority children are portrayed in a positive way, where they see themselves as heroes, and where they dream and hope for the future. I wanted to write authentic stories of Latin American children living in the United States.

These were the books that I had wanted to read when children called me “Illegal” at school. 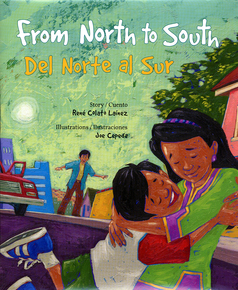 Soon, I was receiving emails and letters from parents, librarians, and teachers on how my first book was helping them in homes, libraries and the classrooms. Next I wrote about the importance of being bilingual in Playing Lotería/ El juego de la Lotería. In From North to South/ Del norte al sur, José and his father need to go south to cross the Mexican/ US border to be reunited with his deported mamá in Tijuana. I also write about the importance of living in two cultures and speaking two languages in books such as The Tooth Fairy Meets El Ratón Pérez, Juguemos al Fútbol and Football/ Let’s Play Fútbol and Football and in my two sing-along books, Señor Pancho Had a Rancho and ¡Vámonos! Let’s Go!.

In 2016, my newest picture book Mamá the Alien/ Mamá la extraterrestre will be published by Lee & Low Books. In the story, Sofía discovers a Big Secret. She finds a card that belongs to her mother. It has mamá’s picture and the word alien on top of the card. Sofía cannot believe it. Her mother is an alien.

Sofía feels just like me when I discovered that I was also an alien. I am excited that Mamá the Alien/ Mamá la extraterrestre will soon be in the hands of parents, teachers, librarians and children. In this book readers will find out in a humoristic way that we are all children of planet earth. There are no aliens among our families. We can be from different countries but are all human beings.

Come meet René Colato Laínez at ALA this year. He will be signing with LEE & LOW (Booth #1469), as well as participating in a REFORMA panel on bilingual books. You can see our full ALA schedule here.

René is a graduate of the Vermont College MFA program in Writing for Children & Young Adults and a faculty member of Sandra Cisneros Macondo Writers Group. He is a bilingual elementary teacher at Fernangeles Elementary School, one of Los Angeles Unified School District’s most innovative schools. He is also a columnist for LA BLOGA, the Latino literature blog and LOS BLOGUITOS the blog for children learning to speak Spanish. He has appeared on Univision and Telemundo, and is a regular participant at conferences and book festivals in the United States and Latin America.

Diversity 102: The Library of Congress Battle Over “Illegal Alien”

4 thoughts on “No More “Illegal Aliens””

Who We Are
Requesting Review Copies
Lee & Low Books
END_OF_DOCUMENT_TOKEN_TO_BE_REPLACED