Shame the Stars by Pura Belpré Award-winning author Guadalupe Garcia McCall (Summer of the Mariposas, Under the Mesquite) is a reimagining of Romeo and Juliet set against the Mexican Revolution in 1915 Texas.

Shame the Stars is set to be released Fall 2016! We’re excited to share a first look at the cover with you today.

Eighteen-year-old Joaquín del Toro’s future looks bright. With his older brother in the priesthood, he’s set to inherit his family’s Texas ranch. He’s in love with Dulceña—and she’s in love with him. But it’s 1915, and trouble has been brewing along the US-Mexico border. On one side, the Mexican Revolution is taking hold; on the other, Texas Rangers fight Tejano insurgents, and ordinary citizens are caught in the middle.

As tensions grow, Joaquín is torn away from Dulceña, whose father’s critical reporting on the Rangers in the local newspaper has driven a wedge between their families. Joaquín’s own father insists that the Rangers are their friends, and refuses to take sides in the conflict. But when their family ranch becomes a target, Joaquín must decide how he will stand up for what’s right.

Shame the Stars is a rich reimagining of Romeo and Juliet set in Texas during the explosive years of Mexico’s revolution. Filled with period detail, captivating romance, and political intrigue, it brings Shakespeare’s classic to life in an entirely new way. 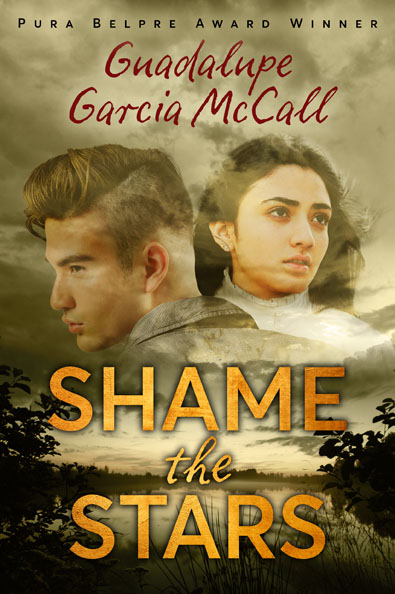 Thanks to YA Interrobang for hosting the cover reveal! We can’t wait to hear what you think of the cover.

Who We Are
Requesting Review Copies
Lee & Low Books
END_OF_DOCUMENT_TOKEN_TO_BE_REPLACED