Just in time for Halloween, we’re excited to announce the release of two new novels from our science fiction and fantasy imprint, Tu Books: Killer of Enemies, a post-apocalyptic retelling of an Apache monster slayer legend by award-winning Native American author Joseph Bruchac, and The Monster in the Mudball, a hilarious supernatural mystery set in England. 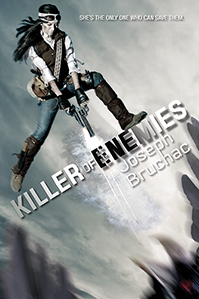 In Killer of Enemies, seventeen-year-old Apache hunter Lozen hunts monsters to ensure the protection of her family from the Ones, maniacal warlords who rule in a post-apocalyptic Southwest. Fate has given Lozen a unique set of survival skills and magical abilities. Soon she realizes that with every monster she takes down, Lozen’s powers grow, and she connects those powers to an ancient legend of her people. It soon becomes clear to Lozen that she is not just a hired gun. As the legendary Killer of Enemies was in the ancient days of the Apache people, Lozen is meant to be a more than a hunter. Lozen is meant to be a hero. 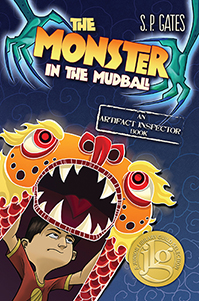 In this Junior Library Guild selection, eleven-year-old Jin must run around the English town of Newcastle-upon-Tyne trying to track down a monster named Zilombo. Jin teams up with Chief Inspector of Ancient Artifacts A. J. Zauyamakanda, or Mizz Z, for short. Zilombo gains new, frightening powers every time she hatches. Now the monster is cleverer than ever before . . . and it appears that Jin’s baby brother has disappeared! Will Jin’s baby brother be next on Zilombo’s menu? As the monster’s powers continue to grow, Jin and Mizz Z must find a way to outsmart Zilombo!

Happy birthday to both titles! We can’t wait to hear what you think of them!

*Today marks the release of the hardcover versions of both titles. E-book versions are also available.

One thought on “Scary New Releases: KILLER OF ENEMIES and THE MONSTER IN THE MUDBALL!”

Who We Are
Requesting Review Copies
Lee & Low Books
END_OF_DOCUMENT_TOKEN_TO_BE_REPLACED