Recently, I gave a presentation to a college class of future teachers. Their professor asked me: “What advice would you give a teacher who has introduced to her or his class a controversial book that has been challenged by a parent?” I am not sure the answer I gave at the time was a good one, but I have pondered the question some more and would like to offer a few suggestions.

Talk about what the book does well. Point out the main themes of the book and how it is important for today’s 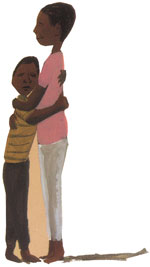 children to learn about them in a safe environment. Our book Brothers in Hope: The Story of the Lost Boys of Sudan tells the story of a group of boys who escape the slaughter of their people in Sudan. I recall a reviewer, who was also a mother, stating that her child did not need to worry that she might come home one day and not find her parents there. I am a parent myself, and I can empathize with this sentiment. But being a New Yorker in a post 9/11 world, I know that bad things can happen to good, innocent people close to home. Brothers in Hope keeps the most grisly violence off the page, and while there are scary parts throughout the book, the story does an excellent job of emphasizing the fact that when faced with the most dire of circumstances, the boys organized, stuck together, and looked out for one another. The boys became a family in the absence of family, and what they accomplished is a testament to children’s courage and the inner strength that enabled them to face insurmountable odds and survive. Brothers in Hope is a sad story, but it teaches children about the world we live in and shows that even acts of extreme cruelty can lead to amazing acts of grace.

Point to the awards. If the book has won awards, have information about them at the ready. Strong reviews and national awards mean the book was deemed exceptional in the eyes of reputable institutions, librarians, and educators—so you are not alone in thinking the book has something valuable to say to young readers. Our book Yummy: The Last Days of a Southside Shorty has received five starred reviews. Although many reviews noted that Yummy is a “gut-wrenching” read, it fills an important niche about the perils of gang life.

Authenticity means something. Our book Baseball Saved Us was once banned from a school because it used the term “Jap”. Since the story takes place during World War II, the racist terminology of the 1940s helps define the discrimination experienced by Japanese Americans of that era. Being able to discuss racism in the safety of a classroom gives teachers an opportunity to address why racism is hurtful and how it is still prevalent today.

These were just a few thoughts about how to defend a controversial or challenged book. If you have other ideas you would like to share, please post them below.

Note: The books I’ve mentioned are appropriate for a range of age/reading levels but are not intended for very young children.

5 thoughts on “Defending the Book in the Classroom”

Who We Are
Requesting Review Copies
Lee & Low Books
END_OF_DOCUMENT_TOKEN_TO_BE_REPLACED