Starting us off this week, Speakeasy brings us five Asian American actors talking about their careers. They talk about the racial barriers that still exist, but also about how their hard work has landed them major roles.

American Latinos also face racial barriers, but a new study shows an interesting wrinkle: compared to people of Mexican, Dominican, or other Hispanic heritage, Puerto Ricans in New York City have worse education and employment rates. There are no clear explanations for why this would be the case, but the New York Times article looks at a few of the issues.

Also in the Times is a look at how some Navajo leaders are looking to move their people forward, ecologically and economically, with a shift from coal to wind power. For them, it’s also a move that reinforces their beliefs: “In Navajo culture, some spiritual guides say, digging up the earth to retrieve resources like coal and uranium . . . is tantamount to cutting skin and represents a betrayal of a duty to protect the land. ” 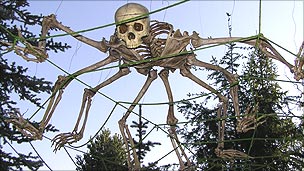 Lastly, with Halloween just two days away, the BBC brings us a look at cultural differences in celebrating Halloween in the UK and US. Of course, while we Americans may be more Halloween-crazy, the Brits get to follow it up with Bonfire Night.

However you do (or don’t) celebrate Halloween, have a great weekend!

Who We Are
Requesting Review Copies
Lee & Low Books
END_OF_DOCUMENT_TOKEN_TO_BE_REPLACED