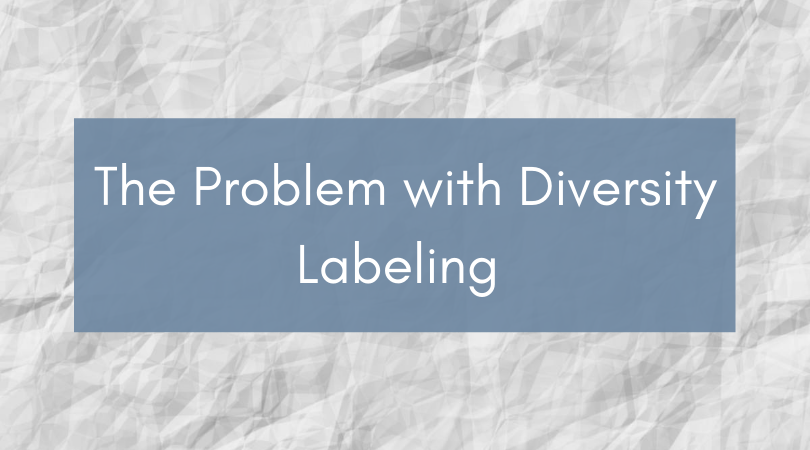 In this guest post, librarian Alexandria Brown discusses the issues with labeling books as “diverse” and other ways we can build and promote a more equitable library collection.

Every so often, the question of whether or not to add a spine label designating “diverse” books makes the rounds. Many condemn the practice, but lots of library staff persist in labeling. Like most diversity, equity, and inclusion (DEI) issues in librarianship, many of my colleagues are still operating within a white (and cisgender and heterosexual) supremacist framework. It is an understandable predicament to be in – after all, many library degree programs are not as strong as they could be in advocating for DEI and decolonization. So let’s examine the question of diversity labeling and see if we can’t get to a better understanding of why it’s problematic.

Before we dive in, I want to make sure a few things are clear. First, I’m only going to discuss labeling for race/ethnicity, not LGBTQIAP+. While the issue is similar for both, there are a few key differences significant enough to merit a separate conversation. Second, intent versus impact. We often like to say “assume good intentions,” but that does not, should not, and cannot negate or undo the offense. Good intentions that cause harm still require an apology and action plan of how to do better in the future. Third, you are allowed to be uncomfortable. If you find yourself feeling uncomfortable by the end of this, sit with it. Feel it. Consider the roots of your discomfort. Understand that your comfort level does not merit tone policing or demands for civility, insisting on good intentions or bothsidesism, or anything else that forces the oppressed to accommodate the needs of the oppressor over their own. My goal is not to assuage discomfort but to engage in a difficult conversation.

The two most common reasons I hear from library staff who use “multicultural,” “diverse,” or “POC” labels are that 1) their patrons want to more easily find those books; and 2) that libraries already use genre labels and diversity is no different. Whew, there’s a lot to unpack here! 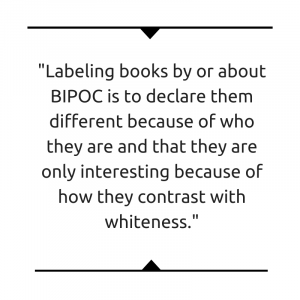 Although people often use “multicultural,” “diverse,” and “POC” as if they were synonyms, they aren’t. “Diverse” or “diversity” can relate to almost anything: gender, sexual identity, romantic identity, religious beliefs (or lack thereof), citizenship, place of birth, political affiliation, ability, age, etc. “Multicultural” is exactly what it says on the tin: different cultural groups sharing a space. Neither are inherently about race, though both are frequently used to imply that race is a factor. “POC” stands for “people of color.” I prefer to use the term BIPOC (Black, Indigenous, and Person of Color). Indigenous people are not people of color; furthermore, “POC” is often used as a way to avoid saying “Black” and because of that many Black people (including me) prefer being called Black instead of POC.

If you plan to use labels with the words “multicultural,” “diverse,” or “POC” on them, are you using those terms correctly? How narrowly will you define multicultural? Will you include books by white authors and/or about white characters? If not, why not? Whiteness is a racial affinity and cultural identity. Before you even get to the labeling stage, how will you determine whether or not a book is “multicultural,” “diverse,” or “POC?” Who will do the physical labor of creating the relevant criteria? Who will evaluate, pull, label, reshelve, and update the catalogue?

But wait – there’s more! Are you labeling based on the author, the main character, or both? What if the book has a large cast but not all are BIPOC? Would you add a label to books about BIPOC by white authors like The Ten Thousand Doors of January by Alix E. Harrow or Beneath the Sugar Sky by Seanan McGuire? What about racially problematic books like American Dirt by Jeanine Cummins or The Help by Kathryn Stockett? Would you label books written by BIPOC that feature main characters that aren’t BIPOC like The Kingdom of Back by Marie Lu?

It’s great that your patrons are seeking out books by and about BIPOC! And yes, many libraries choose to separate out mysteries, science fiction/fantasy, westerns, and “regular” fiction. But identity is not the same thing as genre. To reduce my life as a queer (asexual and aromantic) biracial Black cis woman down to a genre is tokenism and othering at best, offensive and regressive at worst. Tokenism and othering are damaging microaggressions with long lasting ramifications. Labeling books by or about BIPOC is to declare them different because of who they are and that they are only interesting because of how they contrast with whiteness. Labeling does not celebrate diversity but instead centers whiteness as the norm and relegates BIPOC-ness to the abnormal, thereby reinforcing white supremacy. 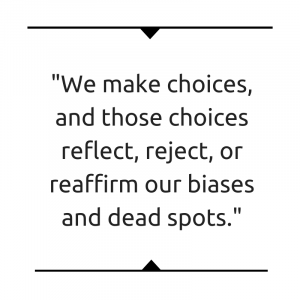 There are many practical ways to highlight BIPOC authors and works, especially #OwnVoices, without resorting to stickers on spines, such as handselling, readers advisory, programs, end-caps, shelf-talkers, staff picks, booktalks, book clubs, giveaways, and social media. Create book lists that are easily accessible to your patrons on your library blog, website, or OPAC, in patron-accessible binders, on display in the collection area, or on social media. Always feature a wide array of identities while ensuring that representation isn’t only occurring during a heritage month (i.e. Indigenous authors only being displayed during Native American Heritage Month). Crucially, make sure those books and authors avoid stereotyping the group they’re meant to represent -and that the author themself is not problematic.

You may also need to rethink how you use your OPAC and/or ILS. Replace outdated and derogatory subject headings and DDC numbers, incorporate the use of tags, and add in links to staff-created book lists. If your collection does not have enough books to represent multiple races/ethnicities, sexual/romantic identities, abilities, body types, etc. then it may be time to reevaluate your collection maintenance and ordering processes.

We want our patrons to read books that provide windows, mirrors, sliding glass doors, and prisms, but we first must set up a system where diversity, equity, and inclusion are the default rather than the exception. I firmly believe that neither library staff nor libraries are neutral. We make choices, and those choices reflect, reject, or reaffirm our biases and dead spots. Labels, even when used with good intentions, tokenize the BIPOC reader and author by presuming whiteness as the norm. We cannot claim to be working toward diversity, equitability, and inclusion while othering books based on race.

About the author: Alexandria Brown is a librarian, local historian, writer, and author. They have a BA with honors in Anthropology and Sociology, a Master’s of Library and Information Science, and a Master’s in US History. They write about speculative fiction and young adult literature for Tor.com, Locus Magazine, as well as on their blog. Find them on Twitter at @QueenofRats.

12 thoughts on “How Labeling Books as “Diverse” Reinforces White Supremacy”

Who We Are
Requesting Review Copies
Lee & Low Books
END_OF_DOCUMENT_TOKEN_TO_BE_REPLACED