We’re excited to reveal the full cover for Indian No More, a moving middle grade novel about Regina, a ten-year-old Umpqua girl, whose family is forced to relocate from Oregon to Los Angeles during the Indian termination era of the 1950s. Written by the late Charlene Willing McManis, and completed by author Traci Sorell, Indian No More (September 2019) draws upon Charlene’s own tribal history and we are so excited to see it all coming together!

In this blog post, editor Elise McMullen-Ciotti dives into the symbolism and meaning behind the cover of Indian No More and how the cover came to be. 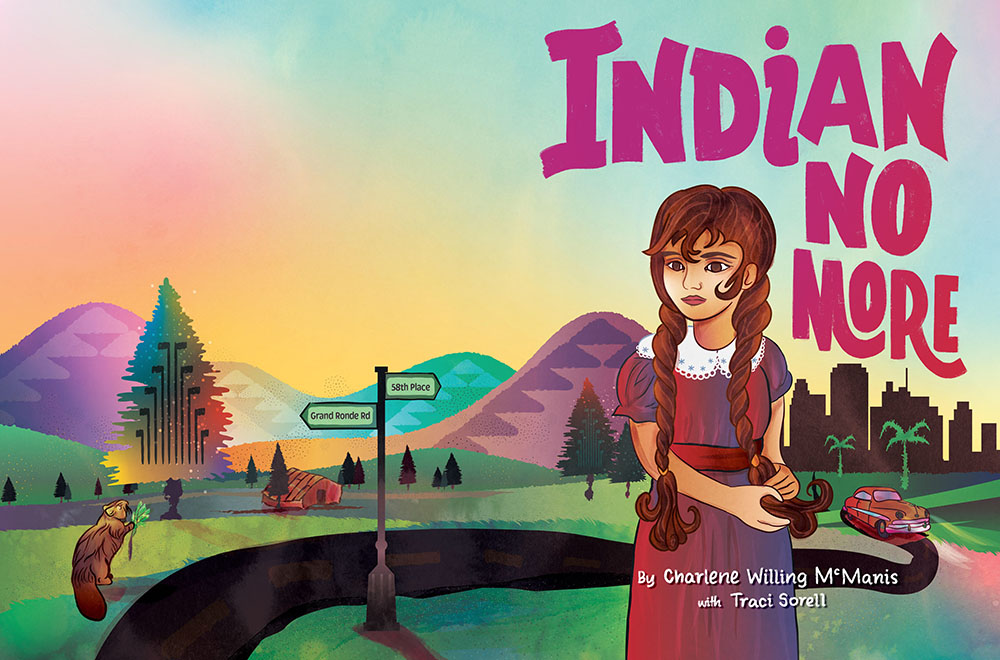 It was very important for me as an editor and for our writer, Traci Sorell, to have a Native American artist illustrate the cover of Indian No More. As Native people ourselves (Cherokee Nation), we knew that a Native artist would “get it” and make it a priority to reflect and represent the protagonist’s and author’s tribe.

After reviewing the work of about 30 Native artists with Tu Books publisher Stacy Whitman, we approached artist Marlena Myles  (Spirit Lake Dakota, Mohegan, Muscogee Creek) to do the cover—and we’re so glad she said yes!

GUIDE TO THE COVER

Marlena deftly and beautifully incorporated meaning that may not be noticed without knowing a bit about Umpqua art and culture. However, those at The Confederated Tribes of Grand Ronde certainly will! Here’s a guide for our soon-to-be-readers:

When the federal government signs a bill into law that says Regina’s tribe no longer exists to them, Regina becomes “Indian no more” overnight—even though she lives with her tribe and practices tribal customs, and even though her ancestors were Indian for countless generations. Now with the tribe losing its land base in Oregon, Regina’s father signs the family up for the Indian Relocation program and moves them to Los Angeles. Regina finds a whole new world in her neighborhood on 58th Place. She’s never met kids of other races, and they’ve never met a real Indian. For the first time in her 10-year-old life, Regina comes face to face with the viciousness of racism, personally and toward her new friends. The family struggles without their tribal community and land. At least Regina has her grandmother, Chich, and her stories. And at least they are all together. In this moving middle-grade novel drawing upon Umpqua author Charlene Willing McManis’s own tribal history, Regina must find out: Who is Regina Petit? Is she Indian? Is she American? And will she and her family ever be okay again?

Look for Indian No More to be released by the Tu Books imprint of Lee & Low Books in September 2019. Let us know what you think of the cover in the comments below!

The late CHARLENE WILLING MCMANIS (1953–2018) was born in Portland, Oregon, and grew up in Los Angeles. She was of Umpqua tribal heritage and enrolled in The Confederated Tribes of Grand Ronde. Charlene served in the U.S. Navy and later received her Bachelor’s degree in Native American Education. She lived with her family in Vermont and served on that state’s Commission on Native American Affairs. In 2016, Charlene received a mentorship with award-winning poet and author Margarita Engle through We Need Diverse Books. That manuscript became this novel, which is based on her family’s experiences after their tribe was terminated in 1954. Charlene passed away in 2018, knowing that her friend Traci Sorell would complete the revisions she was unable to finish.

TRACI SORELL writes fiction and nonfiction books as well as poems for children. We Are Grateful: Otsaliheliga ᎣᏣᎵᎮᎵᎦ, her Sibert Honor and Orbis Pictus Honor award–winning nonfiction picture book, received starred reviews from Kirkus Reviews, School Library Journal, The Horn Book, and Shelf Awareness. A former federal Indian law attorney and policy advocate, she is an enrolled citizen of the Cherokee Nation and lives in northeastern Oklahoma, where her tribe is located. For more about Traci and her other works, visit tracisorell.com.

Elise McMullen-Ciotti is a freelance editor, writer, and educator who has worked in children’s book publishing since 2012. Her clients have included Scholastic, Arthur A. Levine, Coffee House Press, Macmillan, Roaring Brook Press, Outland Entertainment, Shadow Mountain, Lee & Low and its imprint Tu Books. A member of the Cherokee Nation, Elise’s biggest goal as a book editor has been to promote and publish Native stories and authors. As a writer, she is an essayist and blogger and is set to publish two books (TBA) in 2021. Before her career in publishing, Elise worked in food, television, and then food in television. She lives in New York City with her husband, a large personal library, and an open kitchen.

One thought on “Cover Reveal: Indian No More by Charlene Willing McManis with Traci Sorell”

Who We Are
Requesting Review Copies
Lee & Low Books
END_OF_DOCUMENT_TOKEN_TO_BE_REPLACED