Lee & Low Books offers hundreds of great books for sixth graders. Our books include English, Spanish, and bilingual titles; books about many different cultures; books that span a wide range of subjects and themes; and both fiction and nonfiction. Browse our 3-6 classroom collections to see what we offer, and check out our other book lists by grade:

While we have hundreds of titles to choose from, here are 7 of our absolute favorite diverse books for sixth grade! In 1942, after Mahatma Gandhi asks Indians to give one family member to the freedom movement, ten-year-old Anjali must learn to accept the new changes in her life when her mother decides to join. Along with this comes many more adjustments designed to improve their country and use “ahimsa”—non-violent resistance—to stand up to the British government. When her mother decides to reach out to the Dalit community, the “untouchables” of society, Anjali is forced to get over her past prejudices as her family becomes increasingly involved in the movement. See the Teacher’s Guide here.

2. John Lewis in the Lead: A Story of the Civil Rights Movement by Jim Haskins and Kathleen Benson, illus. by Benny Andrews:

How does an Alabama sharecropper’s son grow up to help change his world? For John Lewis the journey began as a boy experiencing the injustice of segregation and the inspiring words of Dr. Martin Luther King Jr. After high school Lewis joined with Dr. King and other civil rights leaders who believed in fighting segregation peacefully. From Nashville, Tennessee, to Selma and Montgomery, Alabama, Lewis was in the forefront of the major civil rights protests of the 1960s. In the face of physical attacks, he perservered with dignity and a devotion to nonviolence, helping southern black people gain the right to vote. Lewis continued his commitment to human rights with words and action from his home base in the South, straight to the nation’s capital. In 1986 John Lewis was elected to represent Georgia in the United States Congress, where he continues to serve today. See the Teacher’s Guide here.

3. Surfer of the Century: The Life of Duke Kahanamoku by Ellie Crowe, illus. by Richard Waldrep: 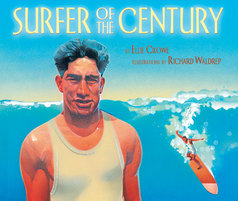 Growing up in Honolulu with the Pacific Ocean as his backyard, Duke Kahanamoku learned to swim and surf at a young age. By his early twenties, Duke’s lightning-fast swimming won him a place on the 1912 United States Olympic team and a gold medal in the 100-meter freestyle race. Over the years Duke struggled with racism and financial troubles, but by the end of his twenty-year Olympic career, he was a six-time medal winner. Today he remains a legendary waterman and an inspiration to all to live life with aloha. See the Teacher’s Guide here.

4. Etched in Clay: The Life of Dave, Enslaved Potter and Poet by Andrea Cheng:

Sometime around 1815, an enslaved young man named Dave was brought to Edgefield, South Carolina, the center of a pottery-producing area known for the alkaline glazes used on the stoneware. Dave was taught how to turn pots and jars on a pottery wheel by one of his first owners. As Dave’s talent flourished, he created pieces of great beauty and often massive size. He also somehow learned to read and write, in spite of South Carolina’s strongly-held fear of slave literacy. And then Dave did something even more incredible—he began to sign his jars and carve many of them with sayings and poems that reflected his daily life and experiences. He spoke out against slavery not by protesting or revolting, but by daring to write at all. Today Dave is considered to be a master craftsperson whose jars are among the most sought-after pieces of Edgefield pottery. See the Teacher’s Guide here.

Vivien Thomas’s greatest dream was to attend college to study medicine. But after the stock market crashed in 1929, Vivien lost all his savings. Then he heard about a job opening at the Vanderbilt University medical school under the supervision of Dr. Alfred Blalock. As Dr. Blalock’s research assistant, Vivien learned surgical techniques. In 1943, Vivien was asked to help Dr. Helen Taussig find a cure for children with a specific heart defect. After months of experimenting, Vivien developed a procedure that was used for the first successful open-heart surgery on a child. Afterward, Dr. Blalock and Dr. Taussig announced their innovative new surgical technique, the Blalock-Taussig shunt. Vivien’s name did not appear in the report. Overcoming racism and resistance from his colleagues, Vivien ushered in a new era of medicine—children’s heart surgery. See the Teacher’s Guide here.

From the start, Arthur Ashe was an unlikely tennis player. As a young boy growing up in Richmond, Virginia, in the 1940s, he was small and skinny—and barred from most tennis courts because he was black. With patience, hard work, and humility, Arthur pursued his dream. Defeating player after player, match after match, he blazed a path on the once all-white tennis courts, becoming the first African American man to win a Grand Slam tournament and the top-ranked tennis player in the world. Throughout his career, Arthur Ashe fought to overcome adversity, opening doors in his sport and promoting human rights. See the Lesson Plan from the Library of Virginia here. 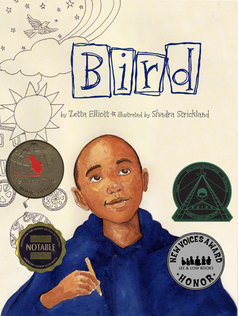 Young Mekhai, better known as Bird, loves to draw. With drawings, he can erase the things that don’t turn out right. In real life, problems aren’t so easily fixed. As Bird struggles to understand the death of his beloved grandfather and his older brother’s drug addiction, he escapes into his art. Drawing is an outlet for Bird’s emotions and imagination, and provides a path to making sense of his world. In time, with the help of his grandfather’s friend, Bird finds his own special somethin’ and wings to fly. See the Teacher’s Guide here. 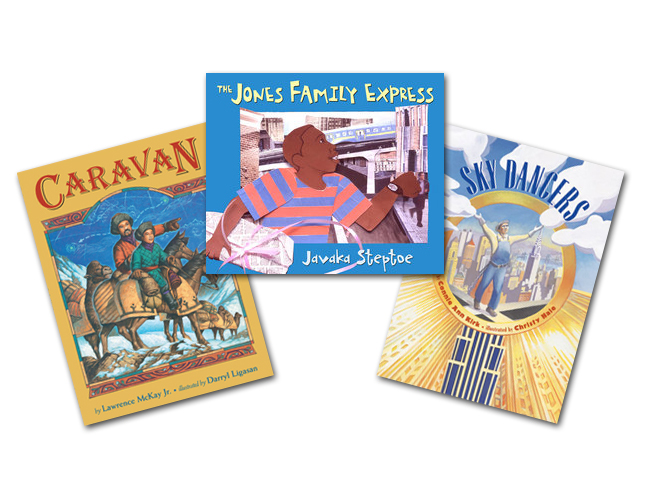 Adventures Around the World Series

Who We Are
Requesting Review Copies
Lee & Low Books
END_OF_DOCUMENT_TOKEN_TO_BE_REPLACED