In 2015, we released an infographic and study on the diversity gap in the Academy Awards. The study looked at racial and gender diversity over 87 years of the Oscars, through 2015: 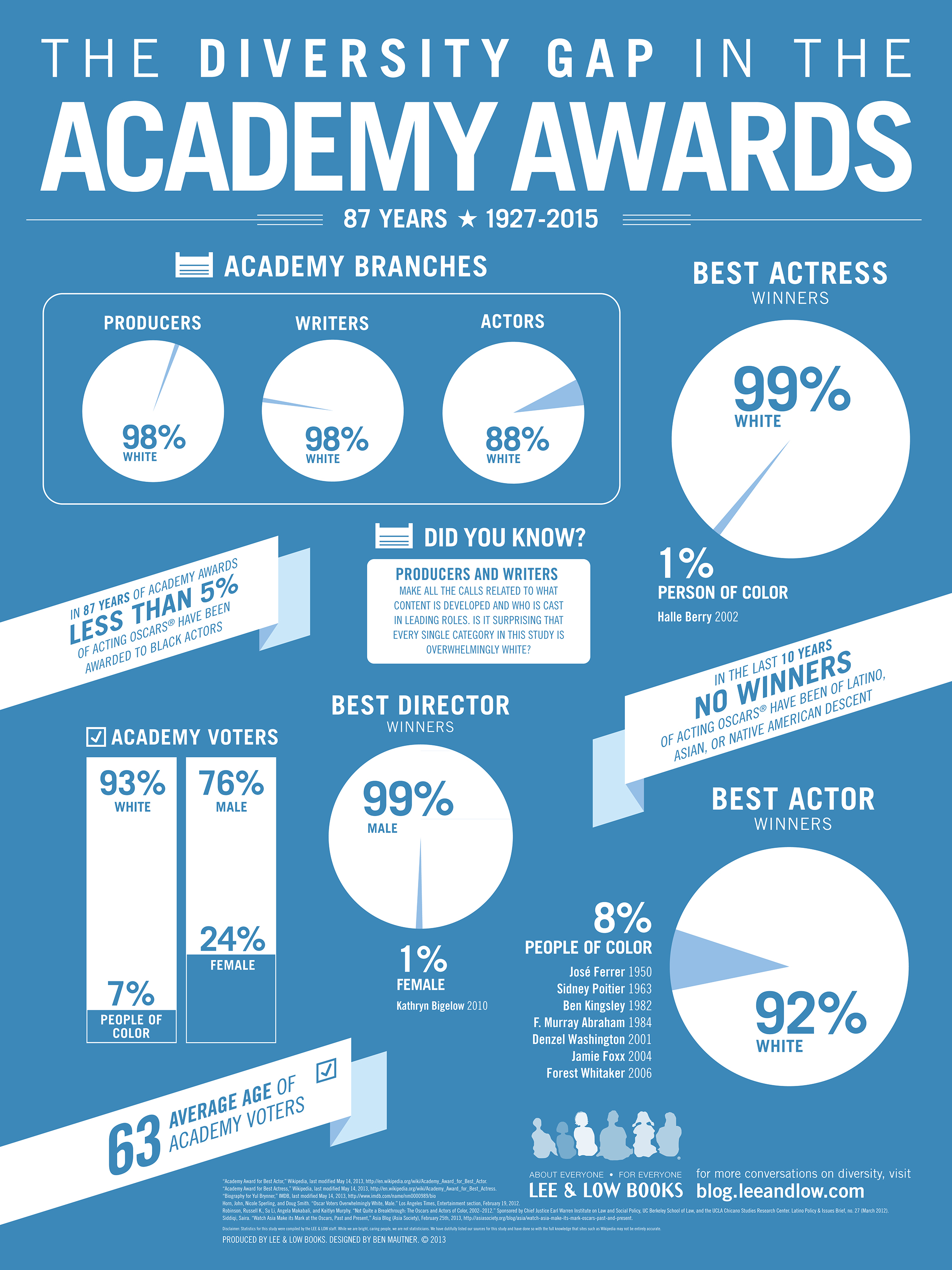 This year in particular, many records have been broken in regards to diversity in nominations. After receiving criticism about the lack of diverse nominations in the Oscars, the Board of Governors of the Academy of Motion Picture Arts and Sciences aimed to diversify its voting pool last year. According to the Times article, “Diversity at the 2017 Oscars: These Are the Records That Were Just Broken,” six black actors were nominated (which is a record), 7 nonwhite actors were nominated (tying 2007’s record), and 9 films and documentaries with nonwhite subjects were nominated as a result.

Though these new records are encouraging, Hollywood still has a lot of work to do. There is still a huge dearth in representation of Asian, Latino, and other nonwhite communities as well as the LGBTQ community and the disabled community. Also, very few women have been nominated for directing, writing, and other non-acting categories. Here’s what April Reign, the creator of the #OscarsSoWhite campaign, had to say about the road ahead regarding Hollywood inclusivity in a Teen Vogue article:

One year does not correct the omission of recognition of people from traditionally underrepresented communities for over 90 years by the Academy. While we have seen some great films that reflect the black experience this year, #OscarsSoWhite again is more inclusive than black artists. We’ve not had films that reflect the nuance and diversity of other marginalized communities. So it’s imperative that we continue to push so that all theatergoers are able to see movies that reflect them when they pay their hard-earned dollars to go to a theater. And that should happen not just during award season, but all year long. There is a lot more work to be done, and until all groups are properly and sufficiently represented in films and in entertainment generally, #OscarsSoWhite will continue. It is disrespectful to all other marginalized groups to say “because black people got it, you guys should be happy with that.” They should not. And I am not. And so I will continue this campaign.

In the end, the fight for inclusion in movies, television shows, directing, writing, and all facets of entertainment continues. We hope to see consistent change, but that still remains to be seen. All theatergoers, binge-watchers, and readers deserve to have their experiences reflected in the entertainment they consume. Representation truly does matter.

Further resources on how to teach content and visual literacy using Lee & Low Books’ infographics series on the Diversity Gap:
Using Infographics In The Classroom To Teach Visual Literacy

One thought on “The Diversity Gap in the Academy Awards: Some Diversity Records Broken, But Still More Work to Do”

Who We Are
Requesting Review Copies
Lee & Low Books
END_OF_DOCUMENT_TOKEN_TO_BE_REPLACED