Tiny Stitches: The Life of Medical Pioneer Vivien Thomas is the compelling story of Vivien Thomas, an African American surgical technician who developed the first procedure used to perform open-heart surgery on children. In this interview, author Gwendolyn Hooks discusses the legacy of this medical pioneer and what inspired her to write about a man whose research helped to save countless lives.

What inspired you to write about Vivien Thomas?

A friend’s grandson was diagnosed with tetralogy of Follet. She watched the movie Something the Lord Made which is the story of Vivien Thomas. She loaned me the movie and the rest is history! He is a hero. He did so much and so few know his name. I saw his portrait at Johns Hopkins Hospital and felt him saying “Tell my story.” Vivien is a strong role model for young people even after all these years. Sure he was disappointed and mad after he lost his money when his bank closed during the Great Depression. Vivien was tough and resilient. He put aside his college dreams and found a way to support himself. A door closed, but he opened another. I think one of his messages to young people would be to find that other door.

What did you find most surprising in your research of Thomas’s life?

Even as a young boy of 13, his mind was on his future. He worked afterschool and summers with his father. Other boys were playing sandlot baseball and I’m sure Vivien did on occasion, but he was passionate about earning money and putting it to good use. He bought his school clothes and deposited the rest in a savings account.

Is there a fact about Thomas that you didn’t get to put in the book?

Before Vivien found the job at Vanderbilt, he worked for a contractor. One time he had to repair a wooden floor. He repaired it, but it wasn’t his best work. His boss could tell where he laid the new wood and told him it wasn’t acceptable. Vivien did it over and the second time, it was seamless. He learned a lesson that day that he never forgot. Do your best work the first time. In medicine there might not be a second time. 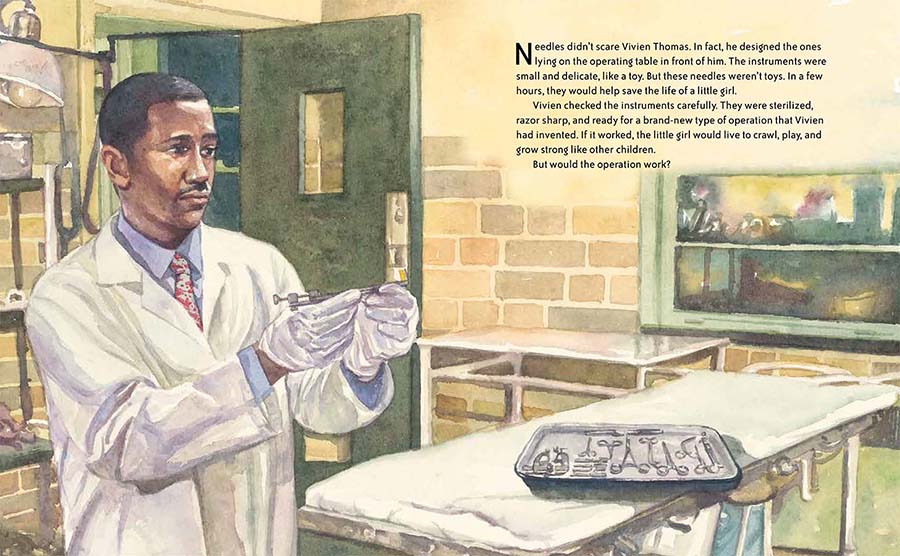 The most painful parts of Tiny Stitches, for us, were the scenes in which Thomas encounters the injustices of racism in spite of his achievements. Why was it important for you to write about these realities, and what do you think young readers can learn from them?

I wanted readers to know he didn’t lead an easy and carefree life. Despite your intelligence and achievements, there are some who will never give you credit for it. It’s important to know who you are, what you are capable of and never let anyone tell you otherwise.

Vivien Thomas was not given the credit he deserved for his leadership in “blue baby” operations until 1971, how do you think Thomas must have felt once he received recognition?

He was overjoyed that the Old Hands Club asked him to sit for his formal portrait (the one in Johns Hopkins Hospital) and planned a formal recognition ceremony. That and the honorary degree, the faculty appointment were all appreciated by Vivien. He had such a generous spirit. I’ve talked with a former surgical resident who remembers his generous spirit even after his contributions were ignored. I think it’s only human to feel discouraged, but those feelings did not deflate his love of research.

What advice would you have for young readers about following their dreams in spite of obstacles?

If an obstacle is placed in your path, veer left or right, but keep going. Keep stretching and moving forward. Read books, especially biographies, and learn how others did it. Vivien prepared himself for his dream. He was an excellent student. Study. Join organizations in your school or community. This is a perfect way to learn about careers you never knew existed and perhaps find a mentor.

What do you hope readers will take away from Vivien Thomas’ story?

I hope readers and especially young ones will remember that dreams and goals can change, but your life won’t if you don’t go after new ones. If Vivien did it with all that was set against him, you can do it now.

Gwendolyn Hudson Hooks was born in Savannah, Georgia. Her father was in the Air Force, so Gwen and her family moved a lot when she was a child. Her first stop in every new city was the local library where she got her new library card. Gwendolyn is the author of many books, including Bebop Books’ Can I Have a Pet? and Lee & Low’s Tiny Stitches. Gwen now lives in Oklahoma City, Oklahoma, with her husband and their three children. Visit her online at gwendolynhooks.com.

One thought on “Interview: Gwendolyn Hooks on the Unsung Hero of Medicine, Vivien Thomas”

Who We Are
Requesting Review Copies
Lee & Low Books
END_OF_DOCUMENT_TOKEN_TO_BE_REPLACED