Sometimes to save the day, a good girl’s gotta be bad.

White Collar meets Oceans 11 in our new YA novel, Perfect Liars. We interviewed author Kimberly Reid on how to craft the perfect heist novel, her writing tips, and breaking stereotypes.

Why was it important to you to depict an interracial relationship in your story?

In the real world, interracial relationships exist. I’ve been in one with my Korean husband since college. Teen readers may not think this is a big deal, but when we met in the late 1980s, long before K-pop, K-dramas, and Korean fusion food trucks made the culture more accessible to Americans, it was kind of a big deal. Back then, as Koreans immigrated and settled into traditionally black neighborhoods of large cities, relations between our communities were tense. I wasn’t quite as young as the characters in Perfect Liars, but I remember what it was like to be young and in a relationship for which I had no model, one that was seen as “exotic” at best and flat-out wrong at worst. The world has shifted a lot in thirty years, and kids have more models now but it’s still important to me that my books reflect the real world. And unfortunately, we’re often reminded how little shift there has been. Just last week, people lost their minds over an interracial Old Navy ad.

What research did you do to create a convincing heist novel?

That aspect of the book probably took the least research since the heist isn’t a huge player in the story, though I had to do a lot of Googling on the high-end antiques business. I didn’t want the target of the thieves to be the usual things—money, jewelry, art—though that’s in there, too. So I decided to go with fine antiques. The legal aspects took up most of my research time. Luckily, I come from a law enforcement family so it was fairly easy to ask any question that popped into my head. When I was writing the book, my much younger sister had recently passed the bar exam and she’d also been an English major in undergrad, so she was the perfect person to help. The law was really fresh for her, and she didn’t get bored with all my writerly talk of plot and motivation. I don’t really have a favorite heist writer, but I have watched many heist movies, like The Italian Job and Ocean’s Eleven (the original and the newer versions), Rififi, The Score, and Inside Man. But it was actually a TV show called Leverage that gave me part of the inspiration for Perfect Liars. The main premise came from an alternative school in my town that is run by a juvie court judge and was once housed in our city’s justice center, along with courtrooms and the sheriff’s office. But I needed to turn that into a story and decided to have former juvie kids use their criminal skills for good. In Leverage, a band of criminals, led by a former investigator, use their various talents to help people in need.

How is writing fiction different than writing a memoir (No Place Safe)?

The biggest difference is telling the truth versus making stuff up. With fiction, you can make the story go the way you want. Writing memoir is all about the truth and sometimes the truth hurts. No Place Safe is the story of growing up during the two-year-long Atlanta Missing and Murdered Children investigation, on which my mother was a lead investigator. I was thirteen when the murders began, and I wrote the story from my thirteen-year-old’s perspective, but with the insight of an adult looking back on that time. It was my first published book, and writing it helped me figure out what I wanted to do from that point on. I like writing from a teen point of view (but I find it more difficult than writing for adults!). Though I write crime fiction, I prefer using humor in my stories rather than a darker voice. Most importantly, I’d much rather invent stories than tell the truth.

What advice would you give to writers that want to write heist novels?

In a heist novel, the entire book is about the planning and execution of a heist, and then how the characters deal with the fallout. There is some of that in Perfect Liars, but it isn’t really a heist novel. Publishers Weekly calls it “a socially conscious crime thriller” and I like that description. The heist more or less sets up the story; it isn’t the story. If I had to give it a subgenre, it’s probably more con artist than heist. But I’d give the same advice I’d give a writer of any genre: do your research. I do lots of research and still miss something every time. And your readers will call you on it every time. I can be a little Type A and used to think, “Oh, no! How did I miss that?” Now, I realize I can’t change the book once it is out in the world, so I view it as, “I have some really smart and observant readers. They’ll keep me on my toes as I research the next book.”

A few months ago, LEE & LOW released the Diversity Baseline Survey, which revealed that a significant percentage of publishing staff is comprised of white women. Were you shocked by these numbers? What is a way publishing might be able to improve these numbers? I’ve been black all my life, and a traditionally published writer for nearly a decade, so no, I wasn’t surprised. More surprising—and heartening—was the response to the survey from the participants. I was glad to see Big Five publishers participate. As sad as the numbers are, I think being truthful about them and willing to contribute honest data is a good start. As far as improving the numbers, I think decision-makers need to make an aggressive effort to recruit diverse employees. I don’t mean run job ads on sites focused on minorities or maybe participate in diversity job fairs for new college grads. I mean start early, show marginalized high school students the possibility of publishing as a career through education and internships. The science disciplines are doing this through STEM program education and recruitment as early as middle school. Another suggestion is to let go of the idea that everyone must work in Manhattan, which puts a publishing career out of economic reach for most. The film industry has figured that out. While Hollywood may always be the headquarters, lots of movies are being made in studios in lower cost cities like Atlanta and Vancouver, and using local production talent. Maybe have self-contained imprints, from acquisitions to sales reps, as field offices. I think this would also help publishing become less New York-centric and keep publishers in closer touch with what’s going on in the rest of the country in terms of demographics, cultural trends, and social movements. And to loop back to my first suggestion, publishing needs more decision-makers from marginalized backgrounds. It’s hard to acknowledge there’s a problem when you’ve never experienced the problem, and you can’t fix what you don’t perceive as broken, or at least, fully understand how broken the thing is.

I won’t lie—I can be judgey. A big part of being a writer is watching the world and trying to understand people, and hopefully, attempting to empathize with some of what we see. It’s hard to do that if you aren’t willing to see there’s more than one perspective. So I brought a lot of that to Drea’s character. I also wanted to show that we are not monolithic. Of the relatively few books that are published with brown or black leads, the odds favor us being depicted as broke, oppressed, undereducated, and in need of salvation. Drea is the opposite of these things despite being a racial minority. And also despite that, she views the world from a place of privilege. Part of her evolution is seeing that she has obtained her privilege in a questionable way, and also that, when it comes down to it, some people will always see her the way they want, no matter her money, class, or education. She learns this by seeing how others like her are treated and eventually realizes she has the means to help correct some of that.

The push for more diverse books has increased in the past two years. What do you hope to see from forthcoming books?

I’d like to see more fun books with racially marginalized characters. While these things are huge aspects of our past and, unfortunately, what still lies ahead, we aren’t always trying to throw off the yoke of oppression, dealing with the legacy of slavery or the marginalization that comes with being immigrants. Books from white writers with white leads don’t carry this burden. They can be fun for entertainment’s sake, and that’s just fine. Historically, publishing hasn’t given the same freedom to writers of color. We have had to come with the deep and profound, or not come at all. Kids of color should have a variety to choose from, should be able to walk into a library or store and pick the thing they’re dying to read, not the thing an adult (publishers, teachers, librarians, parents) has deemed they should read because of what they look like or where they came from. That choice can include a history of their people, but let them also have a fun mystery, an interracial romance, a fantasy in which a kid who looks like them is the slayer of dragons. Every young reader deserves that.

What’s one of your favorite sentences, either from your own writing or from someone else’s?

Can I give a few? I love this description of a season’s change from Toni Morrison’s Sula:

“Then summer came. A summer limp with the weight of blossomed things. Heavy sunflowers weeping over fences; iris curling and browning at the edges far away from their purple hearts; ears of corn letting their auburn hair wind down to their stalks. And the boys. The beautiful, beautiful boys who dotted the landscape like jewels, split the air with their shouts in the field, and thickened the river with their shining wet backs. Even their footsteps left a smell of smoke behind.”

I bow to Ms. Morrison.

If you were putting together your own team to pull off a heist, who would be on it and why? 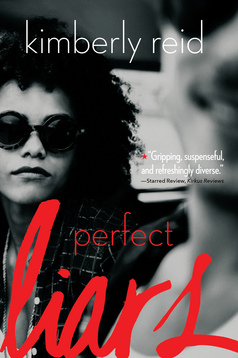 I’d need a computer genius. I once worked in the tech world—which is increasingly becoming the world—and computer geeks make it go round. I’d want a great con artists or two because I wouldn’t want to use brute force. If I’m going to be a criminal, I’d rather manipulate people into giving me what I want rather than physically hurting them into doing it. They’re both bad, but for some reason, the con seems less bad than the violence. Certainly I’d want someone who could break into anything, probably two thieves—one high tech, one old school because you never know if you’re going to run into an antique safe or something. Those would be the minimal requirements. Nice-to-have additions would be a chemist, physicist, and an engineer. They are like the MacGyvers of the world. Between them, when all else fails, they could probably figure a way out of any jam.

Who We Are
Requesting Review Copies
Lee & Low Books
END_OF_DOCUMENT_TOKEN_TO_BE_REPLACED