Last month we announced the six finalists for our 2015 New Visions Award. The Award recognizes a middle grade or young adult novel in the sci-fi, fantasy, or mystery genres by an unpublished author of color (our first New Visions Award winner, Ink and Ashes, will be released this June!).

As our award committee gets to know the finalists through their novels, we wanted to give our blog readers a chance to get to know these talented writers as well. We asked each finalist some questions. In previous posts, we interviewed finalists Grace Rowe and Andrea Wang, and finalists Shilpa Kamat and Rishonda Anthony. 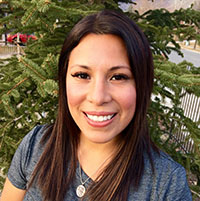 Tell us a little about the main character in your novel.

My main character is twelve-year old Minerva Soledad Madrid and she can’t wait to grow up. The oldest of three girls, she’s a Latina who speaks Spanish and who’s proud of her cultural heritage. Her parents are of Argentine descent, and her mom (who’s raising the girls by herself) teaches the girls the Argentine traditions she grew up with. She sings the lullabies of her childhood, and most importantly, she passes on her belief in the Peques (short for Pequeñitos, the Little Ones), the Argentine fairies, who follow their families as they move around the world. Because the family doesn’t have a support system, Minerva had to step up and be a second mother for her sisters while their mother works two jobs to make ends meet. Minerva wants to be the first Latina president of the United States. She’s determined and focused. She doesn’t believe in magic, but she wants to, oh how she wants to believe the fairies take care of her and her sisters while their mom is away! In the story, Minerva learns how to be a child again (kind of like a reverse Peter Pan) because magic is really all around us!

What advice would you give your younger self about writing?

If I could send my younger self a message, it would be: follow you heart, write what you want to write, and trust your voice. I wrote my first story in the first grade, and looking for validation, I showed it to my uncle. Instead of the praise I expected, he told me a few things that didn’t work in his expert opinion. After that, I started writing with my inner editor reading over my shoulder, until I got to a point in which I wasn’t sure anyone would ever be interested in what I wanted to say. Don’t pay attention to the inner editor! Get the story out of your heart! There’s a lot of time to fix things during revision. Revision is your friend.

I also would say a big THANK YOU. My younger self was a little like Minerva: determined and persistent. I taught myself English at a young age, and I’m forever grateful to little Yamile for all the hard work. It’s paying off!

What is your writing process? What techniques do you use to get past writer’s block?

I wrote my first full novel during NaNoWriMo back in 2008. My goal was to win NaNo by writing 50,000 words in 24 days (I found out about National Novel Writing Month on November 6th, but I still reached my goal). Since then, I’ve learned to pour out my first draft on the page and then go back and revise. This has resulted in a lot of drafts that will never see the light of day, but it has also produced some powerful writing that came straight from my heart (like the NaNo in 2013, a few days after my mother passed away). I write every day, or at least, most days. Sometimes my ideas are born of a single word, or a person I see who makes me wonder about their lives. Sometimes the ideas simmer in my head and my heart for years, until I feel I ready to tell them. Right now I’m working on a story that was born about twelve years ago when I lived in Puerto Rico. I’ve learned that even if something I write isn’t ready for me to share with my critique group, it’s still an important piece of writing because it taught me what doesn’t work or what needs more depth. I love to do writing exercises from craft books like Writing Fiction by Janet Burroway et al, Steering the Craft, by Ursula Le Guin, and The Plot Whisperer, by Martha Alderson. Even if not all of these exercises end up in my manuscript, I often find wonderful information about my characters (or myself) that helps me tell the story better.

Recently, there’s been quite a lot of debate over the idea of readers who choose to take a break from books written by a certain group, such as white male authors. What’s your take on this?

First of all, I feel that people should read whatever they want to read without fear of mocking or teasing of any kind. I naturally gravitate toward books by authors of color because they tell stories that mirror my experience as a person of color too. As a child, I never remembered who wrote what. I loved Little Women and Heidi because I identified with Jo March and Heidi who lived with her grandpa. But as an adult and a writer, I want to learn from the masters how to tell the stories that inhabit my mind and my heart, and there’s no better way than to read their stories to know how to tell mine.

What are your favorite books or writers in the same genre as your manuscript?

I have hundreds of favorite books, but in middle grade I love everything by Katherine Paterson (Bridge to Terabithia is my favorite), Gary D. Schmidt (Okay for Now), Shannon Hale (Princess Academy), Kelly Barnhill (The Witch’s Boy. Wow!), and Erin Bow (Pain Kate). I also love everything by Meg Medina (especially The Girl Who Could Silence the Wind) and Julia Alvarez (the Tia Lola books are the best!), and of course Pam Muñoz Ryan (Esperanza Rising). But my favorite stories ever are fairy tales, from all over the world, and of course Peter Pan has a special place in my heart. 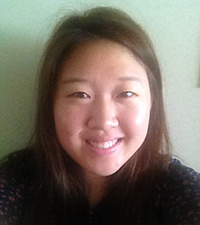 Tell us a little about the main character in your novel.

His name is Lee Jaewon (Koreans put their surnames before their given names). He’s 18-years-old. He’s a quiet, keep under the radar type of person, with a strong sense of loyalty and a distrust of hope. At the start of the book, he lives alone in a dingy apartment in Old Seoul (my future Korea is split between Old and Neo Seoul). He hasn’t spoken to his best friend in three years. He’s rejecting these mysterious envelopes full of cash, sent from his mother who he hasn’t seen since he was eight. I see him as a character with a very tired soul who longs to forgive everyone who’s hurt him in his life, yet doesn’t know how to begin, or even if it matters.

Physically, he looks like Lee Jong Suk. If you don’t know who that is, well, you’re in for a treat: Google him! (He’s a South Korean actor).

What advice would you give your younger self about writing?

You are fabulous! Keep on doing what you’re doing! Okay, maybe that’s not advice. More like ego-boosting. But every teenager needs a good ego-boost now and then, especially when writing, which is literally pouring your soul onto a page.

What is your writing process? What techniques do you use to get past writer’s block?

My writing process is pretty linear. I outline heavily, with scene-setting and dialogue for some significant scenes that will appear in the novel. I do character and worldbuilding charts. I compile pictures/illustrations of places and people who inhabit the spirit of my characters. Then I go through the whole book, from the first chapter to the last, with heavy editing in between. Then of course more revisions. The last two steps are printing the whole book out and attacking it with a bunch of colorful pens. The more colors the better! And then reading the whole book out loud while recording it. THEN I send it to my beta readers and critique partners – this is the point where I can’t make it any better by myself.

As for writer’s block, when I come up against that particular wall, I always start with the spark that made me want to write the book in the first place. The characters. I go back to the sketches I wrote of the characters and add onto them, delving deeper into their backgrounds and psyches. And/or I’ll re-read scenes I’ve already written that contain the “voice” of the characters, which makes me fall in love with the characters all over again. It’s all about making myself believe in the characters so that I want to finish their story.

Recently, there’s been quite a lot of debate over the idea of readers who choose to take a break from books written by a certain group, such as white male authors. What’s your take on this?

The idea behind this, I believe – at least for avoiding white, male authors specifically – is that by avoiding this group, you will therefore seek out stories written by women, people of color or LGBT writers, enriching your perspective of the world, which is always a viable and recommended thing to do.

As a reader, I seek out stories with strong coming-of-age themes and themes of love, in all its shapes and forms. When I read, it’s about seeking these types of books in an inclusive setting.

What are your favorite books or writers in the same genre as your manuscript, and why?

Tough one because I haven’t read enough YA Sci-Fi to have particular favorites. I watch a lot of Sci-Fi dramas and anime (which heavily influenced my novel), but I don’t particularly have favorite books that are in the YA Sci-Fi genre. For example, one of my favorite anime/manga franchises is the Gundam franchise, which deals with futuristic societies, technological advancements and very human themes of love, hate, honor and betrayal.

Recently, I read the first two books in Brandon Sanderson’s Reckoners series, which were pretty awesome – jam-packed with action and strong themes of what it means to be a hero.

On the opposite end of Sci-Fi, focusing more on character, I really love the quiet strength of Diana Peterfreund’s For Darkness Shows the Stars, a dystopic re-telling of Jane Austen’s Persuasion, taking place on a futuristic Pacific Islands.

Who We Are
Requesting Review Copies
Lee & Low Books
END_OF_DOCUMENT_TOKEN_TO_BE_REPLACED