Resident Literacy Expert Jill Eisenberg began her career teaching English as a Foreign Language to second through sixth graders in Taiwan as a Fulbright Fellow. She went on to become a literacy teacher for third grade in San Jose, CA as a Teach for America corps member. She is certified in Project Glad instruction to promote English language acquisition and academic achievement. In her column she offers teaching and literacy tips for educators.

In light of Thanksgiving coming, many teachers and syllabi touch upon Native American history. As the Common Core is front and center for teachers, parents, and districts as of late, we are tasked with equipping children to be “career and college ready.” This includes not only literacy and mathematics standards, but also a commitment to teaching children about the multicultural world they live in and the complex history that came before them.

One unit that I initially was intimidated to teach was about the local Native American tribes of the Bay Area. We had wrapped up the science unit on the solar system and were changing gears for a history unit about the local Bay Area tribes. I felt significantly less confident teaching about the history of the local Native American tribes because there is more complexity, more nuance, and more sensitivity needed in investigating and appreciating groups of people, traditions, and cultures…than, well, planets.

In my search for resources to teach my students about these tribes, I knew that I would have to tread carefully on the images and sources I used. Already by third grade, my students had begun to see Native Americans as a homogeneous group of people with one look, one culture, and one history. Quite a few of my students had Native American heritages from Central Mexico, but struggled to disentangle the stereotypes from their own experiences. Like many educators and families, I would have to teach my students that the tribes we were studying are unique from other tribes in the Unite States and also demonstrate that Native American peoples weren’t just “were,” but also “are.” Additionally, I needed to find a balance for students to learn about the history, diversity in storytelling, and traditions of these tribes through legends and myths, while also finding sources that showed Native Americans in more recent times, not just frozen in a rigid, simplistic time capsule. 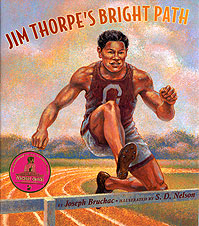 Finding contemporary tales proved challenging, yet immensely rewarding. I struggled to find specifically local contemporary stories for my third-grade unit; however, I selected Lee & Low’s Jim Thorpe’s Bright Path and Puffin Chapters’ Eagle Song both by Joseph Bruchac. Each of these coming-of-age stories was powerful in prompting discussions around bullying, loneliness, and respect, which are subjects all students grapple with and confront. We compared these stories with several of the myths and legends we read to evaluate the depiction of Native Americans. For an interview with Joseph Bruchac and his insights on Native American stereotypes in children’s literature, check out Learning First Alliance’s interview.

Killer of Enemies imagines the place Native Americans will have in the future.

For more inquiry- and project-based learning in the classroom, you can challenge your students to research several tribes in Utah, Washington, and New Mexico. Scholastic Explorers partnered with Earthwatch Institute to provide students the opportunity to “visit” field sites in order to study ancient and modern-day cultures.

Whether your curriculum map has a distinct unit for Native American history or specific holidays inspire you to expose your students to a new culture, consider meshing multiple time periods and narratives to broaden your students’ perceptions of what it means to be Native American.

Classroom lessons from the National Museum of the American Indian

4 thoughts on “Filling in More of the Story: Modern-Day Narratives of Native Americans”

Who We Are
Requesting Review Copies
Lee & Low Books
END_OF_DOCUMENT_TOKEN_TO_BE_REPLACED