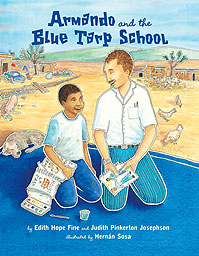 Click below to listen to a clip from the duet “Someday, Maybe”

The versatile cast sang, acted, and moved on stage with palpable energy and enthusiasm. Two played guitar, including Gordo, who quipped, “How many rats do you know who can play the guitar?” Through many weeks of rehearsals, all the actors nailed their performances with extraordinary stage presence. They were, in a word, stupendous. They earned a spontaneous standing ovation at the end of the performance.

Here’s the story. Our Armando book grew into a musical by mistake! It all began with a wrong phone number.

A local reporter needed input on a piece about theater in North San Diego County where we both live. When she called playwright Pat Lydersen by accident, the reporter told her, “Hey, you should write a play about Edith and Judith’s book about David Lynch!” The plays of Pat Lydersen and composer Wendy Woolf, talented theater pros, are designed to provide young audiences with their first taste of live theatre. For twenty plus years, their Park Dale Players have been a fixture in North County.

In the spring of 2009, we met with Pat, Wendy, and David to hear the words and songs that Pat and Wendy had been living with for months. They read us the script, and Wendy sang the songs with guitar accompaniment. We were astounded. Then David Lynch told us all stories about his work, inspiring Pat to add details to her script. On the spot, David invited them to perform excerpts from the play at Responsibility’s fall fundraiser.

Previously Pat had written comedy. Her one-liners make audiences laugh out loud. With the more serious tone of Armando, Pat turned to Shakespeare’s trick of injecting comic relief by creating the characters of Gordo, Flaco, and Gull, who don’t appear in our book. As Pat says, “Gordo is a fat little rat with a very high opinion of himself. Flaco is his long suffering friend, and Gull is not the brightest of seagulls cruising the skies.”

Like our book, the play includes Spanish words. In writing the song lyrics, Pat notes, “Spanish is a much more musical language than English, so I sprinkled in words such as pepenadores (trash pickers), la vaca (cow), fuego and incendio (fire), escuela (school), and niños y niñas (boys and girls). It’s a lot easier to find rhymes in a language that ends in so many o’s and a’s! In my forty years of doing theater, I’ve never been as excited as I am about this production,” say Pat.

Soon Pat’s lyrics were dancing in composer and musical director Wendy Woolf’s brain. She says, “I was mesmerized by the story and project. I wanted a Mexican flavor for some of the songs, so I wrote several on the guitar, using Latin rhythms as much as possible.” Soon Wendy was creating the tunes 24/7. “I’d wake up in the middle of the night hearing melodies, hop out of bed, and run to the piano or my guitar to play the tunes as I heard them in my head.”

In January 2010, Pat and Wendy will start production of the full-length play. With a cast of twenty young actors, the world premiere will take place over four days at a local elementary school in March 2010. This will be a fitting celebration of David Lynch’s thirty years working with the eager youngsters of the Tijuana dump. All proceeds will go to Responsibility, David’s nonprofit organization.

We’re so proud of Pat and Wendy’s ingenious creation. We appreciate how they built on our book and rounded out the story with heart-warming, humorous touches. These two have donated all their time to this effort, along with absorbing production costs, such as building a large stage for the show.

David Lynch’s life-changing work has been an inspiration, demonstrating that one person truly can make a difference! All of us—authors, playwright, composer, actors, and their gracious parents—have been captivated by his inspiring story. One actor said, “It’s a fascinating story with an important message. I feel lucky to be a storyteller.” Another said, “Being in this play makes me feel fortunate for what I have.” And a third said, “It’s been an honor to take part in this event. The music is beautifully written and so [much] fun to sing.”

What a collaboration! As Gordo would say, the whole experience has been “muy delicioso.”

Thanks to an actor’s dad, you can view the preview of the full musical Armando and the Blue Tarp School in three parts on YouTube. How cool is that? Watch the three parts here, here, and here. We’d love your reaction, so watch the play, then add comments.

Directors of youth theatre groups around the country will be excited to know the script, rehearsal CD, and a copy of our Armando book will be available later. Spread the word!

Thanks, Edith and Judith!

Listen to a radio interview with Edith Hope Fine and Pat Lydersen, the playwright.

Armando and the Blue Tarp School.

3 thoughts on “Armando and the Blue Tarp School Hits the Stage!”

Who We Are
Requesting Review Copies
Lee & Low Books
END_OF_DOCUMENT_TOKEN_TO_BE_REPLACED