We have a bell on the wall in the office. It’s the good-news bell; whenever we get a starred review, an award, or a really big order, the bell is rung, the staff gathers around it, and the news is announced to the office.

Jason, as publisher, is the first to know when we get starred reviews: the relevant journal emails him the news. My first inkling comes when Jason sidles up to Hannah’s desk—right next to mine—and mutters something along the lines of, “Check your email. I forwarded something from Booklist.” After a pause long enough for the email to download and open, Hannah says, “oooh!” She then gets up and walks in the direction of the bell, Jason following surreptitiously two steps behind. That’s the point at which I know I’d better slip my feet into my shoes—I tend to kick them off under my desk—and get ready to gather around the bell for the good news. 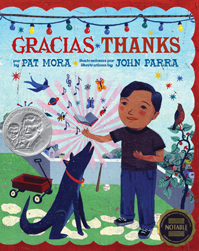 I tell you this because today started with a Bellringer: Another starred review for Gracias • Thanks, from Booklist!

Gracias, Booklist! Booklist, thank you! It’s great to see everyone getting as excited about this book as we are. The review rightly points out the remarkable “childlike imagination and fresh imagery” and that “books of thanks can run toward clichés, but the originality and liveliness of language and art in this one will inspire children to consider their own blessings.” For example, my favorite blessing from the book:

For my little brother, who threw mashed peas at my sister and made me laugh so hard I fell off my chair, thanks.”

Now that’s the kind of thing I’m thankful for. That, and a Bellringer to start Friday off right.

Who We Are
Requesting Review Copies
Lee & Low Books
END_OF_DOCUMENT_TOKEN_TO_BE_REPLACED