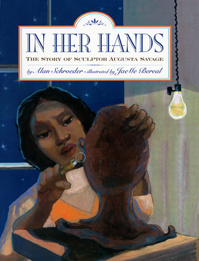 We’re starting up a new feature on the blog: A Book a Day. The third week of every month, we’ll pick a theme, and each day (Monday-Friday) one of us will talk about one of our books that fits into the theme.

So, to inaugurate the feature, I bring you the first book of our Back to School theme: In Her Hands: The Story of Sculptor Augusta Savage.

It seems fitting that we should start a brand-new feature on a brand-new blog by talking about the beginning of the school year. Each new year, new school, new class is a new beginning, building on where you’ve been but taking you someplace different. Take, for instance, Augusta Savage. Ceramics and sculpture were always a part of her life; from a very young age, she made little clay figures out of the clay she found in her back yard. Her father didn’t approve and money was tight, so she practiced her art quietly as she grew up, got married, had a daughter, and was widowed. It wasn’t until she was twenty-seven that she went to art school and became a professional artist.

A lot of the time, we think of school as something for the young—that kids and young adults get their schooling, one year after another, and then get a final degree and move out into the real world. Augusta Savage didn’t follow that straight and simple path: instead, as an adult she had the courage to pick up, leave the life in Florida that was all she knew, and go to New York City with little more than the five dollars in her pocket. At thirty-five, she picked up again and went to Paris for another round of art school. It takes a lot of courage for a five-year-old to walk away from her mother and go into the big, scary school building for the first time, but it takes much more for a grown woman to go back to school. Augusta taught pottery to her classmates as a teenager; as an adult she admitted that she had much more to learn and the teacher became a student. It was what she needed to do to perfect her art.

As we get older, we acquire more and more reasons not to make a new start – jobs, homes, families, comfortable routines. We expect kids to start anew every fall when they walk into a new classroom, but we lose the flexibility to do it ourselves. We don’t all need to move hundreds of miles, but maybe this year we can all take a leap, acknowledge that we don’t know everything, and do something new.

Who We Are
Requesting Review Copies
Lee & Low Books
END_OF_DOCUMENT_TOKEN_TO_BE_REPLACED