Did you know that American Indians and Alaska Natives serve in the military at five times the national average and have the highest per capita involvement than any other US population? (NICOA, USO). As a book editor, when I have the privilege of receiving a new manuscript that features modern Indigenous characters, I can usually find at least one character in the book who has served or is serving in the military. This is not surprising! Military service within our communities is par for the course — a big part of our living culture. When those in the service return home, they are not just returning home to the US but also to our own sovereign Native Nations. Military service is a big deal. 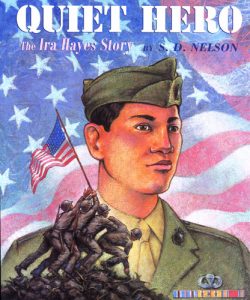 stepfather’s father/my grandfather (Abenaki–navy WWII), and my great aunt (Abenaki–marines WWII), all served. My grandfather’s entire family is buried in the Abenaki cemetery in Maine, but he elected to have his ashes dispersed in the Pacific Ocean where he spent the majority of his service. He was in the first group of Navy Seals. In the last part of his military service in WWII, he was sent to deactivate a set of bombs placed underneath the side of a ship. As he was doing his work, one of the bombs exploded, sending him straight out of the water and into the sky. He miraculously survived and soon retired with honors from service.

If you’ve ever attended a pow-wow, you will see what we call the Grand Entry. This is when all the dancers enter the circle led by veterans and head dancers, and it usually begins with a prayer. During the pandemic, I was unable to attend my yearly powwow back in Oklahoma for our Cherokee National Holiday. If I’d been there, I would have arrived super early to not only get a good seat, but to hear the prayer and see the grand entry. Instead, over the past couple of years, I’ve spent a lot of time online, watching powwows and listening to the drums. In one video, I was moved to hear how a Nakota elder had said that one year, as they greeted a WWI veteran back into their community, they did so with horses and dancing. This was so that the horse nation could lessen the warriors’ burdens — those they carried still in their minds. I thought about my Navy Seal grandfather a lot when I heard this story. He may have survived that bomb, but the war still left its mark. 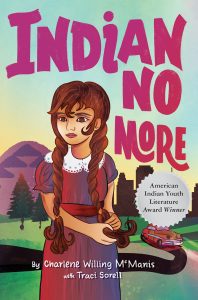 So now you can probably see why I mentioned earlier that as an editor, I’m not surprised to see veteran characters within modern Indigenous stories. When the middle grade novel Indian No More written by Charlene Willing McManis with Traci Sorell arrived to our New Visions Award contest, we were greeted by veterans. Charlene (Umpqua–navy) had served in the military along with her father and other members of her family. In her novel, the father and the uncle are both veterans. Another book, Quiet Hero: The Ira Hayes Story, illuminates the life of Ira Hayes, who joined the Marine Corp and was known as one of the six soldiers to raise the United States flag on Iwo Jima during World War II — an event immortalized by Joe Rosenthal’s Pulitzer Prize-winning photograph. In my own middle grade novel, Hedge Over Heels, which will be out next year with Scholastic, I have a Cherokee military family who is instrumental in helping my protagonist find her footing in a new town, having moved multiple times with a mom in the army.

Readers will probably find many veterans and their families within Indigenous stories—they are that much a part of our history and current culture. I encourage kids to read these books! But on this Veterans Day, you do not have to look for a book to find us. We’re still here, protecting, serving, and honoring our nations.

Indian No More by Charlene Willing McManis with Traci Sorell
Quiet Hero: The Ira Hayes Story
by S. D. Nelson
From USO: A History of Military Service: Native Americans in the US Military Yesterday and Today
From Smithsonian Magazine: Native American Veterans Receive a Place of Their Own to Reflect and to Heal
From YouTube: Special Military Homecoming – includes special acknowledgements to active duty veterans and those returning home
From YouTube: Grand Entry at Veterans Powwow

Elise McMullen-Ciotti is a children’s book editor and an author, as well as a food scholar with NYU Steinhardt’s Food Studies master’s program. She has worked in children’s book publishing since 2012 and with Tu Books since 2017. Originally from Texas, she is a proud member of the Cherokee Nation and spent large amounts of her childhood in Oklahoma with her Cherokee grandmother. Before her career in publishing, Elise worked in food, television, and then food in television. She lives in New York City with her husband, a large personal library, and an open kitchen. You can find her at elisemcmullenciotti.com.

One thought on “Honoring Indigenous Stories on Veterans Day”

Who We Are
Requesting Review Copies
Lee & Low Books
END_OF_DOCUMENT_TOKEN_TO_BE_REPLACED