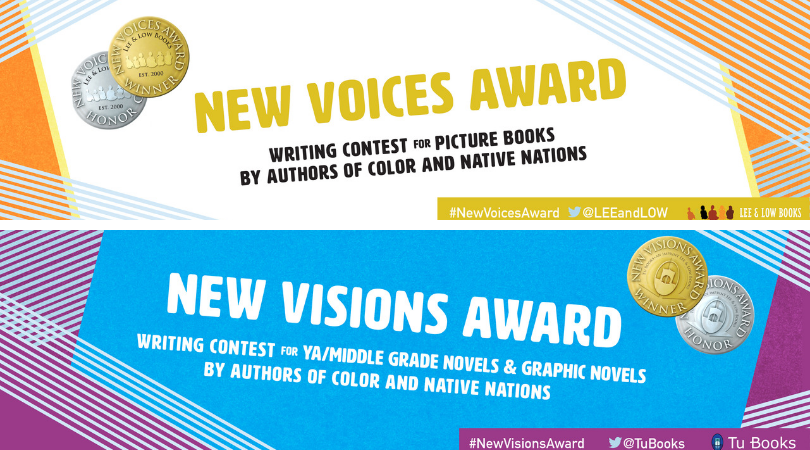 Do you or someone you know write for young readers? Are you an author of color or Native author hoping to break in to the publishing industry for the first time? Submissions for our twentieth annual New Voices Award and our seventh annual New Visions Award are now open! Don’t miss this terrific opportunity to have your work considered for publication by Lee & Low Books.

The New Voices Award and the New Visions Award encourage writers of color and Native nations to submit their work to Lee & Low Books, a publisher that takes pride in nurturing new talent. Winners of each award receive a $2,000 cash prize and a first time publishing contract with Lee & Low Books.

Past New Voices Award submissions we have published include The Blue Roses, winner of the Paterson Prize for Books for Young People; Sixteen Years in Sixteen Seconds: The Sammy Lee Story, a Texas Bluebonnet Masterlist selection; and It Jes’ Happened: When Bill Traylor Started to Draw, winner of the Ezra Jack Keats New Writer Award Honor; and many more. Winning New Visions submissions include Ink and Ashes by Valynne Maetani, the recipient of an honor award from the Asian/Pacific American Librarians Association; Rebel Seoul by Axie Oh, which received three starred reviews and was a Junior Library Guild selection; and Ahimsa by Supriya Kelkar, which received two starred reviews and was listed as a Notable Social Studies Trade Book for Young People.

Happy writing to you all and best of luck!

Who We Are
Requesting Review Copies
Lee & Low Books
END_OF_DOCUMENT_TOKEN_TO_BE_REPLACED