Today is the official release of Under My Hijab, the new picture book written by Hena Khan and illustrated by Aaliya Jaleel. With cheerful rhyming text and charming illustrations, Under My Hijab provides a friendly introduction to hijabs for all readers, and celebrates the many Muslim women and girls who choose to wear them. 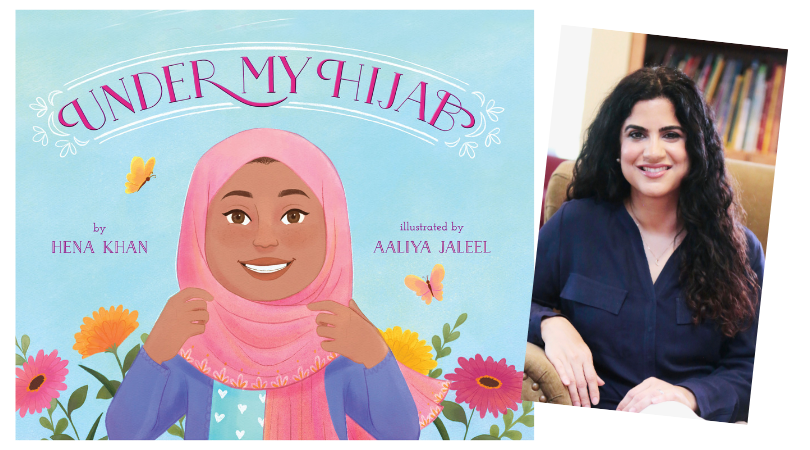 To celebrate the book’s release, we asked author Hena Khan to answer a few frequently asked questions about the book and the hijab in general:

Why did you choose to write a book about the hijab?

I have family members and friends who wear the hijab who I respect and admire, and I know they face a lot of questions about it. These range from the most innocent questions from young children, like “do you have hair?” and “do you have ears?” to practical queries like “do you sleep in that?” or “how do you shower?” to unsolicited scrutiny and commentary. I wanted to write a book that celebrates the women I know who choose to wear hijab, and presents them as they are: strong, independent, educated, successful, and fashionable individuals who are talented in a multitude of ways and not limited by their headcovers. I hoped it would serve to answer very basic questions as well as to represent women and girls who wear it and aren’t very visible in children’s literature.

Does your book promote the wearing of the hijab?

Not at all! As a Muslim woman who does not wear the hijab myself, I’m not really in a position to promote it! Nor was that my intention in writing this book. The book merely represents the women and older girls who do wear it with elegance and dignity. None of my picture books that share Islamic traditions or culture are designed to proselytize or tell anyone how to practice their religion. Rather they serve as a mirror for readers who share in the faith and its traditions, and as a window into a culture that may be new or unfamiliar to those who are outside of it and are curious to learn more.

Do all Muslim women wear the hijab?

No, although I was surprised to learn recently that some people think all Muslim women do wear the hijab. In other countries in the world, even Muslim-majority countries where it is is more commonly worn than here in the US, not all women choose to wear it. The choice is based on the interpretation of religious texts, and the passages pertaining to covering one’s body and modesty. As with many religious practices, a range of interpretations and personal preferences has evolved over the centuries. And as demonstrated in this book, there are many different styles and manners in which to wear the hijab, which relate to culture, fashion, and personal taste, among other factors.

When do girls typically start wearing the hijab?

Generally speaking, girls who plan to wear the hijab as part of their religious observance will wear it regularly around adolescence. They may practice wearing it at a younger age, as part of a uniform or in certain settings, like during religious instruction for example. However, women may choose to start wearing the hijab at any point in their lives, even as grown adults. And some have chosen to stop wearing it, too. I also know women who try to wear it most of the time but not all the time, and other variations.

Why do women wear the hijab?

Learn more and get a copy of Under My Hijab here.

One thought on “An Interview with Hena Khan, Author of ‘Under My Hijab’”

Who We Are
Requesting Review Copies
Lee & Low Books
END_OF_DOCUMENT_TOKEN_TO_BE_REPLACED