This month, Lee & Low Books will mark the 25th anniversary of its 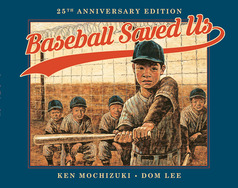 first book release, Baseball Saved Us by Ken Mochizuki and illustrated by Dom Lee. With over half a million copies sold, this groundbreaking picture book about a young boy playing baseball in a Japanese American Internment Camp continues to be one of the company’s most popular and bestselling books.

Baseball Saved Us was inspired by a newspaper article that Lee & Low co-founder Philip Lee sent to journalist Ken Mochizuki shortly after the company began. Encouraged by Lee, Mochizuki turned the article into his children’s book debut—and Lee & Low’s company debut. The book was released in 1993 to wide acclaim, including a New York Times full page review.

The success of Baseball Saved Us continues to play a crucial role in shaping our publishing program today. “From an editorial standpoint, it set a bar for us and for the industry of what stories could be told to children,” said Lee & Low Books Publisher Jason Low.

“Despite being published 25 years ago, the subject matter is very much relevant to current events happening in today’s world,” said Lee & Low Books President Craig Low. “The kids who read this book growing up will recognize as adults the themes of injustice, discrimination, and mass incarceration playing out in real time and will hopefully be moved to do something.”

Here’s what others say about this groundbreaking book:
“Baseball Saved Us was groundbreaking for its honesty when it was first published twenty-five years ago, and is just as fresh—and important—today.”
—Kathleen T. Horning, Director, Cooperative Children’s Book Center at the University of Wisconsin

“Twenty-five years on, the ball keeps on flying through the darkening skies over the world.”
—Allen Say, Caldecott Medal-winning author and illustrator

Baseball Saved Us is out today a special 25th anniversary hardcover edition with an updated author note.

Did you grow up reading Baseball Saved Us? Is it one of your classroom staples? Let us know how you’ve used it in the comments below!

Who We Are
Requesting Review Copies
Lee & Low Books
END_OF_DOCUMENT_TOKEN_TO_BE_REPLACED