Today we are pleased to welcome two fabulous authors to our blog, Cynthia Leitich Smith and Uma Krishnaswami, for a discussion about writing and reading humor. Welcome, Cynthia and Uma! 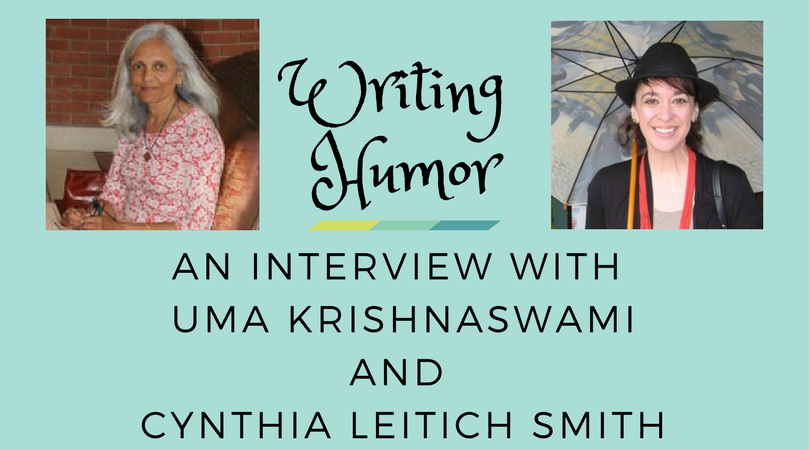 Why are you drawn to humor as a reader? As a writer?

Uma: I was drawn to humor as a listener long before I learned to read. My father used to tell tall tales from the storytelling tradition of South India–stories of a king befuddled by the daily headaches of administering his kingdom and a minister whose wisdom was often masked in a kind of self-deprecating wit. The stories contained puns, role reversals, exaggeration, repetition, and surprise. They made me laugh out loud and they got better with every telling.So, when I began to read, funny stories became special treats for me. I discovered my grandfather’s P. G. Wodehouse collection at the age of eleven and was at once enchanted by their amiable lunacy. I was at the age when laughter comes easily so Plum’s immortal farces were a gift. Later I discovered the work of R. K. Narayan, with a lower-key humor that reveals a genuine affection for the fictional small-town India setting. I didn’t think of writing humorous books for quite a while. It takes a certain confidence in your own voice and maybe I didn’t have that yet. But the more I wrote, the more I found myself resorting to humor in plot and characterization, or as an element of cultural context. It feels quite natural now. It feels necessary. Cynthia: My childhood was blessed with laughter, but as a young reader, I tended to navigate more to the fantastical than the humorous. I don’t recall finding much intersection between the two.In my own writing, though, I’m certainly predisposed to that combination. And humor sneaks into my realistic fiction, too. Occasionally, I’ll craft a more universally funny situation, but I tend more toward conversational humor—in dialogue and first-person narratives—as well as slowly building ridiculous humor.One of my most popular characters is Clyde, who has one biological parent who’s a wereopossum and one who’s a werelion. There’s a 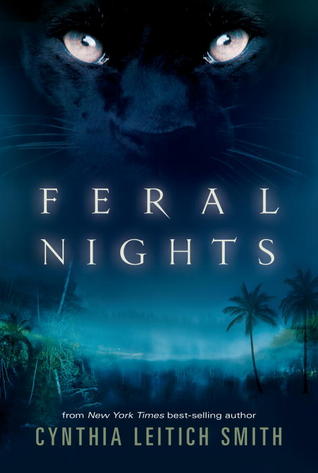 long character journey in Feral Nights to his connecting with his inner lion, but it’s the lessons learned from his opossum form and culture that ultimately save the day.That’s ridiculous, and it could be brushed aside as such. But because the character is three-dimensional, likeably flawed and long suffering, teen readers overwhelmingly responded by laughing and cheering at the same time. That’s entertainment. And it underscores a self-acceptance theme, too.I’ve been influenced by Annette Curtis Klause, David Lubar, and Marti Noxon’s writing. They helped show me how humor can make the difference between drama and melodrama, enhancing the pacing of dialogue and scenes, giving the reader an opportunity to connect and to breathe. Joe Bruchac’s fiction also has a low-key, Indigenous humor that shines through, especially in quiet moments.How hard is it to write humor well? Can you share a particular example from one of your books that challenged you or took some time to get right?Uma: I found it easy to get the funny bits written in Book Uncle and Me because the first person voice of the main character was observant and quite self-aware, so she could see the humor even in tough situations and comment on it in her own sometimes naive but very direct way. It was harder to be funny in Step Up to the Plate, Maria Singh because the story was so much more complicated and there was so much historical context and conflict. I had to work hard to make sure the book didn’t get overly earnest. It helped to develop secondary characters— the little brother Emilio helps to provide humor in places, as does one of the women in the community, the burdened and sometimes burdensome Doña Elena.Cynthia: My chapter book Indian Shoes is about a Cherokee-Seminole grandson and his grandfather, who live together in the city of Chicago and journey home to tribal town Oklahoma.One of my goals had been an everyday life story, and of course that would mean a certain amount of humor. Gentle humor, especially given the young age of Ray, the child character.But the story felt uneven and the laughs weren’t coming.There’s a convention in children’s literature that it’s—and appropriately so—child centric. The character agency should come from the young protagonist. That’s typically who’s driving the story.
But that’s one thing in a single narrative, another in a collection of six. If Ray was always the hero, his grandfather and primary caretaker would appear to be ineffectual.Reframing them as co-protagonists did the trick, and evening out their prominence in the book allowed for a more intergenerational sensibility that was conducive to lighter moments.Great humor is often both culturally specific and universal. What are some of the challenges that come with creating humor that is based in a culture?Uma: Historically, literature written in English typically had a relatively homogenous readership in mind, so it was fine to write stories for white kids, about, you know, brown kids. And mostly they were written by writers outside the culture or cultures in the book. I think the challenge in writing today is that whoever you are, whatever your ethnic or cultural background, you have to cast the widest net for your audience. There’s no telling who will read your book. We also live in a highly polarized world, a dangerous world and a world in which people are really pretty awful to one another. So I think it’s important as a children’s writer to lean toward kindness in my own heart. I try to write humor that nods to readers in the know and at the same time invites others in.There is another kind of humor as well, of course—cruel or condescending jokes. If you have a good reason for showing that kind of humor, if the story needs it, then of course you must use it. 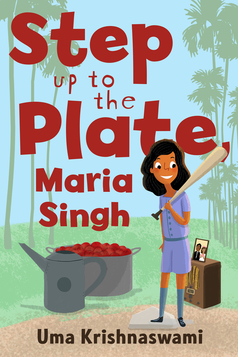 For example, you can certainly have characters employ it, for a purpose. I have a secondary character in my historical novel, Step Up to the Plate, Maria Singh, who laughs at others and looks down on them. But my author’s stance has to be clear in the text, relative to such storylines in fiction.Cynthia: Cross-cultural humor can be challenging. John Vorhaus says comedy is “truth plus pain.” Carol Burnett has quoted her mother saying, ‘comedy is tragedy plus time.”But for the humor to resonate, there must be agreement on that truth, on what is tragedy, and perspectives differ. Not always because of point of view, disagreement, but simply familiarity. Keep in mind: If you have to explain a joke, you’ve probably killed it.
Uma: So true! And explaining too much about culture can also yank you out of the story, so that can be doubly tricky.Cynthia: Absolutely. When I wrote my debut novel, Rain Is Not My Indian Name, I worried about not explaining enough, explaining too much. I recall when the book first came out that several Native people commented that parts were hilarious whereas many non-Indians clearly didn’t catch all of that.What I ultimately decided is that all a writer can do is bring half of the story circle. Each reader will complete it, informed by their own experiences and sensibilities. It will be a slightly different vicarious experience for every one of them. This is true for any story but perhaps truer for those who read cross-culturally.What I finally decided is that it’s okay if not everyone gets every joke, so long as the story is still compelling and resonant to them on some level.What role can humor play in building empathy or understanding 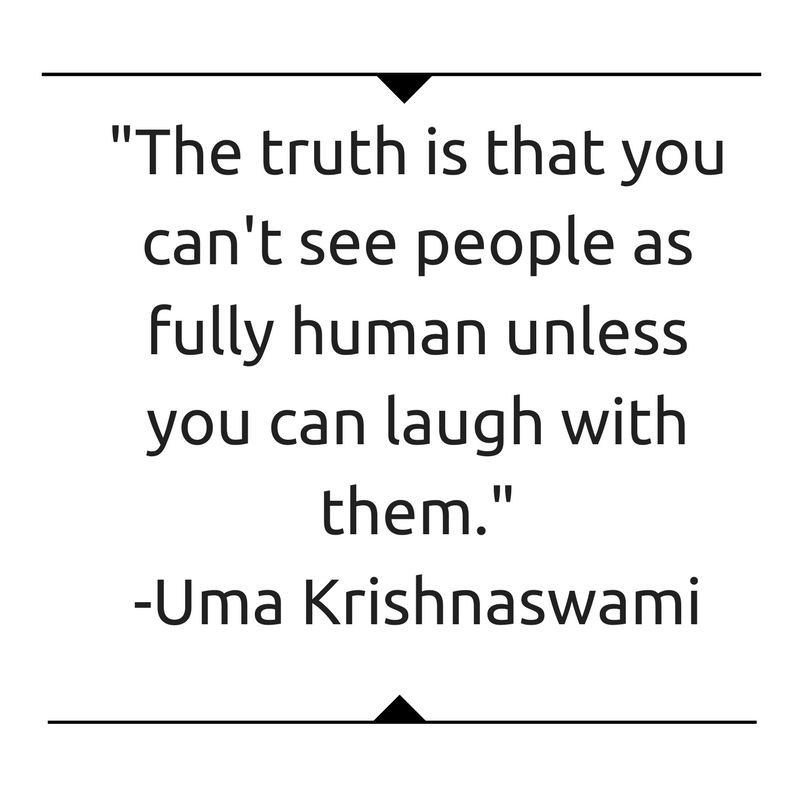 between people?Uma: Humor makes us lower our guards. And the truth is that you can’t see people as fully human unless you can laugh with them. Humor can subvert and question issues of identity and belonging, for example, or reverse roles in ways that make the reader think. And by coming at realistic issues in an indirect way, it can make us more willing to step into another’s shoes. If we can laugh along with characters who are facing certain odds, we can then bear to go on the fictional journey with them rather than ending the story feeling merely pity.The capacity to laugh is an integral part of being human, so it belongs in books for young readers who are still shaping their sense of the world.Cynthia: We want to laugh. It’s not only healthy emotionally, it has physiological benefits (reducing stress, boosting endorphins and immunity). We’re predisposed to it and seek it out.Sharing laughter helps to create community—simply reminding each other of a funny moment can bring people closer again or even help facilitate a reconciliation.When two people find something funny, they’ve established a connection. Hopefully, a bridge that they can stand on together.What Uma says about laughter being part and parcel of the human experience… It reduces Othering. It’s tougher to dismiss or marginalize someone after you’ve laughed together.Who do you think are some of the funniest authors writing MG/YA today?Cynthia: Libba Bray, Jennifer L. Holm, Michelle Knudsen, Stephanie Perkins, Olugbemisola Rhuday-Perkovich, Lisa Yee, and of course Uma Krishnaswami.Uma: All of the above and a few more: Firoozeh Dumas, Erin Estrada Kelly, Rita Williams-Garcia, and yes, of course, Cynthia Leitich SmithCynthia: Oh, count me in for Rita Williams-Garcia, too!Uma and Cynthia: Thank you, Lee & Low, for giving us room and time on your terrific blog! 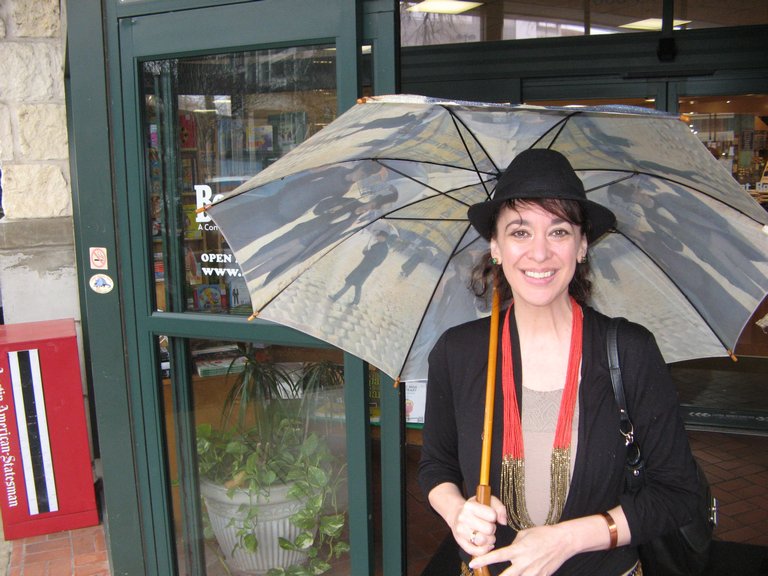 Cynthia Leitich Smith is a bestselling, award-winning children’s-YA author. Her books include the Tantalize series, the Feral series, Jingle Dancer, Indian Shoes and Rain Is Not My Indian Name, for which she was named a Writer of the Year by Wordcraft Circle of Native Writers and Storytellers. Cynthia also is a faculty member at the MFA program in Writing for Children and Young Adults at Vermont College of Fine Arts. She serves on the board of We Need Diverse Books and is a citizen of the Muscogee (Creek) Nation. Visit her online at cynthialeitichsmith.com. 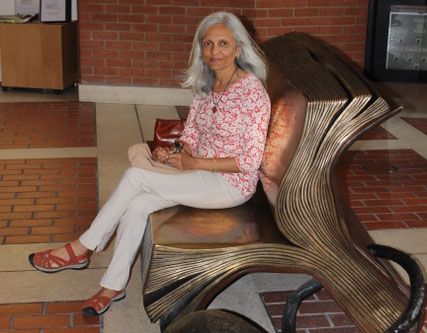 Uma Krishnaswami is the author of more than twenty books for young readers. She teaches in the low-residency MFA program in Writing for Children and Young Adults, Vermont College of Fine Arts. Born in New Delhi, India, Krishnaswami now lives and writes in Victoria, British Columbia, Canada. Visit her online at umakrishnaswami.org.

Who We Are
Requesting Review Copies
Lee & Low Books
END_OF_DOCUMENT_TOKEN_TO_BE_REPLACED