In today’s guest post, author Supriya Kelkar shares a behind-the-scenes look at the research required to write her new novel, Ahimsa—and a few neat things she learned along the way! Ahimsa was released this week and has received starred reviews from School Library Journal and Booklist, which called it a “heartbreakingly charming debut about the universal struggle of overcoming fears and biases in order to make the world a better place.”

Take it away, Supriya! 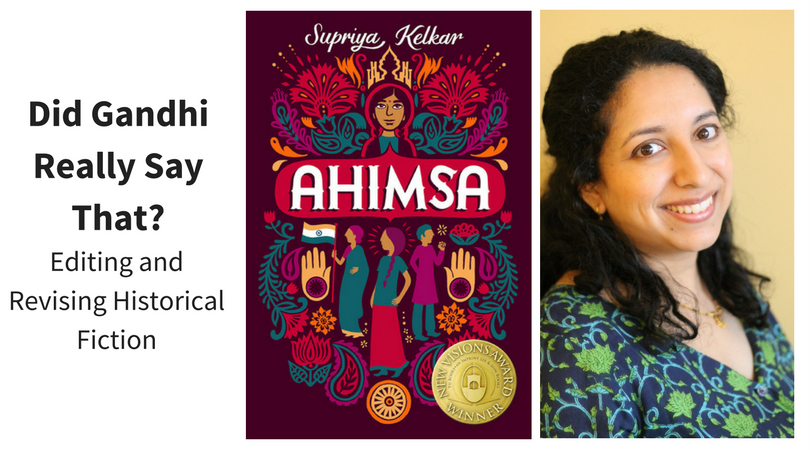 As an undergrad working on Gandhi Day of Service, a day of community service that takes place near Mahatma Gandhi’s birthday at colleges across the country, I first heard his famous quote, “Be the change you wish to see in the world.” They were such stirring words, they stuck with me for years after I graduated. What an empowering statement. What an inspirational way to live your life.

So, when I started writing Ahimsa, shortly after graduating from college, I made sure to include those words in the book.

But as I found out before we went to press, while going through my copy edit and double checking all my facts, it turned out there is no record of Gandhi ever saying “Be the change.” What he is actually on record as saying is “If we could change ourselves, the tendencies in the world would also change. As a man changes his own nature, so does the attitude of the world change towards him…We need not wait to see what others do.”

I was shocked. I had checked and double-checked fact after fact in my book over the years, from the historical dates and events to the minutiae, like what kind of metal the vessels Anjali’s family uses would be made out of in 1942. I had referenced an academic website on Dr. Ambedkar, Mahatma Gandhi’s biography, my great-grandmother’s biography, spoken to a professor, talked to relatives who were alive in the 1940s, and checked things over with my great-aunt, my great-grandmother’s daughter. After all my research, a misattributed quote had ended up in my book and stayed there for fourteen years of drafts?

Not only that, I soon learned that the other famous Gandhi quote I had referenced in my book, “An eye for an eye will leave the whole world blind,” may have been said by a reporter instead of Gandhi to emphasize the point Gandhi was making.

It took me lots of researching, sifting through dozens of websites full of inaccurate information, before I found an actual quote to use in the book. It just goes to show how important the editing process is when writing historical fiction, because with each stage of editing, I was able to flesh out the world of Ahimsa in greater detail, while also making the novel as true to the time as possible.

In the developmental edit, my editor, Stacy Whitman, asked me to dig deeper into Mohan, the Dalit boy Anjali befriends, and Keshavji, the Dalit freedom fighter Anjali’s mother follows. I did a lot more research on Dr. Ambedkar, the famous Dalit leader, and was able to bring more of the complexity of Gandhi out, showing that his actions were not liked by all and were not seen as fair by all the Indian people of different castes and religions.

In the line edit, while analyzing my use of language in detail, I was able to focus on lines and check their accuracy. For instance, because I set Anjali’s bungalow in my father’s childhood bungalow in India, I always envisioned Ma and Jamuna cooking while standing at a stove. But it turned out that in 1942, stoves were actually on the ground in India.

In the copy edit, I had written a scene where Ma is translating Gandhi’s speech for Chachaji because his English isn’t that good. My copy editor asked me to make it clear from the beginning that the speech was in English because she had assumed it would have been in Hindi. I knew that speech was in English. After all, I had read it in English. But just to make sure, I started to look more into that particular speech but could find no audio of it.

Still fairly certain the speech was in English, I spoke to a professor of Indian history and did some more research and it turned out, the speech was actually given in Hindi. All the English versions I had read were actually the translation of the speech. That prompted me to look into Gandhi’s “be the change” and “eye for an eye” quotes as well, and that is when I found out the quotes were not correct.

After all the editing and research, and all the new knowledge I have gained from the process, I now have new inspirational words to live by as a writer, whether writing historical fiction or another genre, whether on my first draft or my fourteenth year of revisions: Be the change and be open to change, because you never know how changing a character, or a writing style, or your sentence structure can help you change other parts of your novel for the better.

One thought on “Did Gandhi Really Say ‘Be the Change’?: Editing Historical Fiction”

Who We Are
Requesting Review Copies
Lee & Low Books
END_OF_DOCUMENT_TOKEN_TO_BE_REPLACED