In this guest post, originally posted at EdWeek and reposted here with permission, Philadelphia-based teacher Kathleen Melville shares the “Where’s My Story” project she developed to teach her ninth-grade students about diversity—or the lack thereof—in children’s books. 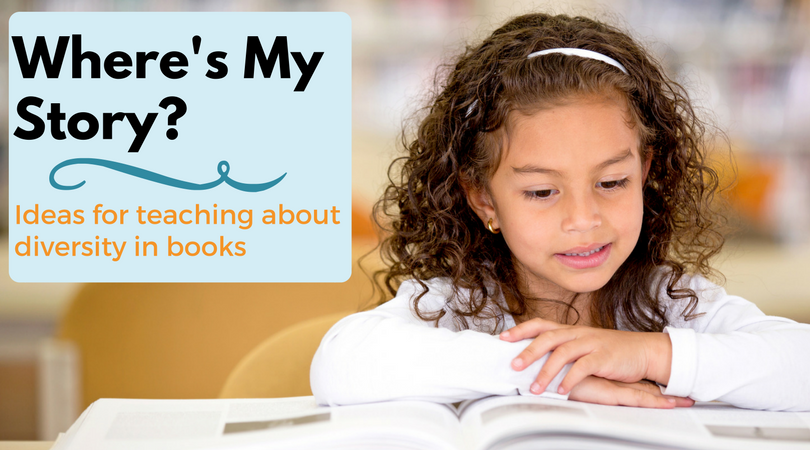 When I met my students on their first day of high school, most of them were not readers. They knew how to read, but they thought of reading as teacher-mandated drudgery. Some of their indifference to the written word could be attributed to the drill-and-test regimen common in urban elementary schools. After nine years as students in these schools, my students are very familiar with isolated “passages” and multiple-choice comprehension questions and much less acquainted with books that inspire curiosity or reflect their experiences.

But the problem extends beyond school policy and begins before kindergarten; the lack of children’s literature that is representative of urban children, people of color, and the wide diversity of society is well-documented. And it means that most of my students have come to know books as largely irrelevant to their lives. Nigerian novelist Chimamanda Ngozi Adichie describes this phenomenon in her TED Talk, “The Danger of a Single Story”: “Because all I had read were books in which characters were foreign, I had become convinced that books by their very nature had to have foreigners in them and had to be about things with which I could not personally identify.”

For my students as learners and for me as their teacher, this is an important problem. And because my school’s project-based curriculum revolves around addressing real-world problems, we tackled it by seeking out culturally relevant children’s books, writing books of our own, and sharing them with 1st graders at a local elementary school.

We began the “Where’s My Story?” project by working to understand the problem. In pairs, students discussed their early experiences of reading and their memories of favorite books from childhood. We read Walter Dean Myers’ brilliant essay, “Where Are the People of Color in Children’s Books?” and used Traci Gardner’s Cultural Relevance Rubric to assess books in the children’s section of our local public library. We learned a lot during our visit to the library. After Rhamiera searched the stacks for a book about someone like her (“a black girl in a big family who takes care of younger siblings”), she returned with an insightful critique: “So many of these books are about little slave girls. I don’t want to read about slavery!” Jonasia noticed that almost all the black female characters were shown with natural hair, and she wondered, “Don’t they know a lot of girls wear weave?”

Eventually, Rhamiera selected We Had a Picnic This Sunday Past by Jacqueline Woodson, and Jonasia found Princess Hair by Sharee Miller. However, their critiques point to some of the problems with the current body of children’s literature. While the number of children’s books that include people of color has increased significantly in the past 20 years, the majority still focus on historical figures or middle-class characters, leaving urban youth without a mirror of their lives. Books that show faces of color are not enough; Rhamiera and Jonasia insisted on books that resonated with their experiences and their culture. Reflecting on their critiques led me to learn more about the shift from culturally relevant pedagogy to Django Paris’ theory of culturally sustaining pedagogy, which acknowledges that culture is fluid and changing, and that students themselves can create and shape culture. I find it important to resist static notions of students’ cultures and instead engage students in questioning, defining, and analyzing their evolving cultural contexts.

Meanwhile, Ethan was looking for a children’s book about an Asian boy. After an hour at the library, he was still empty-handed. We asked for help from the librarian, who replied, “We normally have lots of Chinese books. I guess they’re all checked out.” This was a moment when our research sprang painfully to life. At the busiest branch of a well-established library in a major city, Ethan could not find a children’s book with a character who looked like him. Ethan, whose parents are Cambodian and Vietnamese, was also critical of the librarian’s assumption that all Asian characters are “Chinese.” In the end, Ethan settled for a book borrowed from a 10th-grade classmate, In Search of the Thunder Dragon, by Romio and Sophie Shrestha.

With these books in hand, we walked down the street to our neighborhood elementary school to meet with a group of experts on children’s literature—a class of 1st graders. After sharing the books they had brought, my students interviewed their 1st grade partners about their likes and dislikes, their favorite books, and their dreams for the future. Upon returning to our classroom, my students wrote reviews of the books they had shared with their partners. Several of their reviews were published online by a local news outlet. (See reviews by Ethan and Aniyah, Kareem and Samiere, and Tyasia and Cameron.) We hope that reviews like these will help authors, librarians, teachers, and publishers understand how important it is for kids to see themselves in books.

Finally, armed with notes from their interviews, my students set out to design books that would reflect their 1st grade buddies’ interests and experiences. All of their books featured a main character of color and an urban setting, both of which are underrepresented in children’s literature. My students also bested the publishing industry in gender representation. A 2011 study found that only 31 percent of 20th-century children’s books featured female central characters. In my students’ books, nearly half of the lead characters were strong females, including a “super grandma” who saves a city and a young woman who stands up to street harassment.

On the final day of the project, my students brought copies of their books to give to their 1st grade partners. Rhamiera brought her book about a little girl who rescues her pet dinosaur. Jonasia brought her book about a beautiful black princess. And Ethan brought his book about Ryan Lee, an Asian superhero who saves the elementary school from a monster attack. The 1st graders relished the attention of their high school buddies and the details of books tailored specifically to their lives and interests. And my 9th graders felt proud to add their work to the 1st grade’s classroom library.

In a world that continues to marginalize the voices of urban youth, my students chose to speak up. As Toni Morrison wrote, “If there is a book that you want to read, but it hasn’t been written yet, then you must write it.”

Kathleen Melville is a National Board-certified teacher and a founder of Teachers Lead Philly. She teaches at the Workshop School, a small public high school in West Philadelphia. She is a member of the CTQ Collaboratory.

“Having Students Analyze Our Classroom Library to See How Diverse It Is,” parts one and two

7 thoughts on ““Where’s My Story?”: Ideas for Teaching About Diversity in Books”

Who We Are
Requesting Review Copies
Lee & Low Books
END_OF_DOCUMENT_TOKEN_TO_BE_REPLACED