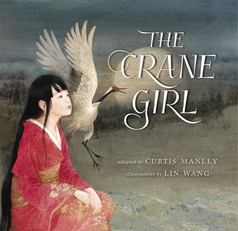 The Crane Girl, released last month, is an adaptation of a popular Japanese folktale about the power of friendship and kindness to transform lives. Told in both haiku and prose, The Crane Girl follows young Yasuhiro who rescues an injured crane in the woods one night. The next day, a mysterious girl appears at his door. She offers to weave silk for Yasuhiro and his father to help them with money, but eventually the father’s greed has a life-changing effect on them all.

To celebrate National Poetry Month, we asked author Curtis Manley to take us through his writing process when it comes to haiku, poetry, and The Crane Girl.

Many readers are intimidated by poetry or think it’s not for them. For people who find poetry difficult, where would you recommend they start? Do you have a short writing exercise that readers could do to help them?

If you find poetry intimidating or difficult or both, one good way to start can be to keep it personal—write about your own life and experiences. But don’t think that only big, dramatic events are worthy of poetry. Many of the things that are truly important and fulfilling to us are the common things we do each day, on our own or with the people we care most about.

Poet Frank O’Hara (1926-1966) was known for writing poetry during his lunch hours, often reacting to the day’s news or simply describing what he had done that morning (poetry historians call these his “I do this, I do that” poems).

Keeping notes of what you’ve been doing (whether in journal format, as lists, or as poetry) might lead to a poem that means something to you. Sometimes when you are writing, your thoughts will go off on a tangent that you didn’t expect; when that happens, keep writing and see where you end up!

Is there something people can do to be “good” at writing poetry? Do you get writer’s block and if so, how do you work through it?

A technique that some haiku poets use is to write down haiku “seeds”—individual observations that might work well as one part of a haiku (one line or two lines). Even if right now you’re not sure what to write for the other part of the haiku, you can go back to your collection of “seeds,” pick one, and remember when you wrote it. What else was happening? Can you add something that sets the scene, specifies the season, or indicates how you were feeling at the time?

Even if you are not trying to write haiku, keeping a written record of those individual observations can help you write longer poems or even prose. A good observation or detail is not useful if you forget it!

You probably won’t like everything you write. That’s okay. Every minute you spend writing—even if you think the time was wasted because nothing “good” came from it—is still practice for your “writing muscles.” Like everything else that takes practice, your writing won’t get much better unless you actually write.

Besides haiku, do you have any other poetry forms that you enjoy?

I also write longer “free verse” poetry, which doesn’t try to rhyme at the end of every line and doesn’t usually have one set rhythm from the beginning to the end.

My longer poems tend to be narrative—they tell a story about something that happened to me (recently or long ago). I also try to write the poem so that anyone can understand what is going on. I don’t use big words or fancy, complicated language, because I want every reader to think about the story, not about what words I’m using to tell it. The same is usually true for haiku—the writer hopes the reader gets directly to the experience the writer wants to convey, without the words getting in the way.

You’ve been writing haiku for several years now. Could you share one of your favorite haiku with us?

This is one I particularly like, for several reasons:

my daughter asks to take

A reader can understand this poem on different levels.

It can simply be about the time my daughter and I were walking along a fast-flowing stream and she wanted to use a different trail than the one we were on.

But it can also be about how children grow up quickly. My daughter wants to walk on the trail that I avoided for us, because I thought it was too steep to be safe, especially since slipping off the trail could mean being carried away by the water. Obviously, she doesn’t think it is too steep—it becomes a way for her to test boundaries.

In both of those ways of reading the poem, the first line sets the scene for the second and third lines, where the action happens.

But in addition to setting the scene, “rushing stream” can also refer to my daughter herself, hurrying to grow up as fast as possible—as kids often seem to want to do—with no way to hold her back…

When you were writing The Crane Girl, did you write the haiku first or the prose first?

As I wrote, when I reached a place in the story where I wanted to know a character’s thought, then I wrote a haiku for that thought before continuing the story. But I don’t mean to imply that it was just that easy! I changed my mind about which thoughts would show up as haiku, and I changed the haiku and moved them around. Of course, I also changed the rest of the story to make it better, make it clearer, and take out what wasn’t needed.

Another writer once pointed out that writing a first draft is like pouring sand into a sandbox. Revising that original draft (perhaps over and over again) is what lets you build sandcastles with all that sand you piled up. Revising is an important part of the writing process—just as important as that first draft. No first draft is ever perfect (I remind myself of this whenever I’m disappointed in one of my first drafts, which is usually!).

If you could turn into any animal, which one would you choose and why?

After answering these questions about writing, that’s hard to answer because we don’t know if any animals other than humans compose poetry in their minds. I wouldn’t want to turn into an animal and forever lose my connection to words.

But if I could turn into an animal for a while, I could write about the experience once I turned back into me. In that case, becoming a Sandhill crane for the spring migration from the southern U.S. to northern Canada would likely be amazing. I’ve always enjoyed watching from an airplane window while the ground passed by below, and this would be so much better—though likely more tiring having to use my own wings…

What do you hope readers take away from The Crane Girl?

I hope that most readers like the book and enjoy the magical feel of the story! I hope they also learn a little about Japanese folktales, haiku and related poetry, and the red-crowned crane.

I don’t consciously write stories with morals, but by showing different characters with realistic human strengths and weaknesses, the natural outcomes of their decisions are there to see—with allowances for a little magic…

Purchase a copy of The Crane Girl here.

Curtis Manley is is a full-time writer and a member of the Haiku Society of America. He enjoys watching the behaviors of birds and other animals—whether in his backyard or in the forests, deserts, and canyons of the western United States. In his travels, he always hopes to see a sandhill crane. Manley grew up in western Pennsylvania but now lives in the Seattle area with his wife and daughter. Visit him online at curtismanley.com.

Who We Are
Requesting Review Copies
Lee & Low Books
END_OF_DOCUMENT_TOKEN_TO_BE_REPLACED