This week, in acknowledgement of Columbus Day/Indigenous Peoples’ Day, we are offering a series of blog posts that look at pieces of history that have been hidden, silenced, altered, or swept under the rug. Today we would like to share eight of our alternative history titles.

This past Monday was Columbus Day in the United States, but for an increasing number of cities and states, this day no longer honors the man who “discovered” America; rather it celebrates Native Americans in the more aptly named Indigenous Peoples’ Day. With that in mind, we wanted to highlight eight of our titles that offer an alternative history from what is sometimes shown in school textbooks. From the McGraw-Hill fiasco to a Mexican-American studies textbook in Texas, learning about history is something that should involve several viewpoints and not just one group’s take on it.

Hammer of Witches, by Shana Mlawski

Baltasar Infante, a bookmaker’s apprentice living in 1492 Spain, can weasel out of any problem with a good story. But when he awakes one night to find a monster straight out of the stories peering at him through his window, he’s in trouble that even he can’t talk his way out of. Soon Baltasar’s journey takes him into uncharted lands on Columbus’s voyage westward, he learns that stories are more powerful than he once believed them to be—and much more dangerous. 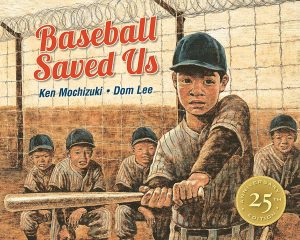 Baseball Saved Us, by Ken Mochizuki, illus. by Dom Lee

Shorty and his family, along with thousands of Japanese Americans, are sent to an internment camp after the attack on Pearl Harbor. Fighting the heat and dust of the desert, Shorty and his father decide to build a baseball diamond and form a league in order to boost the spirits of the internees. Shorty quickly learns that he is playing not only to win, but to gain dignity and self-respect as well.

John Lewis in the Lead: A Story of the Civil Rights Movement, by Jim Haskins and Kathleen Benson, illus. by Benny Andrews

How does an Alabama sharecropper’s son grow up to help change his world? For John Lewis the journey began as a boy experiencing the injustice of segregation and the inspiring words of Dr. Martin Luther King Jr. This book celebrates the life of a living legend of American history.

Through perseverance and determination, Ira Aldridge became one of the most celebrated Shakespearean actors throughout Europe. This story is a captivating tribute to his inspiring life, and to the renowned works of William Shakespeare.

This YA novel from TU BOOKS is a rich reimagining of Romeo and Juliet set in Texas during the explosive years of Mexico’s revolution. Filled with period detail, captivating romance, and political intrigue, it brings Shakespeare’s classic to life in an entirely new way.

Overcoming racism and resistance from his colleagues, Vivien Thomas ushered in a new era of medicine—children’s heart surgery. This book is the compelling story of this incredible pioneer in medicine.

Brothers in Hope: The Story of the Lost Boys of Sudan, by Mary Williams, illus. by R. Gregory Christie

Based on heartbreaking yet inspirational true events in the lives of the Lost Boys of Sudan, this is a story of remarkable and enduring courage, and an amazing testament to the unyielding power of the human spirit.

Let us know about your favorite stories that teach often overlooked pieces of history!

Who We Are
Requesting Review Copies
Lee & Low Books
END_OF_DOCUMENT_TOKEN_TO_BE_REPLACED