For Star Wars fans, there is much to celebrate. And for fans of diversity in Hollywood, even more so: the film features British-Nigerian actor John Boyega as one of the leads. Boyega has been getting a lot of buzz since his role was announced (along with some racist comments from the Dark Side – par for the course when it comes to diverse casting of franchises, it seems), and is joined by Guatamalan-American actor Oscar Isaac, who also plays a major role. Lupita N’yongo will also star as an alien pirate, though we won’t see her face.

Director JJ Abrams acknowledged the importance of casting diversely, telling 60 Minutes, “When we started casting the movie, it felt incredibly important to me that the movie look like the world in which this movie is being released.”

Given some of the great diversity in TV and films over the last year, the casting of Star Wars may not seem revolutionary. But historically, in the context of the top-grossing sci-fi movies of all time, it is still huge. Take a look: 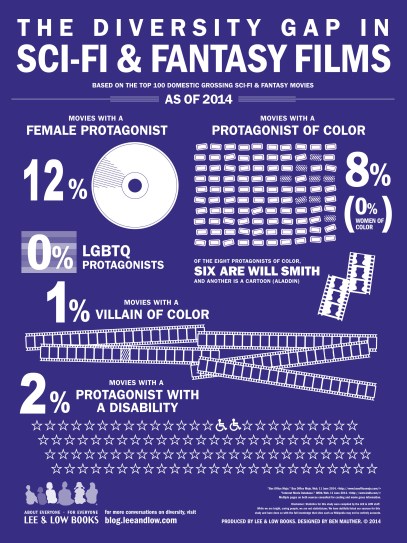 Here are some key statistics based on the top 100 domestic grossing sci-fi and fantasy movies:

• 8% of films star a protagonist of color

• Of the 8 protagonists of color, all are men; 6 are played by Will Smith and 1 is a cartoon character (Aladdin)

• 0% of protagonists are LGBTQ

• 2% of protagonists are people with a disability

If Star Wars becomes one of the top-grossing movies in this genre of all time–which it is certainly on track to do–it could put a dent in some of these numbers. And just as importantly, it will give Hollywood yet more proof that audiences are ready and willing to see great blockbusters with diverse leads. Star Wars, all we can say is: May the force be with you.

One thought on “Star Wars in Perspective: The Diversity Gap in Sci-Fi Movies”

Who We Are
Requesting Review Copies
Lee & Low Books
END_OF_DOCUMENT_TOKEN_TO_BE_REPLACED