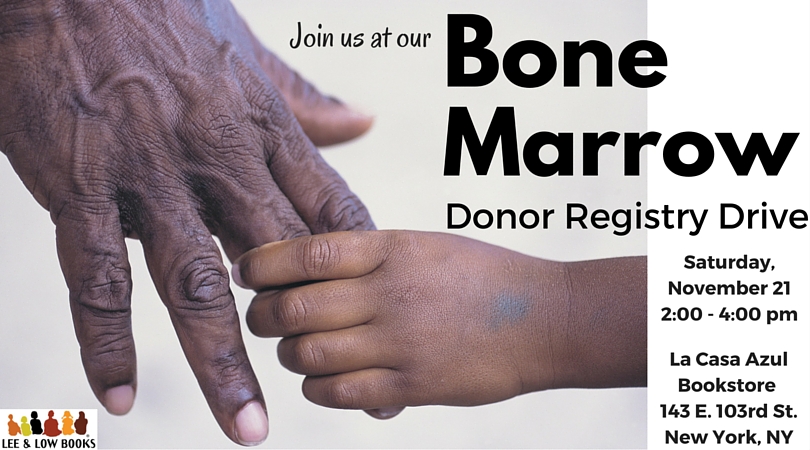 We’re excited to share that we will be partnering with local businesses, organizations, and community members for a bone marrow donor registry drive this Saturday, November 21 from 2pm to 4 pm at La Casa Azul Bookstore in East Harlem, New York City.

The drive will highlight an issue of major importance within the multiracial community: the lack of bone marrow donor matches. For patients diagnosed with leukemia, lymphoma and other life-threatening diseases, a bone marrow transplant may be their best or only hope for a cure. Yet 70% of patients who need a transplant to do not have a matched donor in their family, and for multiracial people, finding a match can be especially hard.

That’s because bone marrow donors must be extremely genetically similar to recipients. As this Time Magazine article explains,

Compared to organ transplants, bone marrow donations need to be even more genetically similar to their recipients. Though there are exceptions, the vast majority of successful matches take place between donors and patients of the same ethnic background. Since all the immune system’s cells come from bone marrow, a transplant essentially introduces a new immune system to a person. Without genetic similarity between the donor and the patient, the new white blood cells will attack the host body. In an organ transplant, the body can reject the organ, but with marrow, the new immune system can reject the whole body.

Because Caucasians make up the majority of people in the donor registry, Caucasian patients often have the best chance of finding a match. Chances for patients from other ethnicities can be as low as one in four. But chances for multiracial patients are often the lowest of all, with only 3% of registered donors self-identifying as multiracial or mixed race.

Becoming a potential bone marrow donor is quick and easy: all it involves is a simple cheek swab. Donors are then added to the bone marrow registry database–the larger the database, the more likely that every patient can find a match.

If you’re in or near New York City, we hope you will come out and join us! Here are the details:

The first 50 donors will receive a multiracial crayon pack in appreciation for their support!

Be the Match has a registry of nearly 12.5 million volunteers ready to be life-saving bone marrow donors. Because there are patients who can’t find a match, Be the Match encourages more people to join the registry and to be there when they are called as a match.

Project RACE advocates for multiracial children, multiracial adults, and their families primarily through education and community awareness. It supports policies that make a positive impact on people of multiracial heritage at local, state, and national levels. Project RACE is active in the effort to find bone marrow donors for multiracial people and sponsors countless donor registry drives throughout the United States.

Lee & Low Books is the largest multicultural children’s book publisher in the country. It is also one of the few minority-owned publishing companies in the United States.

Alex Barnett is a comic and writer from New York City. He also is the host of the podcast Multiracial Family Man that explores issues of concern to multiracial people and families.

Bryony Sutherland and Sarah Ratliff, authors of the book Being Biracial: Where Our Secret Worlds Collide, a collection of stories about what it means to be more than one ethnicity.

Who We Are
Requesting Review Copies
Lee & Low Books
END_OF_DOCUMENT_TOKEN_TO_BE_REPLACED