In this post, Tu Books Publisher Stacy Whitman discusses why avoiding discussions of race with young people can do more harm than good.

Many African American parents already know what “the talk” is. It’s 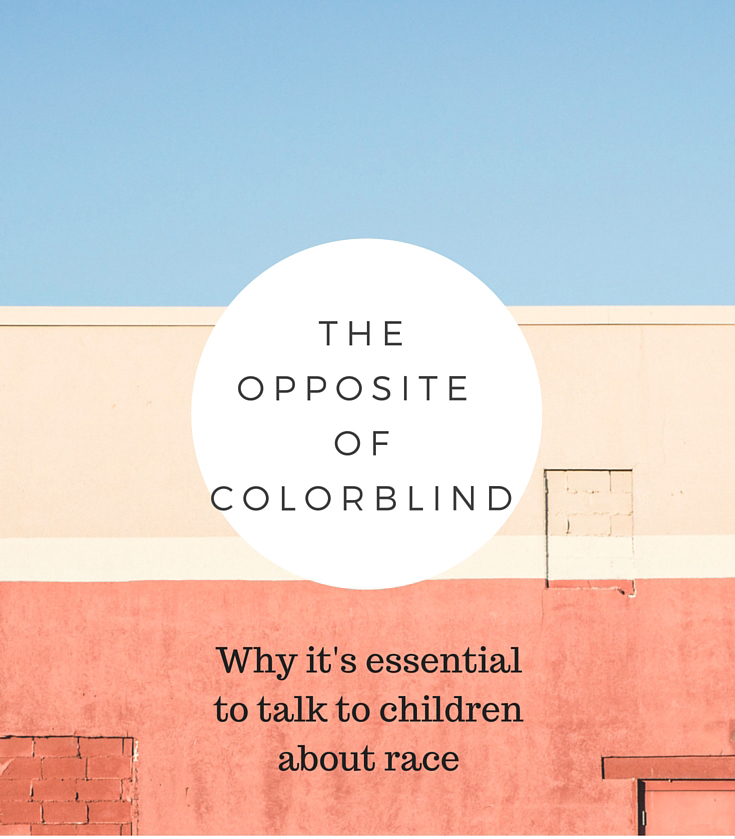 not the talk that many white parents might expect—we’re not talking about the birds and the bees. No, this “talk” is the one where black parents have to sit with their children and discuss how they might be perceived by the world around them: particularly police, but also teachers, neighbors, and friends who are not from their racial background.

Though the burden often falls on parents of color alone to discuss these issues with their children, in reality all parents should address race with their kids in a conscious and meaningful way. Communities are also seeking ways to address interpersonal racial issues,
particularly in schools. Having the tools to know how to discuss racial matters is essential for children from all backgrounds.

Research has shown that the “colorblind” approach—teaching children that it is racist to acknowledge racial and ethnic differences—is doing no one any favors, and in fact can reinforce racist attitudes and assumptions, and especially reify systemic racism. “Black children know irrefutably that they’re black by the time they’re about 6 years old and probably earlier,” one article noted in our research. Do white children know they’re white? If not, how do they think of themselves?

At Lee & Low, we’ve always believed that even the youngest readers have the capacity to understand and appreciate difference—that’s why many of our children’s books address issues like racism and discrimination. But you don’t have to take our word for it: many experts, educators, and academics have done work on this topic as well and their recommendations can help point parents and teachers in the right direction.

“Young children are hard-wired in their brains to notice difference and to categorize it. So it is vital during early childhood to put some context around making sense of differences,” said Shannon Nagy, preschool director in 2011 at Lincoln Park Cooperative Nursery School in Chicago.

Studies have also shown that not addressing difference does not make children colorblind—it only encourages them to absorb the implicit racial messages of American society. Children learn that race is a category even when parents try to teach them not to recognize race. Much like children learn to perform regional accents even when their parents are from another location, children learn 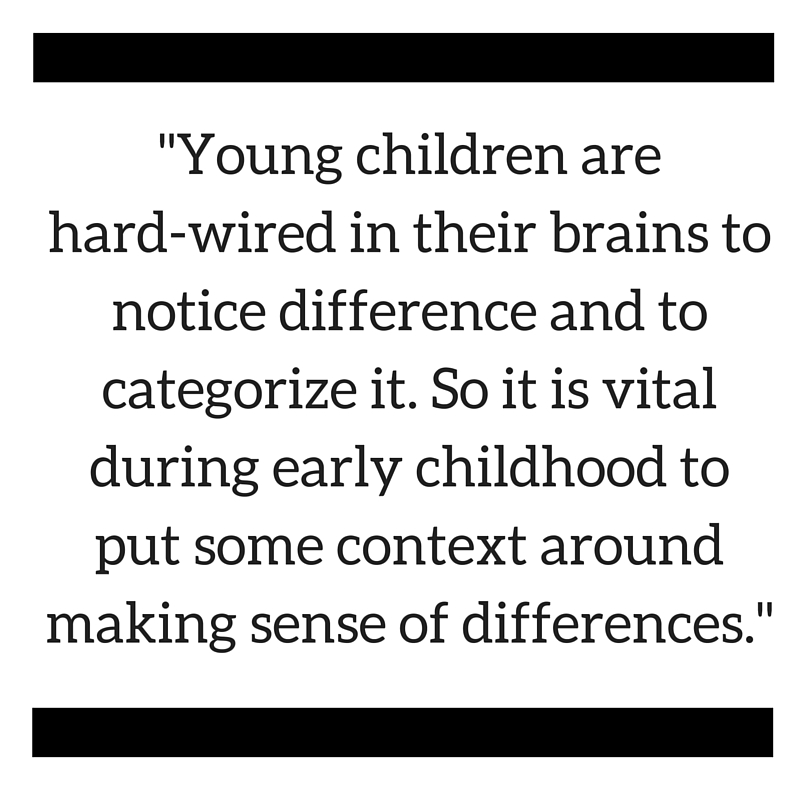 how the larger society around them views race, via inference and transductive reasoning. “In other words, children pick upon the ways in which whiteness is normalized and privileged in U.S. society.”

Teaching children to be “colorblind” has led children (and adults) to believe that it’s rude or racist to even point out racial differences—even kids of color. This makes it exponentially harder to have frank discussions about racial issues when they need to be had.

“Nonwhite parents are about three times more likely to discuss race than white parents,” said a 2007 study. “It’s the children whose parents do directly address race — and directly means far more than vaguely declaring everyone to be equal — who are less likely to make assumptions about people based on the color of our skin.”

One study even had white parents dropping out of the project when the researchers asked them to discuss racial attitudes with their children, even when they went into the study knowing that it was intended to measure children’s racial attitudes.

Many argue that “the talk” should happen far more often than once, and that parents shouldn’t bear the sole burden to teach their kids about race—that it is a community-wide issue.

Erin Winkler provides several ways for parents and teachers to address the biases that children might pick up, including discussing 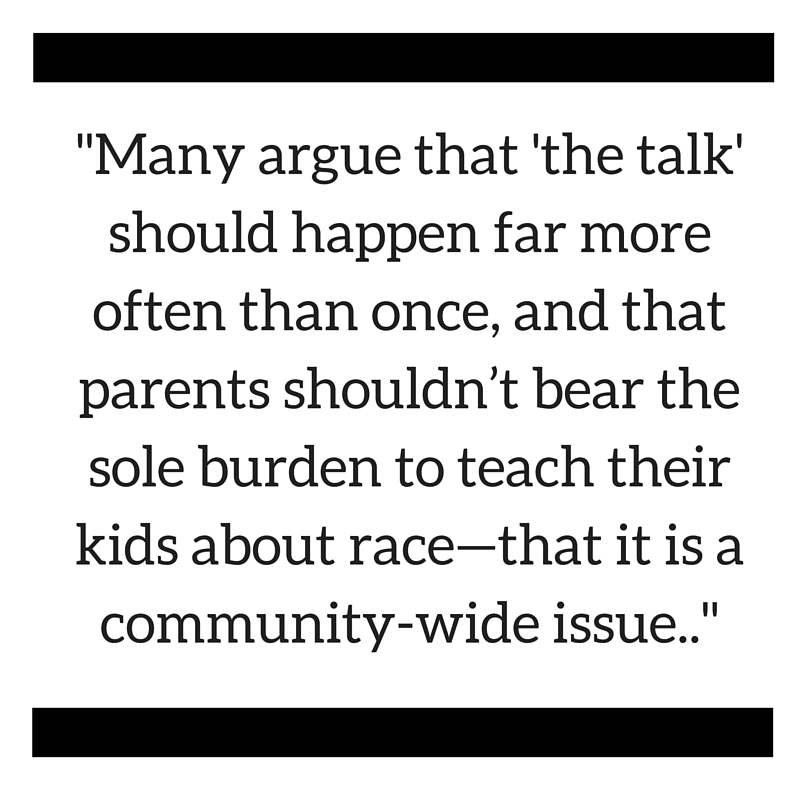 the issue in an age-appropriate way, with accurate information that doesn’t shame or silence children for having questions. They also suggest encouraging complex thinking and taking children’s questions and biased statements seriously—“When children are taught to pay attention to multiple attributes of a person at once (e.g., not just race), reduced levels of bias are shown,” the author notes, and suggests that the most important thing parents and teachers can do is to give children information that empowers them to be anti-racist.

One New York City-area school asked, “Can racism be stopped in the third grade?” They began a “racial affinity program,” in which elementary-age kids were sorted by racial groups for discussions of questions that “might seem impolite otherwise,” and to then come together as a school community to discuss these questions and experiences in a way that fosters greater communication. Parents and students are mixed on whether this program succeeded, with Asian students noting that the discussions of race still focused on the dichotomy of black and white, and some parents uncomfortable with the idea of discussing race at all. The administration notes, however, that many of their students of color needed this program—mandatory for all students—to combat microaggressions between students.

Allie Jane Bruce, the librarian at Bank Street School in New York City, has been discussing race, biases, and stereotypes with the students in her school for three years, using children’s book covers as a launching point. “I’m constantly delighted by the new discoveries kids make, and by the wisdom and insight already present in 11- and 12-year-olds,” Bruce noted in her most recent series of blog posts about the curriculum, which she has named “Loudness in the Library.” She notes especially that kids at this age tend to feel very uncomfortable with discussing race at first. “The fact that race-related conversations are so very fraught is a huge part of the problem. We must be able to communicate in order to solve problems that exist at interpersonal, institutional, and societal levels. If kids in 6th grade already have the inclination to stay silent in conversations on race, how much stronger will that inclination be in adults? And if we can’t talk about race and racism, how will things ever get better?”

Parents, what does “the talk” look like in your home? Teachers and librarians, how do you approach discussions about race with your students and patrons?

Stacy Whitman is Editorial Director and Publisher of Tu Books, an imprint of LEE & LOW BOOKS that publishes diverse science fiction and fantasy for middle grade and young adult readers.

8 thoughts on “The Opposite of Colorblind: Why it’s essential to talk to children about race”

Who We Are
Requesting Review Copies
Lee & Low Books
END_OF_DOCUMENT_TOKEN_TO_BE_REPLACED