Another year, another successful ALA annual! We were so excited to be in San Francisco this year, especially in light of the recent SCOTUS ruling on gay marriage! What better city to be in than the one that elected Harvey Milk to public office and issued marriage licenses to same-sex couples in 2004, kickstarting a fight for LGBTQ marriage rights in California?

We started off the conference with some great news: Foreword Reviews named us Indie Publisher of the Year 2014! We were thrilled and humbled by this honor. You can see what they said about us here. 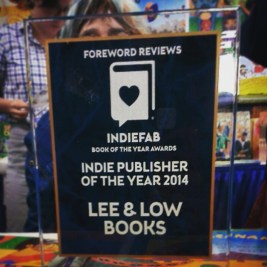 We had a full signing schedule, including award-winning authors and illustrators, and a couple of debut authors. Another highlight was getting to meet many of our Children’s Book Press authors and illustrators who are based in California. We’ve often only emailed back and forth with them, so it was nice to finally meet in person!

We were also excited to see Frank Morrison honored at the Coretta Scott King breakfast for his illustrations in Little Melba and Her Big Trombone! He wrote a moving speech about breaking out of the mold, as Melba did:

I was dazzled by this six year old [Melba] hearing the rhythm and beats in her head. I believe this is true for all artists. First you have to have the love, then passion, next discipline, tenacity, and bravery. I truly believe this is what took Melba from performing on the steps with her grandfather in front of a dog at seven years old to performing in front of thousands on stages around the world. Let’s all encourage our youth to recognized their gifts and if they don’t fit the cookie cutter,
Break! The! Mold! Publisher Jason Low participated in an Ignite Session with a presentation called “Diversity’s Action Plan,” a five minute talk packed with big ideas about how to create change in the publishing industry. If you missed it, you can watch all 5 minutes right here:

One key takeaway: we’re asking people to sign a petition for publishers to participate in our Diversity Baseline Survey, which will measure staff diversity in the publishing industry and give us a benchmark for improvement. If you haven’t signed yet, please take a minute to do so. We’ve now surpassed 1,500 signatures!

Valynne E. Maetani, debut author and winner of Tu Book‘s New Visions Award, was at the Pop Top stage to talk about her new YA mystery novel, Ink and Ashes. Afterwards, she signed books at our booth, and completely sold out!

It was a lot of fun to meet everyone and enjoy San Francisco, and we’re looking forward to Orlando next year!

What were your ALA highlights? Let us know in the comments!

One thought on “ALA 2015 Recap: Wins in Diversity”

Who We Are
Requesting Review Copies
Lee & Low Books
END_OF_DOCUMENT_TOKEN_TO_BE_REPLACED