Released in September of 2014, Little Melba and Her Big Trombone is the story of Melba Liston, a little-known but trailblazing musician who broke gender and racial barriers to become a famed trombonist and arranger. We interviewed author Katheryn Russell-Brown to get a better sense of the research that went into writing the book.

Were you able to talk to any of Melba’s friends or family when doing research for the book? If so, what was that like?

Katheryn Russell-Brown: Yes indeed. I spoke with Leslie Drayton who co-led a band with Melba. Melba did not have children of her own, but she considered Leslie her “musical son.” He talked to me about Melba’s personality, how she carried herself and some expressions she used. I still keep in touch with him.

What jazz music did you listen to while working on this story?

KRB: Melba recorded only one lead album, “Melba Liston and Her ‘Bones” (1958). I listened to it many, many times while writing and revising Little Melba.

What aspects of Melba’s story inspired you to write this story for children?

KRB: The more I read and learned about Melba Liston, the more impressed I was with her talent. By every account she was a phenomenal arranger and a master trombone player.

Melba’s mother and grandfather play a large role in encouraging Melba’s trombone playing. What word of advice would you give to parents to encourage their children’s talents or interests?

KRB: What I love is that Melba’s mother, Lucille Liston, followed Melba’s lead even though she wasn’t thrilled with Melba’s choice of instrument. She thought the trombone was too big and that it wasn’t for girls! However, at Melba’s urging, her mother bought the trombone and supported her throughout her career.

What aspect of Melba’s story do you think is especially relevant for young people today?

KRB: Try to find something you love to do and do your best with it.

What’s one fact about Melba you learned that didn’t make it to the book?

KRB: Melba appeared in two major motion pictures. In “The Prodigal” (1955), Liston played the harp and appeared in scenes with Lana Turner. She was also a member of the palace orchestra in “The Ten Commandments” (1956). 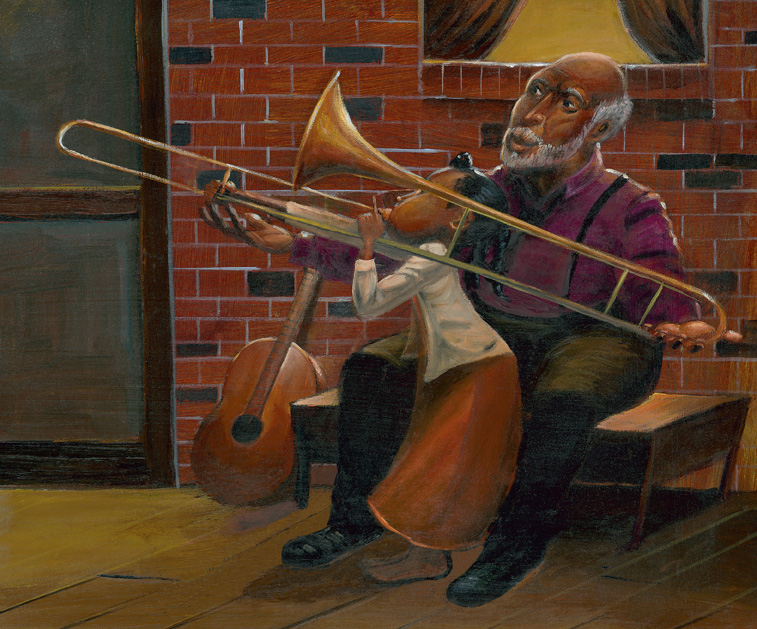 How difficult is it to play the trombone?

KRB: As I write in Little Melba, “the trombone was no piece of cake.” First, holding it properly is a challenge. Second, it’s heavy, long, and bulky. Third, you have to purse your lips just right, move the slide, and blow!

Even though Melba quits playing the trombone for a while, she eventually returns to it. What would you say to young people that are thinking of quitting something they enjoy doing or are good at?

KRB: If you’re going to quit, quit for the right reasons! Don’t quit because something is hard or challenging. If, however, something that brought you joy is no longer bringing joy, it’s OK to take a break.

Melba loved music and really loved the trombone. However, being on the road was tough for her—times could be tough and sometimes she felt lonely. After going on tour with jazz singer Billie Holiday, Melba decided to take a break. She got a job as a clerk for the Los Angeles Board of Education. She was lured back to music when Dizzy Gillespie asked her to re-join his orchestra and travel to South America.

In addition to your work as a children’s book writer, you are also a Professor of Law and Director of the Center for Race and Race Relations at the University of Florida. How do you think your work as a professor informed the way you decided to tell Melba’s story?

KRB:It certainly did inform my approach to writing Little Melba. I love doing research and I love writing, re-rewriting, and editing.

5 thoughts on “Interview: Katheryn Russell-Brown on the research behind Little Melba and Her Big Trombone”

Who We Are
Requesting Review Copies
Lee & Low Books
END_OF_DOCUMENT_TOKEN_TO_BE_REPLACED