But the event took a bad turn when the MC for the night, Daniel Handler (better known as Lemony Snicket), followed up Woodson’s acceptance speech with these comments:

Handler: I told you! I told Jackie she was going to win. And I said that if she won, I would tell all of you something I learned this summer, which is that Jackie Woodson is allergic to watermelon. Just let that sink in your mind.

And I said, I am only writing a book about a black girl who is allergic to watermelon if I get a blurb from you, Cornell West, Toni Morisson, and Barack Obama saying, “this guy’s ok! This guy’s fine!”

Video here (those comments start at about 39:00)

Author David Perry does a good job on his blog explaining why Handler’s comment is so problematic, so I won’t go into that too deeply. If you’re curious about the history of the watermelon stereotype and why it’s racist, this Atlantic article linked by Perry gives a good rundown. Suffice it to say,  it’s not a nice thing to make jokes about, and particularly not a nice thing to make jokes about in reference to a very talented author when you’re a white man hosting an award ceremony. In front of a huge audience.

But what I really want to talk about is not Handler himself (who, yes, has issued a short apology via Twitter, the first choice Apology Outlet for all those who have made tasteless jokes) but the larger publishing community. Because the joke may have been Handler’s, but the environment which made a joke like that permissible is everyone’s problem and responsibility. It’s well known and well documented that publishing is, to put it lightly, homogenous. According to Publisher Weekly’s most recent salary survey, around 89% of publishing staff identifies as white/caucasian. That means, in a country where nearly 40% of the general population is comprised of people of color, only 11% of publishing staff are—and, I’d venture a guess, probably even less when you start looking at management roles.

Publishing is also notorious for being totally out of touch with diversity and race issues. Take a look at the low numbers of books published by/about people of color over the last 18 years: 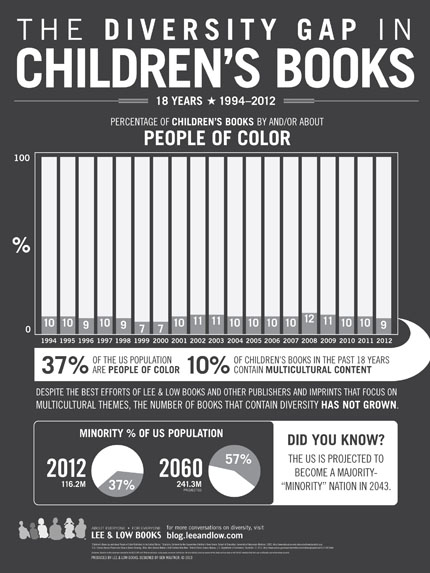 Yet, in this year’s salary survey, almost 40% of respondents were neutral or actually disagreed with the statement, “The publishing industry suffers from a lack of racial diversity.” As my grandma likes to say, Denial ain’t just a river in Egypt.

Publishing routinely treats people of color poorly in so many ways: limiting the number of diverse books they will acquire, giving those books meager marketing budgets, whitewashing covers, creating all-white lineups at major book events…the list goes on and on. So it’s really no surprise that Handler would feel that his joke might play well to the largely white and racially unaware audience sitting in that room. And he was right, because people laughed (and, hey, The New York Times even called him “edgy”! Thanks, New York Times!)

An apology from Handler is nice, but that won’t stop this kind of thing from happening again. What is required is a true commitment from publishing: to right wrongs, to make concrete and sustainable efforts to be inclusive, to educate staff on the nuances of racism and privilege and to move toward a state of deeper understanding. There are certainly many individuals within publishing who are already committed to these things. But whether the industry as a whole will ever commit, and what it will take for them to do so, is a question I just don’t know the answer to.

In the meantime, readers and authors aren’t willing to wait, and that’s one big reason why the We Need Diverse Books campaign has done so marvelously. As of today, the campaign has raised over $108,000 to fund various projects that will increase diversity in books. That money is proof that a lot of people care and won’t let the publishing status quo, which hurts so many, reign supreme. I hope publishers will be willing to work with them on many of the initiatives they’ve developed.

In a great speech on sexual abuse in the military, Army chief Lt. Gen. David Morrison said, “The standard you walk past is the standard you accept.” I think that goes for all of us. Hey, publishing, we’ve all walked past a lot of things. Let’s not walk past this too.

Who We Are
Requesting Review Copies
Lee & Low Books
END_OF_DOCUMENT_TOKEN_TO_BE_REPLACED