This is a post by our literacy and sales assistant, Veronica Schneider.

It was no major surprise who the big winners were on Monday evening’s 66th Primetime Emmy Awards, with Breaking Bad totaling five awards and Modern Family winning Best Comedy Series for the fifth consecutive year.

More importantly, the 2014 Emmy Awards really shocked us all by showing how progressive and diversified television has become.

We need to look beyond the fashionable red carpet looks and the Hollywood glam and instead discuss what is plainly missing: diversity. Diverse television may pull in viewers with hit shows like Sleepy Hollow, Orange is the New Black, and Scandal, but it isn’t necessarily being rewarded. In an interview with KCPP Radio,Darell Hunt, Director of UCLA’s Ralph J. Bunche Center for African American Studies, said, “So far we haven’t seen a translation where the awards program reflects the increasing variety of things that are actually being made for the small screen.”

Not one person of color won in any of the lead or supporting actor/actress categories, with only 6 total African Americans amongst the 54 white nominees. Many were hopeful that Kerry Washington would take the win for Outstanding Lead Actress in a Drama Series for ABC’s Scandal – she would have been the first African American to win in this category. Add to this the troubling fact that, as we reported last year, an African American woman has not been nominated for Outstanding Lead Actress in a Comedy Series since The Cosby Show (1986). Uzo Aduba, who plays ‘Crazy Eyes’ on Orange is the New Black, did take home an Emmy for Guest Actress in a Comedy, but that category was not part of the Prime Time Emmys and went largely under the radar.

Although we were certainly applauding Cary Joji Fukunaga’s win for Directing in a Drama Series for True Detective, people of color overall held a 22% representation in the directing categories.

Women were also not exempt from underrepresentation at the Emmys. According to the Women’s Media Center (WMC), 26% of the nominees were women, highlighting the consistent lack of representation maintained from the 2013 Emmy Awards’ 26.5% makeup of women nominees. Out of 62 possible award categories, 16 completely failed to include women. But wait, this isn’t the first time this has happened. Yes, according to the WMC, this is the third consecutive year that 16 categories were void of women. Oops.

Maybe that is why many viewers were not laughing as Modern Family actress, Sofia Vergara, slowly spun on a revolving platform while Bruce Rosenblum, CEO and Chairman of the Academy of Television Arts and Sciences, spoke about the academy being “more diverse than ever before.” While some found this play on sexual stereotypes humorous, the attempt at irony may not have been as successful for others who criticized the Academy for the cringe-worthy objectification. Instead, this failed attempt at irony reminded audiences of the still relevant and persistent issue of sexism and gender disparity.

“What a wonderful time for women in television,” Julianna Marguiles declared as she accepted her Emmy for Outstanding Lead Actress in a Drama Series for The Good Wife.

We agree. There is more opportunity and diversity in television today, but it isn’t reinforced loud enough in what is being rewarded. Here is last year’s infographic on the diversity gap in the Emmy Awards: 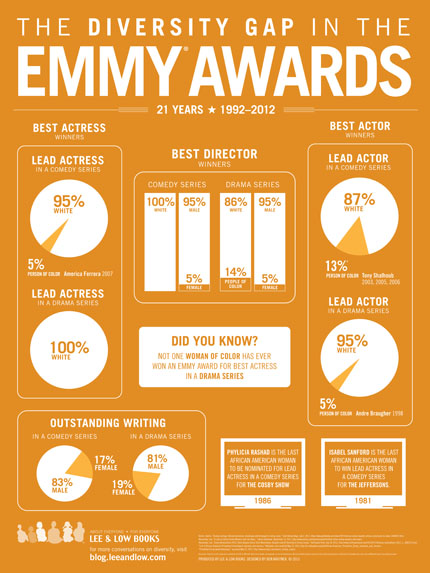 Since then, the numbers haven’t changed. Let’s hope 2015 will be the year that moves the needle.

4 thoughts on “Is TV getting more diverse? Not by the look of this year’s Emmys”

Who We Are
Requesting Review Copies
Lee & Low Books
END_OF_DOCUMENT_TOKEN_TO_BE_REPLACED